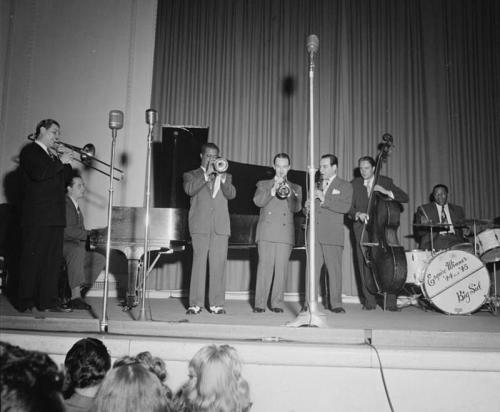 I will have more to say about Hackett and Teagarden in the future, but I was just searching through the happy disorder I create around my computer — a heady mix of papers, minidiscs, and compact discs — for something pleasing to listen to.

What I found pleases me so much that I am using my small perch in the Blogosphere to call your attention to it — a Capitol session, recorded on the West Coast, featuring Bobby and Jack with musicians they rarely recorded with — trombonist Abe Lincoln, clarinetist Matty Matlock, drummer Nick Fatool among others. This group made its living in the Hollywood studios and were sometimes brought together as the “Rampart Street Paraders” for Columbia. The under-recorded but always joyous Abe Lincoln, happy and in top form, whoops and shouts on trombone alongside Teagarden, much sleeker by comparison.

When this music came out on vinyl, it was called COAST CONCERT or COAST TO COAST. I got Hackett to autograph my copy, which I now treasure, but that’s another story. Hackett and Teagarden, perhaps drawn together by their love for melody, for immediately recognizable, personal sounds, by their reverent devotion to Louis Armstrong, never played better than when in tandem. Teagarden, who could often return to his one solo — a beautiful creation which he tinkered with for nearly forty years — seemed to be thinking, not remembering, when he stood next to Bobby.

Hackett didn’t need much inspiration: he could create luminous traceries in the sunset sky surrounded by the most dire musicians — but he sounds tremendously inspired here, even for him. How did “little Bobby Hackett,” as Louis called him so affectionately, always find “those pretty notes”? It’s a mystery — but investigating the Why and the How could make for hours of deeply rewarding listening.

Hear what the two horns do on a slow, meditative “I Guess I’ll Have To Change My Plan,” which stands next to any jazz ballad ever recorded. Play it after Bix’s “I’m Comin’ Virginia,” Bird’s “Lover Man,” Hawkins’s “Body and Soul,” and there’s no letdown. It’s so simple, too: Hackett improvises an introduction; Teagarden plays a soulfully embellished chorus; there’s a modulation into a higher key, bringing on Hackett for his chorus, backed by the quietest of simple backgrounds. One more modulation, and Teagarden returns for the song’s final eight bars, with an extended ending which leads into a cadenza. Listen to it for the tonal beauties both men get out of what are really unforgiving lengths of brass tubing, for the humming organ tones of the other horns, for the sympathetic rhythm section — but DO listen to it. And any musicians, here or in Budapest, who pride themselves on what is now called “tradiitional jazz” or even “Dixieland,” should commit this music to memory.

And the photograph at the top of this post? A memorable thing in itself — I find the backs of those youthful heads particularly endearing, and would not crop them out for the world — but it is also a visual reminder that once, Virginia, groups of musicians calling themselves “All-Stars” were being accurate. It’s Town Hall, 1947, with Jack, Dick Cary, Louis, Bobby, Peanuts Hucko, Bob Haggart, and Big Sid. Bless them all.  And — for my most fashiob-conscious readers: catch the sharp two-toned shoes on Louis.  Class will tell!