WITH DISPATCH AND VIGOR (Thursday Night at Chautauqua)

Seven months ago, when I edged into blogging and sat down to write my first post, I was immensely pleased that I could tell people that Jazz at Chautauqua would be held, once again, in September.  It came to pass!  And last Thursday night, we heard four sets of informal, joyous jazz.  The setting was as close to ideal as anyone could want: a well-lit room full of cheerfully listening people, with the musicians set up, informally, on the same level.  No stage, no suits; buffet food and a well-stocked bar.  Outside this room in the Athenaeum Hotel was a wooden porch with comfortable chairs, from where you could see an expansive lake.  And the staff at the hotel was happily always at the ready.  (Here they resemble a barbershop quartet, although they never burst into song.)

Things began in a sly, understated way when the “faux frenchmen” took up positions at one end of the room.  They are an earnest, supple quartet of players from Cincinnati who model themselves after the Quintette of the Hot Club of France.  Yes, the quartet follows Django and Stephane in their love of beautiful melodies and hot rhythm, but they aren’t committed to reproducing cherished records note-for-note, a good thing.  After an ambling “Bye Bye Blackbird,” they eased into a sidling, slow-drag “Stompin’ at the Savoy,” and romping versions of “I Saw Stars” and “Limehouse Blues.”  Jazz party promoters here and abroad should take note: they’re a fine group.

The second set made me think I had died and gone to Heaven — no, strike that — to Jimmy Ryan’s, circa 1942, for one of Milt Gabler’s Sunday afternoon jam sessions photographed by Charles Peterson.  Led by Marty Grosz, guitar, vocals, and raillery, the band included Randy Reinhart, Duke Heitger, and Bob Havens on the brass, Dan Block and Bobby Gordon on reeds, Jim Dapogny on piano, and Arnie Kinsella on drums.  Generously filling a vacancy in the rhythm section, Andy Stein, most well-known for his Venuti-inspired violin capers, strapped his baritone saxophone on and took up a chair next to the piano, providing Rollini bass lines and climbing solos.  Marty was in good spirits, happy to be surrounded by friends, and took us back to 1936 with a jolly “Love Is Just Around the Corner,” which mixed a little Bing Crosby in Marty’s hot crooning with some Condon touches.  Usually sets are assembled so that the second song is slower than the opening rouser, but Marty kicked off a fast “Them There Eyes,” again singing the sweet, silly lyrics — inspiring Duke to great early-Louis flights of passion.  The Beloved, who had never seen Duke play before, leaned over and said, “His playing is clear as a bell!” 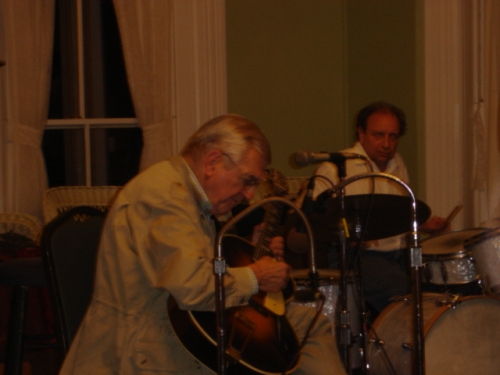 A trotting “Keepin’ Out of Mischief Now” followed, and the set concluded with a song Marty explained as the band’s tribute to Connie Francis, who, he said, had recorded a “maudlin, mawkish” version of it in her heyday.  I was momentarily mystified — Connie Francis isn’t usually hailed at jazz parties — but then the band swung into a ferocious version of “Who’s Sorry Now?” that owed its heart and soul to the Blue Note Jazzmen, nothing at all to Connie.  The soloists were so fine that it would take a whole page to celebrate them, but I still marvel at how Arnie’s thundering accents drove the band, how Dapogny’s right hand evoked the glories of Stacy and Hines, his left some of the magic of James P.  And the band worked hard — on the way out after the last song, a listener got up to shake Randy Reinhart’s hand, and I heard Randy say, “Now I can relax.”

A somewhat more pastoral set followed, with the front line of the inestimable Joe Wilder (now eighty-six!) on fluegelhorn and Bob Reitmeier on clarinet, whose easy lines complemented each other beautifully, making the most familiar pieces of jazz repertory, “Lady Be Good,” “Fine and Dandy,” and a ballad medley come alive.  Wilder continues to amaze: it’s not the simple matter of his age — playing a brass instrument is difficult for anyone — but the surprises he unfurls as he plays, his dancing, leaping phrases never going in predictable ways.  And he got the highest praise: when Joe was playing, Bob Reitmeier grinned at particularly felicitous inventions.

In one of those odd turns that jazz parties and jam sessions often bring, the elder statesman of the party (and of the brass world) was followed in the closing set by two immensely talented youths — Bix-inspired fellows from Wisconsin: Andy Schumm (cornet and piano) and David Bock (trombone), 22 and 20 respectively.

They were joined by players we know well: Rossano Sportiello on piano, Pete Siers on drums, and Dan Barrett on trombone.  Jon Burr, who had packed his bass, was prevailed upon to stay (another good thing!) and the session began.  It’s one kind of pleasure when a listener hears someone fine and familiar, another entirely when someone you’ve never heard steps onstage and proceeds to shine.  Schumm reveres Bix and can easily reproduce the nuances of that style, but he isn’t playing copies of the records.  Rather, he has somehow gotten inside the Bixian thought patterns, so that what comes out, alternatively hesitant and plunging, sounds like what Bix might have played had he been allowed to live into 1939.  On the one song the band played that was outside the Beiderbecke canon, “In A Mellotone,” Schumm drew upon a nicely tailored Mainstream approach, somewhere between Hackett and Harry Edison, always a reassuring combination.  His trombone playing friend, wearing a Gennett Records t-shirt, was more energetically rough-hewn, but he was no tailgater: his solos made Dan Barrett smile and applaud.  And Barrett was in fine form: not only playing smoothly and exuberantly, but taking an unexpected vocal, plaintive and casual, on “Louise.” 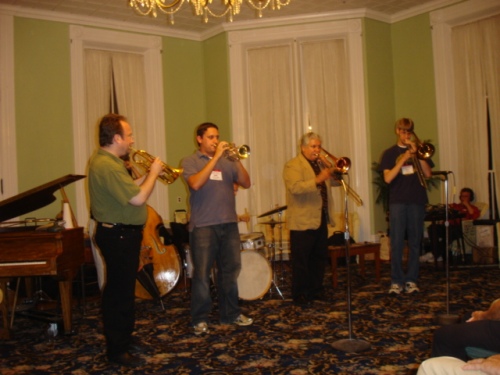 As the set was nearing its end, two moments happened that seemed to echo the great Hollywood fictions about jazz players in clubs — recall the scene in THE FIVE PENNIES where Danny Kaye, playing Red Nichols, comes back from drunken embarrassment to play extravagantly glowing phrases from the back of the speakeasy — phrases so compelling that he nearly steals the spotlight from one Louis Armstrong?  While the Wisconsin Bixians were playing, a once-exhausted Jon-Erik Kellso sat down next to me, put his horn together, and joined them, from the audience, moving on to the stage, on a very fast “Somebody Stole My Gal,” then leading the troops on an affectionate “Sugar,” and closing the set with “I’ll See You In My Dreams.”  At the same time, Dan Block was standing behind the piano, assembling his clarinet, joining the band in mid-chorus.  Wonderful additions to an already gifted band!  I had yet another occasion to note Kellso’s gentle, intuitive leadership.  He never says “Do this,” but he shapes a performance by suggesting riffs, backgrounds, and solos.  He is a great soloist with an architectural sense of the jazz band as small, flexible orchestra.  It’s the kind of thing Count Basie and Ruby Braff did so splendidly, and a band with Kellso in it has a certain loose-limbed intelligent order that it wouldn’t have otherwise.  When one player is soloing, the musicians don’t lean against the wall or tell jokes.  They become a living organism, and the music soars.

I’ll write about the highlights of the next three days (and there were plenty) in future posts.

P.S.  The inexplicable title?  That’s one of Marty Grosz’s stage jokes.  “We’ll do the next tune with dispatch and vigor,” he says seriously.  Gesturing to the left and right, to two musicians standing nearby, he then says, “That’s Dispatch, and that’s Vigor.”  English music-hall or Twenties vaudeville, I don’t know, but it makes me laugh every time.