BARBARA LEA AND JOHNNY WINDHURST, THEN AND NOW

One of the great pleasures of this not-for-profit enterprise is the connections that it creates and makes possible.  Sam Parkins writes about hearing Louis in 1945, then Ricky Riccardi does some detective work to track down the song Sam might have heard Louis play.

When I posted about Johnny Windhurst on January 8, it provoked some felicitous comments from musicians.  Today, I heard — indirectly — from Barbara Lea.  I say “indirectly,” because Barbara’s been ill of late, so her dear friend Jeanie Wilson wrote to me . . . which was a pleasure in itself — and sent these two photographs.  Barbara spoke of Johnny in the most glowing terms, much as she spoke of the late Dick Sudhalter, who joined her on a number of more recent sessions.

For those of you who don’t know all about Barbara Lea, I would direct you to her website (www.barbaralea.com) and then to Amazon to purchase the three CDs that contain the music she recorded with Johnny Windhurst, Dick Cary, Garvin Bushell, Ernie Caceres, Dick Hyman (as “Richard Lowman”) and others: BARBARA LEA, A WOMAN IN LOVE, and LEA IN LOVE.  (Details of these sessions can be found in the discography, nicely done, on Barbara’s website.)  The intuitive teamwork between Barbara and Johnny — intense yet delicate — summons up the celestial music that Lee Wiley and Bobby Hackett made on a precious few records.

The first photograph, as atmospheric as you could want, was taken during a 1956 Riverside recording session at Rudy Van Gelder’s studio — which was actually his living room, if you didn’t know.

When was the last time you saw a trumpeter or cornetist sweetly change the timbre of his sound with a felt hat?  (I saw Vic Dickenson put a beret over the bell of his horn, and the resulting sound was lovely, clear but far-away, as if heard in the forest.)

Here’s another snapshot of Johnny, from Barbara’s scrapbook:

And a beautiful portrait of Barbara herself in full flower: 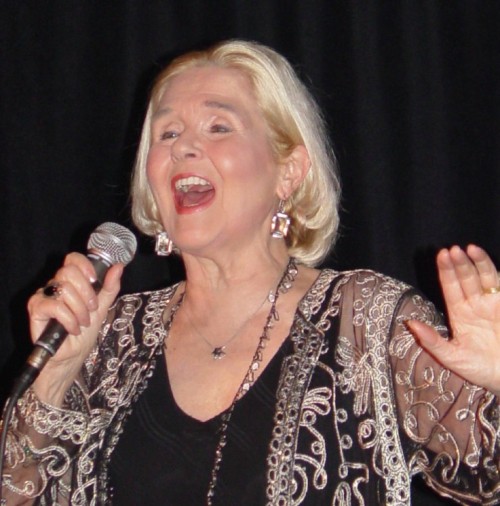 And just so you know that virtue is, in fact, sometimes rewarded:  Barbara is an alumna of Wellesley College, and they are honoring her with their Alumnae Achievement Award.

Who deserves it more?

One response to “BARBARA LEA AND JOHNNY WINDHURST, THEN AND NOW”