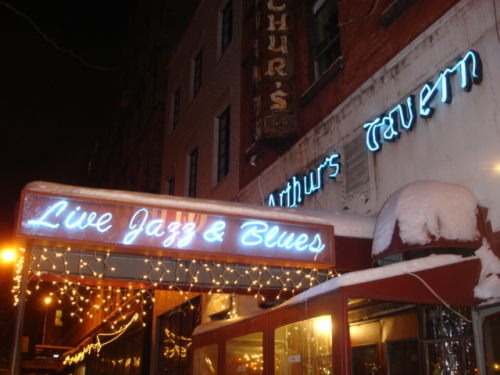 As fond as I am of the West Village, I can’t say that Grove Street is architecturally distinguished.  But it is memorable for the landmark shown above — Arthur’s Tavern — where pianist Bill Dunham has led the Grove Street Stompers for forty-seven years of Monday nights.  By even the most stringent calculations, that’s over seven thousand sets of loose improvised jazz, over seven thousand brief renditions of “Mood Indigo,” the song that the Stompers use as their closing theme.  I’ll leave it to Bill, who is charmingly gregarious, to list the great jazz players who have been regulars or guests in that astonishing long run.

Last night was a particularly unusual Monday for me: my college had closed itself down because of the snow, and I was unexpectedly free to hear some live jazz.  I hadn’t been at Arthur’s for some time, so I decided to visit an old haunt.  Bill had told me that his front line was going to feature cornetist Randy Reinhart and clarinetist Joe Muranyi, which was an inducement to brave the cold winds.  Bill would be on piano, and regulars Peter Ballance (trombone and general keeper-of-decorum) and drummer Giampaolo Biagi would be there.  Bassist Tim Ferguson and pianist-visitor Ron Ferry completed the dramatis personae.

The Stompers are a home-grown jazz band in the finest old style: drawing on a wide variety of material, they take medium-tempo jogs through spirituals, pop tunes, Tin Pan Alley classics, Condon and Armstrong favorites, and jazz evergreens.  Last night, “Dixieland” was represented by CHINA BOY, CHANGES MADE, DO YOU KNOW WHAT IT MEANS TO MISS NEW ORLEANS?, I FOUND A NEW BABY, JUST A CLOSER WALK WITH THEE, SWEET GEORGIA BROWN and a few more.  But the band’s range is happily broader: THE BEST THINGS IN LIFE ARE FREE, WININ’ BOY BLUES, OUT OF NOWHERE, and MY BUDDY lit up the place.

A word about “lighting up the place.”  The Tavern should be seen not only for the music, but for its general decor.  On the wall above my head, signs wishing me a Happy Halloween were much in evidence; over the bar’s cash register was a sign reading CLOSED, and strings of brightly colored lights — Christmas, probably — are always on.  The wine list is, shall we say, limited, but the amiable waitress was busy supplying everyone’s alcohol-related needs.  I was fortunate to be among friendly Spouses: Sonya Dunham and Nina Favara (Mrs. Reinhart) who were listening intently and cheering the band on.

And the music?  Well, the Stompers are the very antithesis of slick.  Yes, there is an occasional lead sheet passed around in case someone in uncertain about the chords on the bridge, but any arranging is done in the heat of the moment.  Last night, Randy decided, as he always does, to act as a prime mover, and he drove the band, choosing to play brass eight-bar trades with trombonist Peter, to leap into solos as if his life depended on it, to show off his beautiful command of the horn from bottom to top, mixing Berigan and Fifties Mainstream with delicacy and fervor.  Joe Muranyi, who’s seen many ensembles come and go, including Louis’s, was in fine quiet form, showing off his lovely chalumeau register.  The regulars — Bill, Peter, and Giampaolo — aren’t fancy, and their solos are concise, but they’ve got the feeling.  And Tim Ferguson, someone I’d not heard before, kept everything in good order and took nice resonant solos.

This musical convocation takes place from 7-10 on Monday nights, and worth the trip — just south of the Christopher Street / Sheridan Square subway stop.  The Stompers won’t necessarily be there for another forty-seven years, so you might well want to visit. 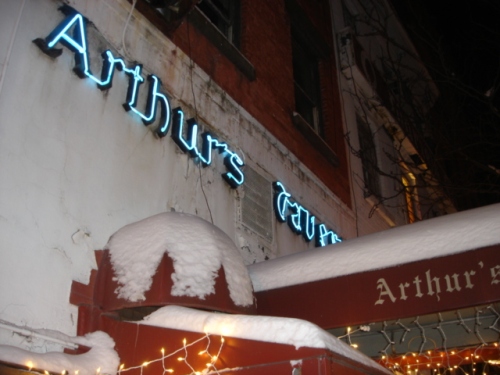