The world of jazz has lost one of its most talented pianists and I have lost a good friend.  Eddie Higgins’ life was brought to an end by complications of lymphatic and lung cancer, an event that seemed to have developed in a matter of a few months.  I had seen Eddie perform in Sacramento in late May, had dinner with him, and he showed no evidence or indication of what was to come in a few brief months.

Eddie was a generous and talented person in so many ways.  He not only played great piano, but he could write well and discuss matters outside of music in ways that were thoughtful and revealing.  Although he could be generous with his time, it took a while to crack the veneer of New England reserve that was part of his persona.  But the effort and the result was worth it.  Underneath was a man who was a gentleman in every sense of the word, a man of taste, a highly developed wit, and one hell of a pianist.

His career was established in Chicago during the 50’s, 60’s and 70’s where his longest running gig was a 12 year stint as the resident trio at the London House.  Eddie could play just about anything and with anybody, but he mainly stuck to Mainstream.  He once described Free Jazz as sounding like “a fire in a pet store.” Over the course of a number of years, he played with Stan Getz, Dizzy Gillespie, Coleman Hawkins, Jack Teagarden, Freddie Hubbard, Lee Morgan, Wayne Shorter, Al Grey and Eddie South. And that’s just the short list. Other well known piano trios that performed at the London House were intimidated by Eddie’s group. Some of the tales that came out of his London House experience were more than entertaining, such as the one involving Buddy Rich. Buddy was drumming like crazy but the customers were leaving because of the volume. The manager asked Eddie to turn down the amplifiers before everyone had left and Eddie did so – but Buddy caught him at it. Accusations were hurled at Eddie, Buddy drummed louder and threatened to get Eddie after the set. Sure enough, he came after Eddie and Eddie hightailed it into the restroom and locked himself in a stall. Buddy found the locked stall and proceeded to do a limbo under the door while Eddie vaulted over the top of the door and out the building. Later, each would avoid bringing up the event when their paths crossed.

Also during his Chicago years, Eddie was invited by Art Blakey to join his Jazz Messengers. Eddie refused because he had two young children at the time and it wasn’t a good time to go on the road. He also had an offer to become Carmen McRae’s accompanist but he turned down the opportunity for the same reasons and the job went to Norman Simmons. When further pressed for his reasons for turning down Blakey, he said that he didn’t want to be the odd man in the group. Eddie would have been the only white musician, the only non-user and Blakey had a habit of paying his connections before he paid his musicians.

Eddie’s versatility was amazing. During the 70’s he was exposed to some of the early recordings coming out of Brazil and was taken by the new rhythms of the Bossa Nova. Many of his albums include a track or two of a South American composition, but he also produced one of the finest albums of Jobim compositions that exists, “Speaking of Jobim.” If you haven’t heard it, you must.

There will be some who read this who will have no idea who Eddie Higgins was or how brilliantly he played. This won’t surprise me because Eddie traveled in certain jazz circuits and was probably better known in Japan and Korea, where his recordings on the Japanese Venus label are among the top jazz sellers. However, Eddie enjoyed deep respect among fellow musicians who admired him as a consummate professional. So, to those who might say, “Eddie, we hardly knew ye,” I understand. But to those who did know him, he was a national treasure and will be missed more than words can express. 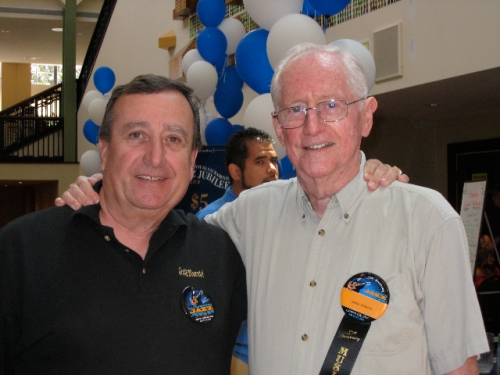 Bill and Eddie at Sacramento

About Eddie: he was one of those rare musicians who can make a melody, apparently unadorned, sing.  Any of his Venus recordings (solo, trio, or quartet) demonstrate that he was someone working beneath the surface of the music, giving himself fully to the song.  I also can testify to his gracious nature: having reviewed a Venus CD in Cadence (I believe it was his quartet with Scott Hamilton) I got a letter from Eddie, thanking me for what I had written in the most perceptive way.  I hope that more people come to his music as the years pass. 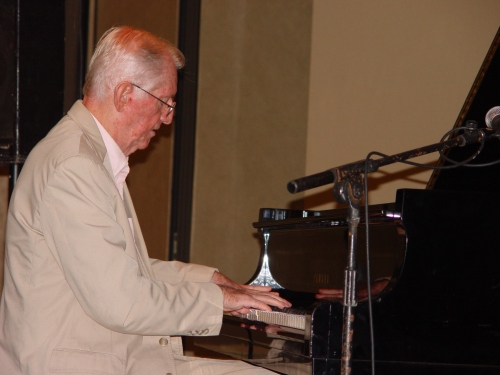 Eddie’s widow, the singer Meredith D’Ambrosio, sent along this piece on Eddie from the Chicago Tribune — http://www.chicagotribune.com/entertainment/music/chi-obit-ed-higgins-02sep02,0,1489219.story — a fitting tribute to a man who brought so much music to that city.  We send our condolences to Meredith and to Eddie’s family.  Thanks to Judith Schlesinger, Bill Gallagher, and John Herr.