The singer Hanna Richardson is one of our hidden treasures — lightly swinging, earnest without being over-serious, matching her mood to the song.  I’ve most often heard her alongside bassist Phil Flanigan (her husband), guitarist Chris Flory, and others of equal stature.  Here she is, cheerfully sweeping away the potential angst of Billie Holiday’s FOOLIN’ MYSELF, accompanying herself adroitly on the tenor guitar, with the nifty piano playing of Patti Wicks to keep things slyly rocking.  A treat!  And I was informed of this YouTube clip by another rare and splendid singer, Melissa Collard.

As the waitperson says when (s)he sets your salad down in front of you, “Enjoy!”

Agustin Perez Gasco is the sole proprietor of the wondrous blog MULE WALK AND JAZZ TALK.  Its website’s name, http://thereisjazzbeforetrane.blogspot.com., says a good deal about his ideological bent, one that I certainly share.

I am convinced that Agustin is the sorcerer of jazz paper — newspaper clippings, old magazines, anything remotely connected with wood pulp and swing. But he’s outdone himself this time.  See this 1929 advertising flyer, which contains multitudes: 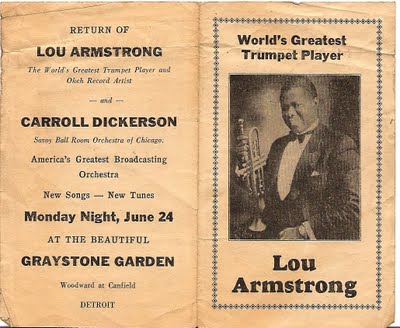 First, I was astonished by LOU.  Louis himself referred to Luis Russell on recordings as “Lou,” but I can’t think of an example on record where someone calls him (Mr. Strong) anything but Dipper or Papa Dip or Satchelmouth or Louis (pronounced Lew-is, not Loo-ie).    I like “Ball Room,” too: perhaps the printer thought it was more high-class to make it into two words.  And that picture, so distant to us now, was a fairly recent one of the star (who would be in front of “America’s Greatest Broadcasting Orchestra,” suggesting of course that they were on the radio.  Acetates, anyone?

I hope that the letter from Carroll and Lou brought many thousand friends in!  And that everyone, uplifted by a man who was “rarin’ to go,” with a trumpet “too tight,” was ready to sing I CAN’T GIVE YOU ANYTHING BUT LOVE — starting with the verse.

And, just when I was about to content myself with this “borrowing,” which I mean only to shine some light on Agustin’s noble works for those who might not know his blog, he came up with this one.

A scholarly study of Tommy Ladnier.  What?!

On his blog, I found out about this new book, published in a limited edition of 500 copies by two French jazz scholars — TRAVELING BLUES — devoted to the little-known but eloquent and short-lived trumpeter Tommy Ladnier, someone who recorded with Ida Cox, Lovie Austin, Sidney Bechet, and other luminaries.  Visit  http://www.jazzedit.org/Traveling-blues.html for details.  The book looks remarkably detailed; it can be purchased with a CD that contains (in mp3) form all of Ladnier’s 189 recordings.  It’s a delight that Ladnier should be so splendidly celebrated: he was a great, thoughtful player with deep feeling.  I’ll have more to say about this enterprise when my copy arrives!

Posted in "Thanks A Million", Ideal Places, Irreplaceable, Jazz Titans, Jazz Worth Reading, Pay Attention!, Swing You Cats!, The Heroes Among Us, The Real Thing, The Things We Love