THE WHOLE WORLD SMILES WITH YOU: MILDRED, 1935

With thanks to singer / guitarist Edward Lovett: 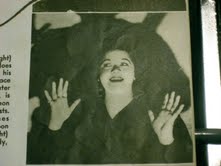 I wonder if this is a still from the 1933 Universal short where Mildred sings IS THAT RELIGION?

See for yourself in these two December 2008 performances recorded by Rae Ann Berry, where Clint triples on trumpet, guitar, and vocal, and Craig doubles on banjo and guitar.

I’LL SEE YOU IN MY DREAMS comes from Clint and Alisa Clancy’s jazz class / end of the year party:

IF I COULD BE WITH YOU (ONE HOUR TONIGHT) was captured at the less quiet Cafe Divine, but it a marvel nonetheless:

Craig doesn’t terribly much like to be called a “jazz” player, and he has little enthusiasm for modern guitarists who rely on Django reinhardt licks, but these two performances remind me — so delightfully — of the sides Django made in 1939 with the Ellingtonians Rex Stewart, BArney Bigard, and Billy Taylor.  Sweet, intense, heartfelt yet casual music.

Incidentally, both Clint and Craig have their own websites (on my blogroll) where you can not only see video clips but find out where they are playing next.

Had you asked me my opinion of the song MAIRZY DOATS, I would have been quick to call it an exquisitely stupid song.  And I still hold that opinion.  But great art has transforming force.

That’s the last song of a televised performance by the late Sir Humphrey Lyttelton and his band at the Brecon Jazz Festival — sharp eyes will note Scott Hamilton as part of that reed section.  And the personnel rolls by at the end.

But my eyes and ears are drawn to the aging — indeed, the aged Lyttelton — who had long since learned the lessons of beautiful earnestness, simplicity, and emotional directness.  All of that made his choice of material an irrelevancy, as he was busy wearing his heart on his sleeve, convincing an audience by passionate example that the notes he was playing at that very moment were the most crucial and moving notes in the world.  His art was stripped down to its barest — and most essential — things, in the manner of another trumpeter, someone named Louis.

This performance also proves one of my theories — learned by listening to Ruby Braff — that most melodies emerge as wondrous things when slowed down to ballad tempo.  Most jazz players accelerate their repertoire through the years, the opposite of what they might learn to do.

If you don’t find this a very moving two minutes — not because of infirmity to be pitied, but for majesty –I implore you to watch it once again.  I am awe-struck by what Sir Humphrey does here.  It will stay with me a long time.