That phrase is how cornetist Jimmy McPartland remembered the sound of Bix Beiderbecke’s playing.  It applies just as well to a book about Bix by the late Rich Johnson (with Jim Arpy and Gerri Blowers): BIX: The Davenport Album. 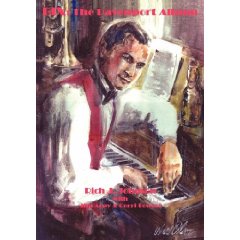 And an album is what this book is — nearly seven hundred pages of newspaper clippings, first-hand reminiscences, and photographs detailing Bix’s life and music.  Now, given that there have been a number of biographies of Bix, one might ask why such a book needed to be written.  But from the first page, it’s evident that Johnson was a masterful researcher, and that his diligence allows us to hear the now-silenced voices of people who knew Bix — primarily from his home town of Davenport, Iowa.  So it’s not the usual chronicle of gigs played, punctuated by comments from famous musicians.  (The book does, by the way, have comments from Bix’s famous colleagues, including Hoagy Carmichael, Armand Hug, Benny Goodman, Wingy Manone, and Louis Armstrong — but they are delightful ornaments to Johnson’s wider view.)

The people who knew Bix as a friend, a schoolmate, and a member of the community offer their voices and memories: many of them born in the earliest years of the last century.  These sweetly affectionate narratives make us see Bix anew: not simply as a phenomenal cornetist and improviser, but as the boy next door, one of the gang of kids.  The effect is very touching and intimate, as if we had been invited into their homes to drink tea and chat.

Here’s Leon Wermentein (1902-89): “I remember one Halloween night that he came to our neighborhood.  There was an old maid sourpuss everybody was scared to death of.  We dumped ashes on her porch and then rang the bell.  Bix was the last one to jump away a the door opened.  The old maid reached out, grabbed Bix and yanked him into the house.  Well, we didn’t know what would happen.  We all sat across the street staring at the house and wondering what she was going to do to Bix.  After about ten or fifteen minutes, the door finally opened and out came Bix carrying two big bags of cookies.  That’s the kind of guy he was.  He could win anybody over.  He was a charmer.”

We hear from Theresa Beyer (1911-2003) sister of Carlile Evans — in whose band clarinetist Leon Rappolo and cornetist Emmett Hardy played: “[Roppolo[ lived with us.  I remember many a night waking up and hearing him play clarinet.  He couldn’t read or write music, but boy, could he play.  The only thing . . . the only bad thing . . .he moked muggles, I think they called it.  My brother tried to get him to quit but he never did.”

Rolla Chalupa (1904-98), the Davenport postmaster, recalled Sophie Tucker’s appearances at the Columbia Theatre, where Bix (still in school) played cornet in the pit orchestra some nights and on weekends — and Tucker always introduced Bix as “the greatest trumpet player in the world.”

The book offers the sweet memories of Thelma Griffin, Bix’s Valentine in 1921: “I’m a pianist myelf and listeners tell me I have a different style.  It’s one that Bix taught me, how to play Somebody Stole My Gal, with a beat at the end where he’d come in on cornet.  Bix was just a wonderful guy.  I can’t believe some of the things they say about him today.  He and I were jut friends, even if the Valentine I’ve kept all these year does say To my sweetheart.  He was friendly, but shy.  I never dreamed that Bix would reach the status he did.  I moved to Springfield about the time he started on his road to the top bands.  We corresponded for a while, but I didn’t save his letters.  Sometimes I wish I had, now that he’s famous.”

And there’s more — the reminiscences quite affectionate, even Chet Salter, who remembered perhaps seventy years after the fact that Bix still owes him eight dollars for a pair of football shoes.

Of course, since some of the incidents of Bix’s life are less fortunate — his alcoholism for one — Johnson does not ignore them, and I learned more about the “cure” at the Keeley Institute than I had expected.  But the overall tone of the book is anything but tragic or critical: it is a generous, sometimes sprawling valentine to Bix from the people who loved him — as a person as well as a musician.

One response to ““AN AFFECTIONATE TONE””