Being at Club Cache (Sofia’s Ristorante) in the Hotel Edison is a very good thing on Monday and Tuesday nights when Vince Giordano and the Nighthawks are playing.  It was especially good this past Tuesday when Bob Barnard came and sat in.

But the surprises didn’t end when Bob sat down.  Vince called on the fine singer Molly Ryan to do an impromptu number.  Her choice was I CAN’T GIVE YOU ANYTHING BUT LOVE — with an appropriate full-chorus solo from a tall fellow in the reed section standing up next to the EXIT sign, one Dan Levinson, who also happens to be Molly’s husband.  A sweet moment, musically and otherwise:

Posted in "Thanks A Million", Ideal Places, Irreplaceable, Pay Attention!, Swing You Cats!, The Heroes Among Us, The Real Thing, The Things We Love

Mayor Bloomberg might not have noticed, but this week the Australian trumpeter Bob Barnard made Manhattan his own.

Bob and his very charming wife Danielle have been away from home for nearly two months now, with visits to Scotland and England, to Jazz at Chautauqua, touching down for their final fortnight on the East Side.

When I heard from Bob (at Chautauqua) that he was planning to visit some New York jazz spots, I put on my Carpe Diem outfit (it has a lapel button reading I’LL SLEEP NEXT WEEK) and followed him around admiringly.

Bob knows the repertoire masterfully but isn’t offering a series of pre-formulated solos.  Rather, he approaches each chorus as a leap into the unknown: what will this melody and chord sequence have to say to me?  And his improvisations have lovely tumbling phrases, a round glowing tone, an exuberance that elates both audiences and musicians.  I hear Louis and Bobby and Bix, but you’re never in doubt that it’s Mr. Barnard at the helm.

Last Tuesday, September 21, Bob and Danielle came to Club Cache in the Hotel Edison for an evening with Vince Giordano and the Nighthawks.  For most of the night, Bob was enjoying the band: their authenticity, their playfulness, their swing.

Vince invited Bob up for three solo features, one more gratifying than the next.

An amusing irony for a man who’s been traveling for eight weeks, BACK IN YOUR OWN BACKYARD:

And an affectionate (and true) close to the evening, SOMEBODY LOVES ME:

There’s more to come from Bob in New York!

Judging by the frequency by which their signatures appear on eBay’s “Entertainment Memorabilia,” some famous musicians spent as much time signing autographs as they did playing.  Others may have been less well-known or more reticent, so when their autographs appear it’s a pleasant surprise.  (And some eBay sellers label items “rare” in inverse proportion to their value.)

Eddie Durham wanted to be paid for his services, and rightly so, considering what marvels he accomplished with his arrangements for Basie, Glenn Miller, Lunceford, and many others.  Fifteen dollars for a band arrangement now seems a pittance; was this piece of paper actually from the Thirties or was Eddie simply notating, “Hey, you owe me fifteen dollars”?  Research, please: 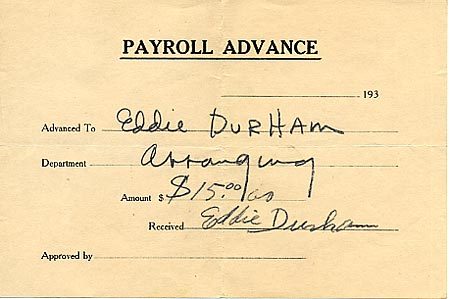 William “Cat” Anderson, for all his blazing high register in the Ellington bands, might have been somewhat insecure: would anyone have mistaken him for an anonymous saxophonist or bassist? 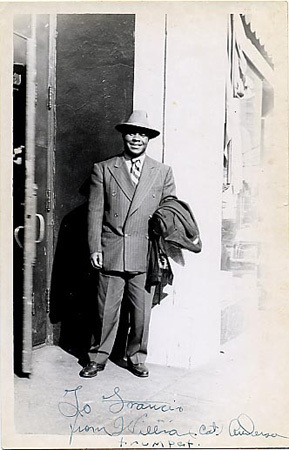 This rare program from Benny Goodman’s 1962 trip to the USSR is something I hadn’t seen (a souvenir of that unhappy experience, according to the bandsmen); this one sports autographs by Mel Lewis and Jimmy Knepper, jazz stalwarts:

And the expected full-page portrait of the King himself:

And what I assume is a program of songs and performers:

And more of Benny, here in caricature:

Posted in "Thanks A Million", Irreplaceable, It's A Mystery, Jazz Titans, Pay Attention!, Swing You Cats!, The Things We Love