Jam sessions don’t always work out.  But the one that took place in the Victory Pub on Saturday, July 10, 2010, during the Whitley Bay International Jazz Festival, succeeded nobly.  And I stopped finding the television screens distracting as soon as the music began.

Perhaps owing to the previous set, the repertoire had a deep Twenties feel.  They began with the Dodds classic, FORTY AND TIGHT.  A prize to the reader(s) who can unravel the etymology of that slang praise.  “Tight,” I can certainly guess at, but “forty” as an accolade?  Research! — while the music is playing, please:

The next song was again associated with Johnny Dodds (and in more recent times, Soprano Summit), OH, DADDY (with or without comma or exclamation point, the meaning is clear):

In memory of Clarence Williams, Alberta Hunter, Sidney Bechet, and Louis Armstrong, someone suggested CAKE WALKING BABIES FROM HOME (although there were no titanic solo duels here — the atmosphere was more friendly than combative):

With Andy Schumm in evidence, there is always the possibility that the Twenties will include that young fellow from Davenport, Iowa, whose shade surfaced most pleasingly for SAN.  How nice that this band knew the verse as well:

And the last song I captured was (and is) a good old good one from the Midwest, full of sweet sentiment, MY GAL SAL (by Paul Dresser, brother of the more celebrated novelist Theodore Dreiser — I prefer Paul’s works to his brother’s, but that’s a purely personal statement — they get to the point more quickly and with greater effectiveness):

The collective ensemble began AT THE JAZZ BAND BALL — which, in retrospect, I regret having missed — but my video-taping arm had begun to quiver and I feared the rest of me would shortly follow suit.  But I hope that these videos suggest some of the delicious enthusiasm and deep artistry that ruled this evening.  Victory indeed!

The original source was a Sotheby’s auction (http://www.sothebys.com/app/live/lot/LotDetail.jsp?lot_id=47TQW) where this and four other latters to the singer Gina Gardner sold for  £1440. 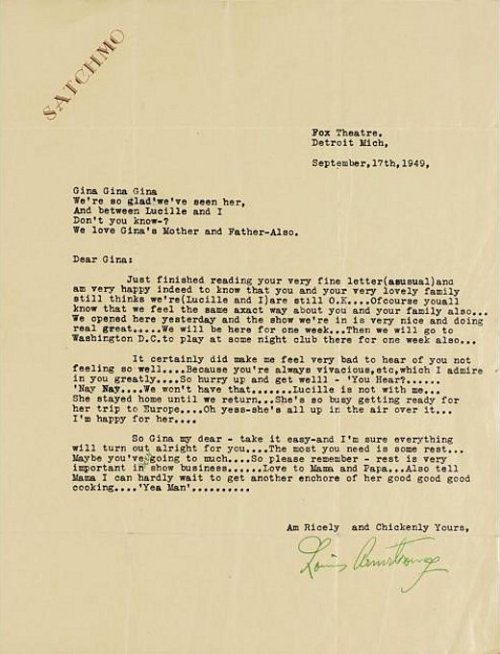 Posted in "Thanks A Million", Irreplaceable, Jazz Titans, Mmmmmmmmmmmmm!, Pay Attention!, Swing You Cats!, The Heroes Among Us, The Real Thing, The Things We Love