With all due respect to these clubs that have provided lasting memories from the early Seventies onward, I can’t over-estimate the joyous resonance of the Sunday night sessions at The Ear Inn (326 Spring Street, Soho, New York City) which have been going on for nearly three and a half years now.

The EarRegulars — co-led by Jon-Erik Kellso, trumpet, and Matt Munisteri, guitar — have offered serene / hot chamber jazz by a quartet staffed by a changing cast of characters . . . with expansion possibilities up to a dozen strolling players.

But Sunday night, December 12, 2010, was a high point: two brass, two rhythm.  That combination might have been challenging with other players, but when the two others were Joel Forbes, bass, and Randy Reinhart, cornet, I knew great jazz was in store.  Joel and Matt are a wonderful team — as soloists and a wasteless, energetic but never noisy rhythm section.  Piano?  Drums?  Not missed.

Jon-Erik and Randy are pals (as you’ll hear) and although an evening featuring two other trumpeters — even though Randy plays cornet — might turn into a competitive display of ferocity, an old-time cutting contest, nothing of the sort happened here.  The two hornmen sounded for all the world like dear friends having a polite but involved conversation.  They soloed without interruption; their contrapuntal lines tumbled and soared; they created great hot ensembles, each one handing off the lead to the other.

How about two tributes to the forever-young man from Davenport,  the dear boy Bix, compositions that have become hot jazz standards, ROYAL GARDEN BLUES and JAZZ ME BLUES?

Written by Earl Hines, performed by Louis and Basie — some solid credentials for the song YOU CAN DEPEND ON ME:

What followed was a highlight of the evening — a deep, rocking exploration of DALLAS BLUES.  They’re on the right track!

Honesty counts, and candor is a great virtue.  So IT’S A SIN TO TELL A LIE, as Fats Waller told us:

Fidelity, even for a short period, is a great thing.  IF I COULD BE WITH YOU (ONE HOUR TONIGHT) is James P. Johnson’s wistful evocation of the desire for more than sixty minutes:

But everything in this life is mutable (root word: “muta”) and so THERE’LL BE SOME CHANGES MADE:

I’m so grateful that such music is being created where I and others can see and hear it! 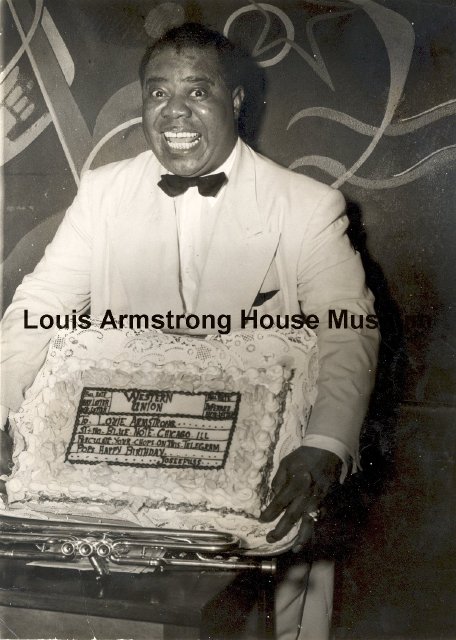 Louis Armstrong was a generous man and artist — and his legacy of generosity continues through the Louis Armstrong House Museum in Corona, Queens, which I visited Wednesday night.

But this isn’t about the house itself, delightful as that shrine is (a combination of modest comfort and lovely trappings): it was about the splendid news that the museum director, Michael Cogswell, laid on us (as Louis would say).

The Louis Armstrong House Museum has launched an online catalog of its vast collections.  It’s the world’s largest archives devoted to a jazz musician available to all on the World Wide Web.

The 24/7 offering can be accessed at the LAHM site — http://www.louisarmstronghouse.org/.  By the end of 2011, the Museum’s entire catalog will be online.  New items will be added every week!

The direct link is http://www.louisarmstronghouse.org/collections/online_catalog.htm.  But don’t take my word for it.  Try it for yourself!

The Museum’s collections encompass more that 5,000 sound recordings, 15,000 photographs, 30 films, 100 scrapbooks, 20 linear feet of letters and papers, and (last but not least) six trumpets.  The essential core of the archives is the Louis Armstrong Collection — Louis’s personal treasures: home-recorded tapes, photographs, scrapbooks, collaged tape-boxes, manuscript band parts, and other delights discovered inside the Corona house after the death of his wife, Lucille, in 1983.

A grant from the Louis Armstrong Educational Foundation made it possible for the Museum to acquire the world’s largest private collection of Armstrong material — the loving life-work of Louis’s friend Jack Bradley, the noted jazz photographer.  Hundreds of candid, never before seen photographs taken or collected by Bradley are a highlight of the collection.  The materials are currently housed in the Benjamin S. Rosenthal Library at Queens College, New York.  And it’s so delightful that the Institute of Museum and Library Sciences offered a two-year grant that made processing the Bradley collection and publishing the Museum’s catalog online.

Noted Armstrong scholar Ricky Riccardi has worked for the past fifteen months documenting, arranging, preserving, and cataloging more than two hundred cubic feet of Armstrong material.  “Working with this collection has been an absolute dream come true, but getting to share it online with other Armstrong lovers from around the world really makes this something special.  And it’s not just for Armstrong experts; the online collection will appeal to music fans, art historians, 20th-century pop culture buffs, musicians, photographers, you name it.  “There’s something for everyone,” says Riccardi.

And that’s no stage joke!

When I went to the LAHM — the Corona house that Louis and Lucille loved so, where they lived for almost thirty years — I captured Michael Cogswell and Ricky Riccardi describing the online catalog, fielding questions from the audience, and playing one of Louis’s private tapes — in honor of the holiday season, one recorded close to Christmas, 1950.  Some of you might find the prospect of so many video clips daunting . . . but at the end of Michael’s explanation, he hands the stage (in a manner of speaking) over to Ricky to play excerpts from that never-before-heard tape . . . a priceless experience.  (In the second clip, the woman who asks about Lucille Armstrong is Phoebe Jacobs, Lucille’s close friend and intimate of many famous jazzmen.)

Just as a postscript: I just about made myself late for work this morning because I couldn’t stop looking at the rare, delightful, hilarious, moving photographs.

Long live Louis!  May he never be forgotten!

And if you would like to skip the videos and read a detailed explanation by the young master of all things Strong, go right to Ricky’s blog: http://dippermouth.blogspot.com/2010/12/louis-armstrong-house-museum-online.html

Posted in "Thanks A Million", Generosities, Ideal Places, Irreplaceable, Jazz Titans, Jazz Worth Reading, Mmmmmmmmmmmmm!, Pay Attention!, Swing You Cats!, The Heroes Among Us, The Real Thing, The Things We Love