First, the picture — from the Bettmann / Corbis archives: the original jazz club Birdland, perhaps on opening night in 1949.  From the left, Max Kaminsky on trumpet, Lester Young on tenor saxophone, a nearly-hidden George Wettling on drums, Hot Lips Page on trumpet, Charlie Parker on alto saxophone, Lennie Tristano on piano.

Had I been there at that front table, I would not have been turning my head away to see what the other people or the photographer happened to be doing, but that matters little now.  (And where are the acetates of this music, broadcast by the Voice of America — this imagined blues performance, especially?) 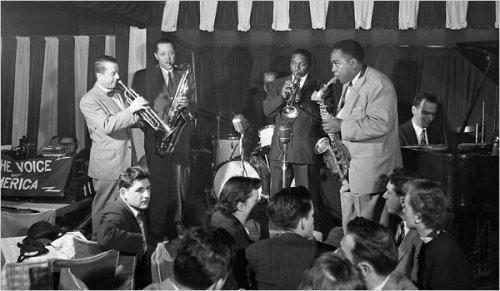 The photograph accompanies an article by Nate Chinen in The New York Times, relevant to my anticipation of tenor saxophonist Ted Brown’s upcoming gig:

Had he enjoyed a different sort of jazz career, you might say that Ted Brown was finally making a comeback. A tenor saxophonist drawn to a light and lyrically swinging style, Mr. Brown turned 83 last month, with just a handful of albums to his name. For the better part of 30 years, from the early 1960s on, he made his living as a computer programmer. “I’m not good at going out and getting gigs,” he said recently, sounding resigned and matter of fact. By his account his last booking in New York as a bandleader was in 1976 at the short-lived Midtown branch of George Wein’s Storyville club.

His next booking is Wednesday night at the Kitano Hotel on Park Avenue, and the circumstances are ripe for his return. Mr. Brown was among the early protégés of Lennie Tristano, a blind pianist and composer who charted his own course through modern postwar jazz before withdrawing into a reclusive life of pedagogy. (He died in 1978.) The music of the Tristano School, as it came to be known, was for many years the province of niche enthusiasts, and only a rare point of reference for musicians in the jazz mainstream.

That’s no longer the case, thanks to the ascendant influence of a generation of players — like the saxophonist Mark Turner, 45, and the guitarist Kurt Rosenwinkel, 40 — who have been vocal in their admiration for Tristano’s harmonically daring, melodically intricate music. Greater availability of that music has furthered the cause, as have scholarly examinations like “Lennie Tristano: His Life in Music” (University of Michigan Press), published in 2007. The Tristano School, always ahead of its time, has come to feel congruent with ours, exerting real influence among younger musicians, including some of the brightest and best.

Mr. Brown, a first-wave initiate with stories to tell, should be of serious interest to them. “I moved from Southern California to New York in September 1948,” he said in a phone conversation, speaking from his home in the Riverdale section of the Bronx. “I had been to New York when I was in the Army in ’46, and heard a lot of music on 52nd Street. I wanted to get back here, and I wanted to find a good teacher.”

Tipped off by an Army acquaintance who had studied with Tristano, Mr. Brown attended a private session and soon became a disciple, joining two other gifted saxophonists: Lee Konitz, who at 83 is among jazz’s great unfaltering elders; and Warne Marsh, who died in 1987. Mr. Brown’s best-circulated recordings were all made with one or the other of these peers.

Tristano was an imposingly dexterous pianist with a commitment to contemporary harmony and the forward-skimming melodic line. Born and raised in Chicago, he moved to New York in 1946, when bebop was ascendant. His music resembled bop in its brisk variations on standard themes, but was less rhythmically volatile and more sternly obsessed with pure improvisation. He took part in the New York scene for a while, earning the respect of some prominent critics and musicians — including Charlie Parker and the pianist Billy Taylor, who died last month — but even then Tristano’s primary focus was on developing musical ideas in a workshop setting.

“Right at the beginning he told me he didn’t want students who were coming in for a few lessons and popping out on the road,” Mr. Brown said. He remained a student for seven years, helping establish a rehearsal studio above an auto shop at 317 East 32nd Street in Manhattan. The address quickly became the title of a Tristano School anthem.

“It’s gotten blown out of proportion,” Mr. Brown said of Tristano’s aloof and imperious reputation. “He was strict, but he also had a very human side.” Yet it’s true that Tristano issued scathing judgments of other musicians, and that he maintained a compulsive control over his music, gradually abandoning live performance for the studio, where he could overdub parts — as on his pioneering, self-titled 1956 Atlantic album — and stamp the output with metronomic precision, often using an actual metronome.

“He was a cult groove weirdo,” said Ethan Iverson, the pianist in the Bad Plus. “I really disapprove of the way he separated his scene from other cats who could play.”

In 2008 Mr. Iverson published a thoughtful essay on his band’s blog, Do the Math, praising Tristano’s singular genius but taking him to task for his social disengagement. In the end, Mr. Iverson wrote, it helps to think of Tristano not as a jazz musician, but rather alongside the player-piano visionary Conlon Nancarrow and the modernist composer Charles Ives, “both experimental American hermits who decided not to play with others.”

Seclusion was one reason for Tristano’s obscurity. Another, more complex, was race. (Mr. Iverson’s essay delves into that issue in detail.) Tristano played with a number of black musicians, but his inner circle was white, as was the perceived affect of his music. “Lennie’s concept was first to get a rhythm section playing very basic, so that what he was doing would be in clear relief,” Mr. Konitz explains in the 2007 book “Lee Konitz: Conversations on the Improviser’s Art” (University of Michigan Press). Given the centrality of dynamic rhythm in jazz, that approach alienated some listeners from Tristano’s music.

“People thought it was cold,” Mr. Turner said. “The African diasporic rhythmic element was not there, not strong enough.” In his own music — notably with Fly, a leaderless trio that will appear at the Jazz Gallery on Tuesday — Mr. Turner set out to make an adjustment. “That’s something that I wanted to do, was bring that into the fold,” he said. “The harmonic information, the melodic information, all of that is so interesting, so why can’t it be brought into a warmer place rhythmically?” (He has a tune called “Lennie Groove.”)

Growing up in Southern California, Mr. Turner discovered Warne Marsh and responded to the style. “It was almost like a no-no,” he said of his interest in the Tristano School. “No one was doing it, no one in the quote-unquote modern mainstream jazz world.” He responded to the articulate force of the music, but it was more than that: “Something about it spoke to my own personal life and upbringing, being a person of African descent brought up primarily in Caucasian neighborhoods. I felt I was going out on a limb, kind of like when I started listening to rock music and new wave and ska.”

Because Mr. Turner is one of the most emulated saxophonists of the last 15 years, especially among music students, the Tristano School has seeped into the consciousness of a new generation of players. Some of his colleagues, similarly revered by the conservatory crowd, have intensified the process. Mr. Rosenwinkel, a longtime band mate of Mr. Turner’s, favors the harmonic involution and long, unfurling lines of the Tristano School. The drummer Jorge Rossy, another Tristano enthusiast, was a decadelong member of the extremely influential Brad Mehldau Trio. And of course there’s Mr. Iverson, who like Mr. Mehldau has played occasionally with Mr. Konitz.

There was a post-bop Tristano School undercurrent well before Mr. Turner and his circle. The critic Stanley Crouch has astutely argued that Wayne Shorter and Herbie Hancock drew from Marsh and Tristano, and there’s at least a whisper of Tristano in Keith Jarrett’s pianism. But widespread acknowledgment of the influence is new. “When I was coming up, I felt like I was really excited about that music and had very few people to share it with,” said Michael Kanan, another contemporary of Mr. Turner’s and the pianist in Mr. Brown’s quartet at the Kitano. “Now I’m encountering more young musicians interested in that music than I’ve ever seen.”

Among the 20-something pianists who have a clear admiration for Tristano is Dan Tepfer. “There are tracks of his that just can’t be ignored,” Mr. Tepfer said. Two years ago he released an album called “Duos With Lee” (Sunnyside), featuring Mr. Konitz. With two saxophonists closer to his own age, Noah Preminger and Dan Voss, he has played gigs around the city featuring nothing but Tristano School music.

Because of obvious precursors, saxophonists may be the chief new inheritors of the style. In addition to Mr. Preminger and Mr. Voss, a noncomprehensive list would include Lena Bloch, Ben Van Gelder, Jeremy Udden and Ben Wendel in New York, and Brad Linde in Washington. (For what it’s worth, all of these musicians are white.)

The streamlined aspects of jazz in the contemporary sphere make for a naturally receptive Tristano moment. “I would say there was a certain ‘straighter’ feel to the way Tristano and his school played eighth notes,” Mr. Wendel, a member of the band Kneebody, wrote in an e-mail message, “and this fits in with how a lot of present-day players approach time.”

For his part Mr. Brown, a profound admirer of Charlie Parker and Lester Young, looks to a more classic mode of interplay. “I always liked the concept of swinging and melody,” he said. One of his best albums, “In Good Company” (Steeplechase), from 1985, features the guitarist Jimmy Raney, the bassist Buster Williams and the drummer Ben Riley: a deeply swinging rhythm team.

What still distinguishes Mr. Brown as a Tristano-ite is the resistance to pattern work and cliché in his solos. “He’s just such a pure improviser,” Mr. Kanan said. “He plays these lovely, beautiful melodies, one after the other, never repeating himself. And never playing in a way where it seems like he’s trying to get attention.”