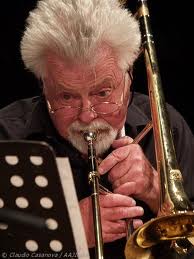 The “avant-garde” trombonist and composer had this to say to Thomas Pena in an October 2008 interview, printed at http://www.jazz.com/features-and-interviews/2008/10/11/in-conversation-with-roswell-rudd

Getting back to the moment when you were inspired to become a musician. . .

When I first heard Louis Armstrong. I went to a private school in upstate New York where most of the kids were New Yorkers who were farmed out to private schools.  They used to bring me down to these clubs and concerts in New York. One day a school buddy took me to hear Louis Armstrong at a movie theater just off Times Square.  At the time Louis performed between films, so I had to sit through the film, The Crimson Pirate, three times to see him again!  It was a commercial thing but Louis radiated so much warmth, creativity and inspiration that I just melted.  I shook his hand and he said some beautiful things to encourage me. I believe it all started with him.

How old were you at the time?

I was probably fifteen.  There was another time in 1948.  The first live jazz band I ever heard was a pick up band from New York City; they were handsome, spectacular guys.  There was James P. Johnson on the piano and a bass player named Pops Foster.  These guys stomped!  I think I was about 12 years old at the time, but it was Louis Armstrong that really compelled me.  After I met him I thought to myself, “I want to do for someone what Louis did for me.”

Note: The Crimson Pirate, starring Burt Lancaster, was playing in New York City in late August 1952 — so Rudd surely saw the All-Stars.  His understanding of the music and growth was phenomenal: perhaps seven years later, Rudd was gigging with an Eddie Condon sextet in Chicago — alongside Pee Wee Russell and Johnny Windhurst, and the broadcasts show him to be a fully-developed player.

Posted in Generosities, Irreplaceable, Jazz Titans, Jazz Worth Reading, Pay Attention!, Swing You Cats!, The Heroes Among Us, The Real Thing, The Things We Love

“YEAH! TAKE ANOTHER!” MARTY GROSZ and the ORPHAN NEWSBOYS, 1997

Videographer and radio broadcaster Don Wolff is my idea of a jazz philanthropist.

After I posted one performance that Don had published (as “MrDonwolff”) on YouTube — by Marty Grosz, Peter Ecklund (cornet), Bobby Gordon (clarinet), and Greg Cohen (bass) —       https://jazzlives.wordpress.com/2011/01/10/characteristically-marty-grosz-the-orphan-newsboys-1997/ — I asked Don if there were any more at home like that.  There were and there are.

This set came from the 1997 Mid-America Jazz Festival, and it finds the quartet in wonderful form.  The rhythm pulse is something to marvel at, thanks to the fine teamwork of Marty and Greg; the horns are splendidly lyrical and hot.  And Marty’s inimitable commentaries are here preserved for future cultural historians.

Bobby Gordon wears his emotions proudly — no more openly than in a ballad performance such as IT’S THE TALK OF THE TOWN, that Thirties narrative of heartbreak and hoped-for reconcilliation.  Who needs more than two choruses?:

DON’T BE THAT WAY is such a pretty song when removed from big-band performance ritual (there’s a touching version from 1938 — one of John Hammond’s many fine ideas — featuring Lester Young and Buck Clayton, approaching this song as a sweet rhythm ballad).  Here, Peter’s pastoral whistling sets the mood instantly, leading to a gentle vocal.  The often acidic Mr. Grosz is — to my ears — a peerless singer of love songs at this tempo and even out-and-out ballads, and he outdoes himself here.  Peter suggests 1928 Bix at points, and Bobby, in his inimitable tender wanderings, evokes and outdoes his mentor Joe Marsala before the eloquent Greg Cohen has his say before Marty (imploring his favorite “fat mama” to be gentle) leads into a fade-out with a surprise:

And to close — a paean to romance of a different kind, EVERYBODY LOVES MY BABY, where Peter growls the message to us through that archaic but useful jazz fashion accessory, the metal derby, before Bobby takes a more tender approach to his amorous declarations, before Marty and Greg show us why rhythm was born.

This performance, by the way, is the source of my title — a Grosz exhortation from the old days:

As I write this, Don is getting ready to record more of Marty and his esteemed friends at the 2011 Arbors International Jazz Party in Florida — I can’t wait!

STUDY: LOVE MUSIC?  THANK A SUBSTANCE IN YOUR BRAIN

NEW YORK — Whether it’s the Beatles or Beethoven, people like music for the same reason they like eating or having sex: It makes the brain release a chemical that gives pleasure, a new study says.

The brain substance is involved both in anticipating a particularly thrilling musical moment and in feeling the rush from it, researchers found.

Previous work already had suggested a role for dopamine, a substance brain cells release to communicate with each other.  But the new work, which scanned people’s brains as they listened to music, shows it happening directly.

While dopamine normally helps us feel the pleasure of eating or having sex, it also helps produce euphoria from illegal drugs.  It’s active in particular circuits of the brain.

The tie to dopamine helps explain why music is so widely popular across cultures, Robert Zatorre and Valorie Salimpoor of McGill University in Montreal write in an article posted online Sunday by the journal Nature Neuroscience.

The study used only instrumental music, showing that voices aren’t necessary to produce the dopamine response, Salimpoor said.  It will take further work to study how voices might contribute to the effect, she said.

The researchers described brain-scanning experiments with eight volunteers who were chosen because they reliably felt chills from particular moments in some favorite pieces of music.  That characteristic let the experimenters study how the brain handles both anticipation and arrival of a musical rush.

PET scans showed brains pumped out more dopamine in a region called the striatum when listening to favorite pieces of music than when hearing other pieces.  Functional MRI scans showed where and when those releases happened.

Dopamine surged in one part of the striatum during the 15 seconds leading up to a thrilling moment, and a different part when that musical highlight finally arrived.

Put another disc in the player and let me feel those chills!   That must be why we call it HOT JAZZ . . .

Posted in It's A Mystery, Jazz Worth Reading, Pay Attention!, Swing You Cats!, The Real Thing, The Things We Love