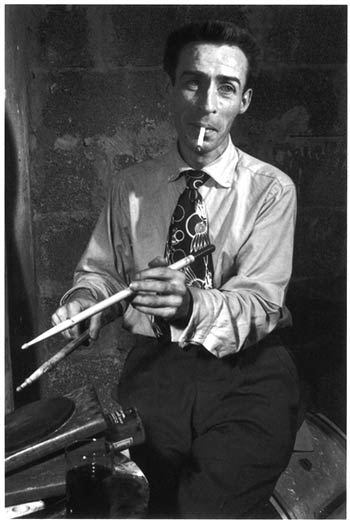 Being alive is cause for celebration.

And being someplace where beauty is being created is even more reason to feel joy.  Last Sunday, June 19, 2011, was a happy time at The Famous Ear (The Ear Inn, 326 Spring Street, Soho, New York City) for many reasons.  The EarRegulars knew it was Father’s Day and played one song — you’ll hear it here — to celebrate our Papas (whimsically, mind you).

The EarRegulars that night were co-founders Matt Munisteri (guitar); Jon-Erik Kellso (trumpet); Pete Martinez (clarinet); Jon Burr (bass) — with a visit from Andy Stein, often playing his violin with Vince Giordano’s Nighthawks, but here toting his tenor saxophone for the first set (a surprise!) and his baritone for the second.

The EarRegulars are not a group of antiquarians, “playing old records live.”  Nay, nay.  But they do honor their creative parents all the time: their jazz Dads and Moms — with great love, in the best way . . . by making something new and fresh and striking out of their own experiences.  Every Sunday at The Famous Ear is a kind of spiritual Father’s Day, because Louis and Bix, Roy and Ruby, Eddie and Django, and a hundred others are remembered and cherished in the solos, the ensembles, the tempos, the swing.

And there was another reason to celebrate: the EarRegulars marked a run of steady gigs — four years of glorious Sunday evening sessions — that June 19.  Was it their fourth birthday or their fourth anniversary?  I can’t tell (someone will surely write in to explain which it was) but it was a sweet occasion, especially in a world where a “steady gig” is usually measured in shorter timespans.

Here are some soul-uplifting performances from that night:

A lilting, sweet SLEEPY TIME GAL that had the pleasure of staying at home with the Beloved in every note:

For Jimmie Noone and all the jam sessions that followed him, a profoundly swinging statement of mutual knowledge, I KNOW THAT YOU KNOW:

From that certainty, a troubling question: HOW COME YOU DO ME LIKE YOU DO?

And a cheerful THREE LITTLE WORDS:

Then (a request from JAZZ LIVES), that romantic entreaty — LET ME CALL YOU SWEETHEART:

A groovy I COVER THE WATERFRONT, suggesting that the waterfront in question was Danish, circa 1933:

For Fathers everywhere (or forefathers?): I’M A DING DONG DADDY FROM DUMAS, with an utterly unexpected vocal chorus by Herr Stein:

Jon Burr, brave explorer, led everyone into a deep IT HAD TO BE YOU:

And there was HAPPY BIRTHDAY (TO US)* — but since that song is only eight bars long, which is rather like a soliloquy of ten words, Matt led the EarRegulars into adding an I GOT RHTYHM bridge, for variety — I thought of Lester Young’s BLUE LESTER, but there was nothing seriously historical in the air, just jubilation, well-deserved:

May the EarRegulars and The Famous Ear prosper and continue to spread joy!

*I called this version on YouTube LET’S GET HAPPY, in honor of the 1938 Commodore recording featuring Bobby Hackett and Leo Watson, a stunning combination.

Posted in "Thanks A Million", Generosities, Ideal Places, Irreplaceable, Jazz Titans, Pay Attention!, Swing You Cats!, The Heroes Among Us, The Real Thing, The Things We Love, Wow!