As a young jazz fan, I acquired as many records as I could by musicians and singers I admired.  (There was an Earl Hines phase, a Tatum infatuation, a Ben Webster obsession among many.)  The impulse is still there, but economics, space, and selectivity have tempered it somewhat.  I’ve written elsewhere about Wanting and Having and Enjoying, and those states of being are in precarious balance.

But these philosophical considerations don’t stop me from being excited at the thought of visiting Hudson, New York, once again — and my favorite antique store, “Carousel,” on Warren Street.

Carousel was once a “National Shoe Store,” as it says on the floor in the entrance way, and it specializes in a variety of intriguing goods — furniture, books, planters, metalwork . . . but in the very back of the store, past the cash register most often supervised by the exceedingly pleasant Dan, is a galaxy of records.  I skip the 45s and go to the stacks of 10″ 78s, the browsers full of 12″ lps and one devoted solely to 10″ lps (where one might find THE DINAH SHORE TV SHOW and BRAD GOWANS’ NEW YORK NINE).

Here’s what I found — and purchased — one day last week. 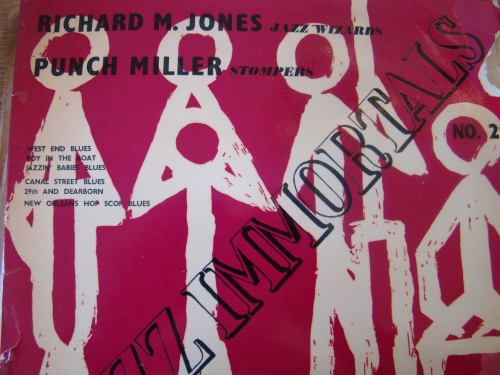 Richard M. Jones was a pianist and composer who accompanied blues singers, led a few dates in the Twenties . . . and this one in 1944.  The rarity of this 10″ French Vogue vinyl reissue is evident.  The original tracks (four by Jones, two by the ebullient trumpeter Punch Miller) were recorded in Chicago for the Session label — 12″ 78s — with a band including the under-recorded Bob Shoffner, wonderfully boisterous trombonist Preston Jackson, and the heroic Baby Dodds.  I’d seen these sides listed in discographies for years, and the Sessions appeared on a vinyl issue on the Gannet label (with alternate takes!) but I’ve never heard them . . . and any version of NEW ORLEANS HOP SCOP BLUES is all right with me.  I haven’t heard the music yet, but have high hopes.

Decca and Brunswick collected four-tune recording sessions as GEMS OF JAZZ and the more pugnacious BATTLE OF JAZZ.  Zutty didn’t record many times as a leader, and this is one of the rarer sessions: 1936, I think, with hot Chicagoans who didn’t reach great fame.  I had these four sides (once upon a time) on sunburst Deccas . . . gone now, so I anticipate hot music here.

(The shadow above speaks to the haste of JAZZ LIVES’ official photographer.)

The four sides above have often been reissued, although the most recent Tatum Decca CD split them between Tatum and Big Joe Turner.  No matter: they are imperishable, not only for Big Joe, in pearly form, but for the pairing of Joe Thomas and Ed Hall, saints and scholars.

Now for two rare 78s: their music reissued on European vinyl and CD, but how often do the original discs surface?

Whoever Herman was, he had good taste.  The WAX label was the brainchild of solid reliable string bassist Al Hall in 1946-7: its output might have been twenty sides (including a piano recital by Jimmy Jones) using the best musicians one could find in New York or the world.  Herman bought the first issue!

That quintet wasn’t made up of stars — except for Ben — but they were all splendid creative improvisers.

I believe these 78s were made especially for purchase at the club — and Eddie Condon might have been under exclusive contract with Decca at the time (on other sides, I recall the guitarist as being the much more elusive Fred Sharp).  I recently looked up Joe Grauso in John Chilton’s WHO’S WHO IN JAZZ and was saddened to find that he had died in 1952, which is why we have so little of him aside from the Commodores and the Town Hall Concert broadcasts.

I love the composer credit.  Makes perfect sense, doesn’t it?