eBay continues to amaze.  Any comments from the hot cognoscenti?

Posted in HELP!, Irreplaceable, It's A Mystery, Jazz Worth Reading, Swing You Cats!

I can hear it now. 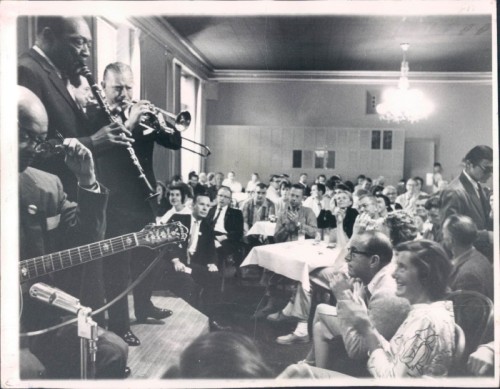 Do you think it’s AS LONG AS I LIVE or perhaps THAT DA DA STRAIN?  It sounds good from where I am in 2011.

Drummer Vince Bartels knows how to put together assertively swinging groups, and this one — at the 2011 Sacramento Jazz Jubilee — was no exception.  The session began with pianist Johnny Varro, bassist Jennifer Leitham, saxophonist Pete Christlieb, and trombonist John Allred — playing SOFTLY, AS IN A MORNING SUNRISE exuberantly rather than tentatively crepuscular:

LIMEHOUSE BLUES began as a slow drag then romped:

Before the fire marshals were called in, Pete offered the pretty CLOSE ENOUGH FOR LOVE:

and Vince (a proud grandfather) gave twelve-year old Mackenzie Rose Sullivan her chance in the spotlight for ALL OF ME:

The PLUS became apparent when vibraphonist John Cocuzzi joined the group for a rocking TOPSY:

Another delicate interlude — THE NEARNESS OF YOU — featured Cocuzzi, Varro, and Leitham:

And John stayed around for a frankly dangerous CHEROKEE:

Posted in "Thanks A Million", Ideal Places, Pay Attention!, Swing You Cats!, The Heroes Among Us, The Real Thing, Wow!