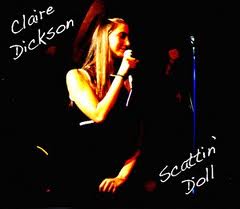 I had never heard of Claire Dickson, but she can sing.  She’s got IT, however you define that pronoun, proven throughout her new CD.

Claire has a bright, clear voice; her phrasing is simple but easy, flexible.  The improvisatory chances she takes work.  Her scatting doesn’t grate on the nerves, and although she has listened closely to Ella, she inhabits the great Fitzgerald mansion with ease, making it her own.

Claire doesn’t go for the dark depths of GLOOMY SUNDAY, so the world-weariness of BLACK COFFEE is slightly beyond her, but that only suggests a more sunny world-view.  I am suspicious of contemporary pop songs brought into a jazz context, but her PHANTOM DOLL is convincing throughout.  Her arching MY MAN’S GONE NOW, a song I would have thought too dark for her, is quite touching: rather than aiming for dark majesties, she sings with a clear, simple intensity.

Hear for yourself.  On Claire’s MySpace page, she swings through CONFIRMATION, LOVE ME OR LEAVE ME, IF I WERE A BELL, and MIDNIGHT SUN.

Now for the surprise: wanting to know more of Dickson, I went online and found that she had recorded these two sessions on SCATTIN’ DOLL when she was twelve and thirteen years old. There is no sense of a precocious moppet singing grownup songs here!  I think that she is a young woman with a startling talent. 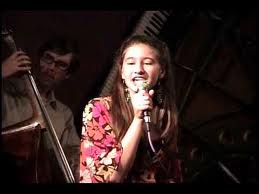 To a New Yorker like myself, “Burbank, California,” summons up memories of Luther Burbank and his hybridizing of fruits and vegetables, and (on another, less serious level) the jokes Dan Rowan and Dick Martin used to make about the city on LAUGH-IN, so many years ago.

But it’s possible that Burbank may go down in local jazz history as the place where Hal Smith’s FOUR DEVILS AND AN ANGEL had their first gig.  (The band was really THREE DEVILS, but all that can be clarified.)  JAZZ LIVES readers will remember that one of our roving correspondents, Henry Maldon, went to Joe’s in Burbank on August 15 and came back with a glowing report about the music he had heard.

No surprise there, considering that the band was Hal on drums, Katie Cavera on bass and vocals, Albert Alva on tenor sax, and Chris Dawson on piano.  (You can guess who the ANGEL is, although the three other men on the stand aren’t exactly on the Satanic payroll.)  The fourth DEVIL came along in the person of guitarist / vocalist Dave Stuckey, who also made these informal videos of the band at work.

On ROSETTA, the mood is definitely Keynote — a Basie feel with hints of Red Allen on THE SOUND OF JAZZ, 1957.  You forget immediately that Chris is playing a keyboard, and although Hal isn’t well-captured by the camera microphone, he’s felt even when not heard.  And the rest of the band rocks along in a delightfully easeful way:

And here’s a sweetly swinging version of CHERRY, where Chris reminds us of his beautiful sensitivity to the groove, his Wilsonian subtleties:

The glories of Fifty-Second Street, way out West . . .