I was eager to hear this band at the 2011 Sweet and Hot Music Festival in Los Angeles.  I always admire the playing of  Clint Baker (here on trombone), and pianist Chris Dawson is one of my heroes.

The leader, clarinetist Tim Laughlin, I knew as an articulate student of Pete Fountain, and Connie Jones had impressed me for his partnership with the late Richard Sudhalter (they made a superb Stomp Off recording that eventually appeared on CD as CONNIE JONES AND DICK SUDHALTER: GET OUT AND GET UNDER THE MOON, CHR 70054).  In addition, Connie was chosen by Jack Teagarden, which says a great deal about his talent.  The Sweet and Hot ensemble was filled out with a variety of bassists and drummers; in this case Richard Simon (b) and Dick Shanahan (d).

But I wasn’t prepared for what I heard.  Laughlin reminded me of the much-missed Irving Fazola — that’s a great compliment — with his deep singing tone, his ability to turn corners without strain, his lovely phrasing (never a note too many), and his fine cheerful leadership, which translates to pretty, not-often-played songs at just-right tempos.

Connie was simply amazing: constructing Bobby Hackett-cloud castles with harmonies that were deep (beyond the formulaic) without calling attention to themselves, his tone glowing but with the occasional rough edge when appropriate; his approach to the instrument a seamless blending of singer, brass tubing, and song.

Like Bob Barnard, Connie plays in a manner both casual and architectural: his solos combine solidity and airiness.  Although his tone has a sweetly human fragility, Connie always seems to know where he’s going, but nothing is ever mannered or predictable; his twists and turns surprise the musicians who stand alongside him.  I thought I heard echoes of Doc Cheatham’s lighter-than-air flights, but Connie obviously has all of this on his own — with a solid foundation of Louis.

Chris Dawson can make you think of Hines, of Wilson, of Waller or James P., but he never sounds derivative; his playing is so organic, his approach so easy, that he makes a four-bar introduction seem like a complete work of art.  What Chris does is hard work, but a Dawson solo is a piece of sleight-of-hand: it sounds easy, nonchalant.  And he makes subtle magic carpets out of his accompaniments without ever stealing the limelight from the soloist.  Like Jess Stacy in the Goodman band, you can’t help but listen to what he’s creating.

These three players constructed shimmering solos and neat ensemble parts — but a true New Orleans band needs some spice, some grit and funk — provided admirably by Clint on trombone, his tone huge, his phrases and exuberant attack suggesting a meeting at the bar of Higginbotham, Sandy Williams, and Dicky Wells.

Of Simon and Shanahan, I will reach back to the Sage, Albert Edwin Condon, and say that they did no one any harm.

Here are some shining moments from the first set I captured — on September 2, 2011.

I MAY BE WRONG is a 1934 classic (no one believed me when — at some point during the festival — I explained that the “speaker” in the song is blind . . . as I recall, which makes the lyrics understandable.  Research?) that usually leads to an easy glide, as it did here:

I’M SORRY I MADE YOU CRY (who says that men don’t apologize?) was a favorite of Jack Teagarden and remains one of Jon-Erik Kellso’s:

IT’S WONDERFUL, by Stuff Smith and Mitchell Parish, was first recorded by Louis and by Maxine Sullivan — but the version that most listeners know by heart comes from the Teagarden-Hackett COAST CONCERT (or COAST TO COAST) on Capitol, a treasure:

After such beauty, how about a little street music: if BEALE STREET could talk, it would sound like this:

Tim chose that old barbershop quartet favorite DOWN BY THE OLD MILL STREAM as his feature, and played it beautifully:

Clint looked surprised when the magic pointer came to him, and (after apologizing, needlessly) swashbuckled his way — playing and singing — through the eternal quesion, WHAT IS THIS THING CALLED LOVE? — his version owing more to Bubber Miley than to the Ritz-Carlton:

Another “wonderful tune,” the Gershwins’ S’WONDERFUL:

And the band reassembled for an unusual choice to close the set (rather than a stomp or a drum feature), WRAP YOUR TROUBLES IN DREAMS:

This band is happily distant from formulaic “Dixieland,” “New Orleans,” or “trad.”  They create beautiful melodies, they swing, and they listen to one another; the result is moving music. 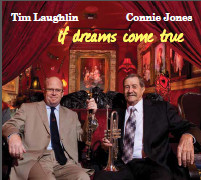 P.S.  Last year, Tim’s band, with Connie and pianist John Sheridan, made a rewarding CD, just out.  Visit http://www.timlaughlin.com/music.htm for information (there’s also a documentary DVD about the making of the music): I recommend both!