TAKING RISKS, HAVING A BALL: TWO CINEMATIC MASTERPIECES from “THE SOUND OF JAZZ” (1957)

Next to JAMMIN’ THE BLUES and HOT HOUSE, the 1933 footage of Louis in Copenhagen, Duke in CHECK AND DOUBLE CHECK, the silent newsreel film of the Randall’s Island Carnival of Swing, the 1957 THE SOUND OF JAZZ might be the most famous film of jazz performance extant.  I’ve seen it in various forms: on a muzzy VCR copy, an improved DVD, and in bits and pieces on YouTube.

And I hope everyone has seen it so many times that it has the gleam of photographs of a dear old friend — lovingly glimpsed from many angles in a leisurely way.

But when the generous collector Franz Hoffmann opened his Henry “Red” Allen box of wonders, I thought, “What if there are some people who haven’t seen ROSETTA and WILD MAN BLUES — ever?”  So in the same way we return to stand awestruck in front of a Sargent portrait or we settle in for a long night with KING LEAR, let us return to these two magical filmed performances.

Let us be frank about this band.  It was a gathering of strong personalities — players who demanded space for themselves (perhaps with the exception of Pierce and Barker) who — given the wrong audience, could caricature themselves.  To some this will seem like heresy, but the evidence exists.  But what remains here is an exuberant jostling in the name of the music:  the combat between Red and Rex is subtle and sly, and Jo’s solo — although perhaps a digression — is constrained rather than a show-stopper.

Careful observers will note that in a program ostensibly devoted to the blues, neither ROSETTA nor WILD MAN BLUES is one, although the latter descends into those emotional depths with great fervor.

So one could watch these clips over and over, marveling at the balance between individual ego and cohesion.  What Red Allen does is also an advanced course in leadership.  I know that the band had had a “rehearsal” for the purposes of recording the music for Columbia Records (more about that later) but it’s clear that not much had been worked out aside from the basics: who solos first and for how long.

But I would propose another reason to marvel at these clips, and it’s a silent one — almost in the name of moving sculptures and shadows.  The director of the program, Jack Smight, was a great jazzman himself — not that he played an instrument, but in the chances he took.  This was live television, so his decisions were made on the spot and there were no retakes.  He had five cameramen — their names Bob Heller, Harold Classen, Joe Sokota, Jack Brown, and Marty Tuck.  And Smight moved from one to the other with great logic, sensitivity, and freedom.  Musicians hard at work — in love with their art — are great studies, and these five cameras captured not only the usual visual cliches: the sweating face, distended cheeks, intake and outflow of breath, but the musicians listening and responding to one another.  And to their own creations: one of the most memorable seconds of this is the expression on Rex Stewart’s face after he has pulled off what he understands is a particularly felicitous epigram in WILD MAN BLUES.  It’s self-congratulatory but in a sweetly hilarious way, “Hey, Ma!  Look what I just played!”  And who would deny Rex his pleasure in his own art?

In an era where multiple-camera setups often lead to restlessness that is difficult to endure (even before everyone had a video camera) these cuts and chance-takings are both beautiful and highly rewarding.  I propose something nearly audacious: one could watch these films with the sound off and marvel at the faces and their expressions.  Truly rewarding film of a musical performance is not only the soundtrack, but the way the players present themselves to us, as we see here. 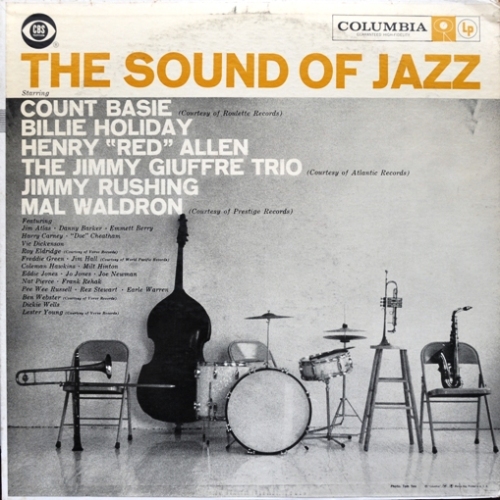 And a purely aural note.  In the vinyl era, both a monaural and a stereo record were issued.  They captured the music at the “rehearsal,” December 5, 1957.  (I assume that this session also captured the disembodied voices we hear on the television program, explaining what the blues meant to them.)  Both of those issues were slightly different: at one point in the last minutes of DICKIE’S DREAM, the brass and reeds got out of synch with one another; on one issue, the raggedness is documented (very reassuring for those of us who are not giants on the scale of these players!); on the other, a neater passage and a different Basie piano bridge have been spliced in.  George Avakian was apparently not involved with this project, but Irving Townsend seems to have picked up some of George’s skill with a razor blade.  But — even better! — the CD issue, now possibly difficult to find (Columbia Legacy CK 66082) includes a previously unissued take of WILD MAN BLUES that runs almost nine minutes.  (Much harder to find is the late Bob Hilbert’s vinyl issue on his own Pumpkin label, THE “REAL” SOUND OF JAZZ, which presents the audio from the television show.)

Even if you think you know these performances, I will wager whatever you like that something will come and surprise you in a repeat viewing.  Bless these musicians; bless Whitney Balliett and Nat Hentoff; bless Smight and his cameramen; bless Franz Hoffmann, too.

2 responses to “TAKING RISKS, HAVING A BALL: TWO CINEMATIC MASTERPIECES from “THE SOUND OF JAZZ” (1957)”