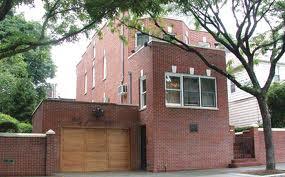 This past Monday I spent yet another pleasant afternoon at the Louis Armstrong House Museum in Corona, Queens.  The house is closed on Mondays, but it was a special occasion.  I was there to train as a volunteer docent, someone who would give guided tours of the house.  Being a volunteer in service to Louis Armstrong is the fulfillment of a lifelong dream for me, because I could never repay my debt to the man who has given me so much, not only his music but his attitude towards life*.

The LAHM needs volunteers, but they are precise in their requirements: there’s an application form to fill out, an interview (pleasant but serious), references to provide, and several training sessions.  The prospective volunteer is asked to make a six-month commitment and offer her / his services to the LAHM for one day a week, 10-5. You can fill out the application online: thatsforme.   Serious stuff, but they don’t let just anyone take care of holy places.

Yet it is absolutely uplifting to be allowed into Louis and Lucille’s house, to climb the stairs that they climbed, to see the mirrored bathroom and the dining room — with an Asian painting on the wall whose pictographs, translated, are PARADISE ON EARTH.

The extraordinarily shiny mid-century turquoise kitchen; the shiny mylar wallpaper (Lucille dug wallpaper and the insides of the closets are wallpapered in different patterns); the exhibit room with Louis’ gold-plated trumpet; the den where Louis spent much of his time listening to music, making his tape-recordings, talking on the telephone, practicing his trumpet, singing his songs.  A portrait of Louis by Calvin Bailey; another by some Italian fellow.

One of the most touching aspects of a visit to the LAHM is the soundscape.  (How could you have a tour of Louis’ world in silence?  Impossible.)  Moving from room to room, one hears excerpts from Louis’ homemade tape-recordings.  Early on, Louis was thrilled by getting it all down “for posterity.”  He knew his worth, and without immodesty, he knew that we would be listening to his life after he and Lucille were gone.

I heard, once again, the sweet story of how, when Louis and Lucille were newly married in 1942, she wearied quickly of “the road,” of living out of suitcases, and decided that the new couple should have a home.  She knew of a house in Corona, Queens, for sale — even then a comfortable blue-collar neighborhood, but one in which African-Americans were welcome  — and purchased it without Louis having seen it.  He was on the road perhaps 300 nights a year.

When he was going to be in New York, Lucille told him about the house and gave him the address.  Very early one morning in 1943, Louis caught a cab and had the driver take him to an 34-56 107th Street in Corona, Queens.

Because he hadn’t seen any photographs of the house and it seemed extremely grand to him, he asked the driver to wait there, in case there was some mistake.  He climbed the steps that I climbed on Monday, rang the doorbell, and there stood Lucille, in her dressing gown, as pretty as a woman could be, saying the words every man or woman longs to hear, “Welcome home, honey.”

Louis couldn’t believe this was his home at first, but he was convinced.  And he lived in this house with his wife until his death in 1971.

I write all this with a lump in my throat — for gladness, because Louis is my hero.  I told Michael Cogswell this (because I had the same feelings while in the House), “Louis is my saint and we try to be his apostles.”

You may not want to be a docent at the House — that’s fine.   Some of my readers will find the commute to Corona a bit taxing.  But if the idea appeals to you, click wonderfulworld.

But I encourage you to visit the Louis Armstrong House Museum and be in the spiritual presence of the man who changed and created so much of the music we love.  You might want to absorb the aura of his great humanity, his generosity, his love for the music and his fellow men and women (including miniature Schnauzers).  Or you might want to come and look at the wallpapers!  (Lucille loved wallpaper and the house is a marvelous specimen of the best mid-century modern American interior decor, and that’s no stage joke.)  Here’s the information you’ll need about the forty-minute tours:  louis.

The LAHM also needs your financial support . . . but you don’t need me to tell you this.  Become a member or make a contribution:  swisskriss.  These days, everyone’s bucket has a hole in it, but holes can be patched.

Just to get you in the mood, here is Louis performing that pretty song, HOME.

Louis and Lucille Armstrong loved their neighbors — the neighborhood kids ate ice-cream in the living room and watched Westerns on television.  If they were alive today, they would be inviting friends to the house for good times.

The House itself welcomes you.  Within its tidy rooms Louis and Lucille are alive.

Make a date with yourself and your Beloved to pay them a call in the most down-to-earth shrine you will ever visit.

*And here’s what I mean by Louis’ attitude toward life — I wrote about it some time ago: what-would-louis-do.