CATHERINE RUSSELL WELCOMES US IN! 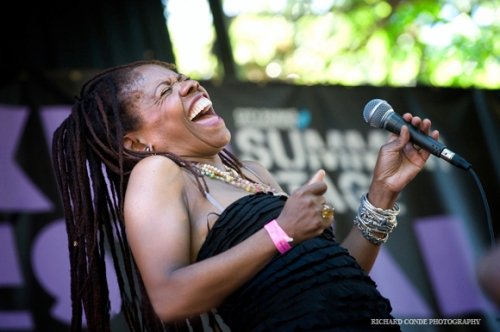 The Beloved and I were in the presence of magic at the Allen Room (Jazz at Lincoln Center) last night when singer Catherine Russell welcomed us in.

I don’t mean that she just began her show by saying, “I’m glad you are all here,” as artists usually tell an audience.

But from the first phrase of her opening song, I’M SHOOTING HIGH, she turned the Allen Room into something warm, making us feel both as if we were in her own magically cozy space.  Although she was stylishly dressed, in front of a ten-piece band, with the great New York street scene viewed from above, none of this distracted her from her great purpose: to lift us up through sweet swinging music.

She is such an expert performer that she made her art — clearly the result of great attention to detail — seem natural and intuitive, as if she and the band had just gotten together to have a good time.

Her delight in being with us was genuine.  When a couple, arriving late, made their way to their seats down front, Catherine beamed at them and said the most encouraging thing, “Welcome, welcome!” — and we relaxed even more, knowing that she meant it.

What she was welcoming us to was a musical evening of the most gratifying kind.  It was inspired by Louis Armstrong, for one, always a good start.  Most of the songs she and the band offered were connected to Louis, but she remained herself: no growl, no handkerchief, no mugging.  Rather she understood and demonstrated what Louis was all about — deep romance, great fun, rocking rhythm, daring improvisations.  Love, whether eager celebration or brokenhearted lament — was her theme.  And there was another man inspiring her performance: Louis’ friend, pianist, and musical director for many years: Luis Russell, who (by the way) happened to be Catherine’s father.  Pops and Daddy, if you will.

She drew most of her material from the great period of the Louis / Luis collaboration — 1935-42, the songs now collected on the great Louis Mosaic box set, so we got to exult with her for I’M SHOOTING HIGH (“Got my eye / On a star / In the sky”), dream along with I’M IN THE MOOD FOR LOVE, swing out on I CAN’T GIVE YOU ANYTHING BUT LOVE, mourn to I COVER THE WATERFRONT, laugh out loud to PUBLIC MELODY NUMBER ONE.  Catherine’s vision of Louis reached back to the Twenties for STRUTTIN’ WITH SOME BARBECUE, SUGAR FOOT STRUT (now, finally, I know what the lyrics are talking about!), and a romping EVERYBODY LOVES MY BABY.

And it expanded to include BACK O’TOWN BLUES and LUCILLE, songs with which she had a very personal connection.  The first of those two — written by Louis and Luis — was the flip side of Louis’ 1956 hit, MACK THE KNIFE.  For some, that fact would be only a jazz-fiend’s winning Trivial Pursuit answer.  But for Catherine it was so much more.  The royalties from BACK O’TOWN BLUES enabled her parents, Luis and Carline Ray (Catherine’s mother had been in the audience for the first show) to purchase their first new car — a two-tone blue 1956 Mercury.  Even from row N, the Beloved and I could see how much that car had meant to the Russells from Catherine’s very warm retelling of the story.  And the very touching LUCILLE had been written by Luis in 1961 for Louis to try — a loving tribute to Lucille Wilson Armstrong . . . and, not incidentally, a beautiful song, now fully realized by Catherine.

She also showed her great emotional range in a dark reading of NO MORE, a sultry evocation of ROMANCE IN THE DARK, a hilarious I’M CHECKIN’ OUT, GOOM-BYE (evoking Abbey Lincoln, Lil Green, and Ivie Anderson, respectively).

Catherine is also an astonishing singer, if you haven’t guessed by now.  She has a perfectly placed voice, with power and depth but a kind of reedy intensity (she can sound like an alto saxophone but more often she reminded me of a whole reed section coming out of her long lithe frame).  Her sound is sweet yet pungent.  She has great dramatic intensity but she never seems as if she’s “acting.”  From somewhere inside the song, she lights the way, matching her readings of lyrics and melody exactly to the emotions . . . making familiar songs feel roomy and new.  And rhythm bubbles up through her — she was always in motion, rollicking around the stage, expertly dancing, embodying joy in person.

And the band was just as delightful: let me write their names here again to celebrate them: Matt Munisteri, Mark Shane, Lee Hudson, Mark McLean, Jon-Erik Kellso, Dave Brown, John Allred, Scott Robinson, Andy Farber, Dan Block.  New York’s finest!  Each one of them had something deliciously incisive to bring, from McLean’s saucepan-percussion reminding us of Zutty Singleton on SUGAR FOOT STRUT, Allred’s plunger-dialogue on GOOM-BYE, Scott Robinson’s soprano taragota on NEW CALL OF THE FREAKS (a whole surrealistic play in itself, with the horn section picking up their paper parts to read the unforgettable Dada poetry: “Stick out your can / here comes the garbage man. . . . “).  Kellso, once again, became the Upper West Side Louis, and Matt swung us into bliss — to say nothing of the eloquent gents of the sax section, Mister Brown to You, the reliable Hudson keeping it all together, Mark Shane pointing the way — Jess Stacy to Catherine’s Helen Ward.  The brilliant arrangements by Matt, Jon-Erik, and Andy gave us a rocking big band distilled to its essence.

The Beloved and I enjoyed every note.  We would be there tonight if we could.  If you can, stop reading this post right now and get a pair (or more) of tickets for the Saturday night shows — 7:30 or 9:30.  Or if that’s not possible, do what I did and buy Catherine’s latest CD, STRICTLY ROMANCIN’ — it has some of the same songs and almost the same band.

Miss Russell will welcome you in, too!

Posted in "Thanks A Million", Bliss!, Generosities, Hotter Than That, Ideal Places, Irreplaceable, Jazz Titans, Mmmmmmmmmmmmm!, Pay Attention!, Swing You Cats!, The Heroes Among Us, The Real Thing, The Things We Love, Wow!