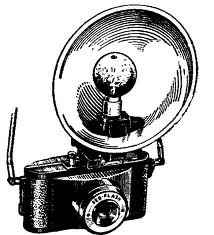 I’m writing this post on behalf of a musician I respect — let’s call him Theodosius — who came to me at a jazz party with a reasonable request.

“Michael, could you spread the word in JAZZ LIVES — whose readers love the music and the musicians — that flash photography is very hard on us?  I’m in the middle of a solo, trying to make something beautiful and swinging, and a fan — no doubt a nice man or woman — sticks a camera or an iPhone in my face and the flash goes off and nearly blinds me for the next sixteen bars.  I know these folks only want an on-the-spot photo of someone they admire to take home, but it’s hard having explosions of light in our faces.”

I would be the last person to discourage people from taking photographs of our heroes . . . but Theodosius has a point.  In the most kind-hearted enthusiastic ways, people are sweetly oblivious of the havoc they create with their cameras.  I’ve seen fans who want to get close to the band stand up in front of large audience and push cameras into the band as it’s performing . . . distracting to the audience as well as the players.  Only at crime scenes in Forties movies do photographers — real ones — get in front of other people who are trying to see.

And even photographers with elaborately “professional” equipment have cameras that set off strobe flashes with the impact of small-arms fire (to say nothing of the clicking and beeping with each shot).

I asked several professional photographers I know — people who make their living photographing musicians and dancers — about this, and the consensus was solid: people who know how to use their cameras shut off the flash and set the camera or phone for a higher ISO speed . . . so the camera and the photographer are both unobtrusive, which is the ideal we all might aim for.

Wouldn’t it be delightful if the musicians were the whole show, not the fireworks in the audience?

Posted in Awful Sad, It's A Mystery, Pay Attention!