Although others have justly celebrated her, I was unaware of pianist Roberta Piket until she sat in on a Lena Bloch gig at Somethin’ Jazz at the end of April 2012.  Then I heard the lovely, inquiring sounds that she made: she appears on the final two performances here. 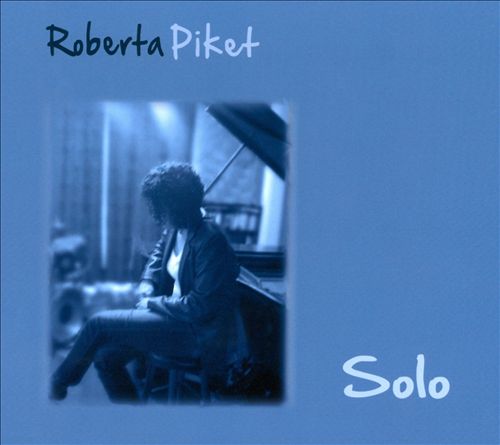 I am even more impressed by her latest CD, called simply SOLO.

My early introductions to solo piano were, not surprisingly, based in swing: Waller, Wilson, James P., Hines, Williams, Tatum, and their modern descendants — players who appropriately viewed the instrument as orchestral, who balanced right-hand lines against continuous, sometimes forceful harmonic / rhythmic playing in the bass.  I still admire the Mainstream piano that encompasses both Nat Cole and Bud Powell, but I no longer feel deprived if I listen to a solo pianist who approaches the instrument in a more expressive way, freeing both hands from their traditional roles.  To me, James P. Johnson’s IF DREAMS COME TRUE, Wilson’s DON’T BLAME ME, Tatum’s POOR BUTTERFLY, and almost anything by Jimmie Rowles scale the heights. But I know there are fresh fields and pastures new beyond those splendid achievements.  And players who are willing to explore can often take us on quite rewarding journeys.

Roberta Piket is on her own quest — although she notes that SOLO was, in some ways, a return to her own comfort zone.  But within that zone she both explores and provides comfort for us.  For one thing, her choices of repertoire are ingenious and varied: Arthur Schwartz, Monk, Strayhorn – Ellington, Bruno Martino, Wayne Shorter, Sam Rivers, Chick Corea, Marian McPartland, and Frederick Piket.

Her work surprises — but not for novelty’s sake alone — and whose variety of approaches is intuitively matched to the material she has chosen.  Some solo artists have one basic approach, which they vary slightly when moving from a ballad to a more assertive piece, but the narrowness of the single approach quickly becomes familiar and even tiresome.  SOLO feels more like a comprehensive but free exploration of very different materials — without strain or pretension, the result feels like the most original of suites, a series of improvised meditations, statements, and dances based on strikingly chosen compositions.

The first evidence of Piket’s deep understanding of line and space, of shade and light, comes almost immediately on the CD, as she approaches the repeated notes of I SEE YOUR FACE BEFORE ME with a serious tenderness reminiscent of a Satie piece, an emotion that echoes in its own way in the final piece.  (I hope Jonathan Schwartz has been able to hear this: it is more than touching.)

Then, as soon as the listener has been sweetly and perhaps ruefully lulled, two strong, almost vigorous improvisations on Monk themes follow.  Many pianists have reduced Monk to a handful of by-the-numbers dissonances; not Piket, who uses his melodic material as a starting point rather than attempting to show that, she, too, can “sound Monkish.”

Lovely songs by Strayhorn (SOMETHING TO LIVE FOR) and McPartland (IN THE DAYS OF OUR LOVE) are treated with sincerity and reverence, but Piket does far more than simply play the familiar melody and chords: her voicings, her touch, illuminate from within.  ESTATE shows off Piket’s easy versatility, as she places the melody in the bass and ornaments in the treble during the performance.  Roberta’s precise power and energetic technique are shown in the uptempo original CLAUDE’S CLAWED, Shorter’s NEFERTITI, and Corea’s LITHA — at times powerful investigations that bridge post-bop jazz and modern classical, at times a series of unanswered questions.

The disc ends as it began, with tenderness — Sam Rivers’ BEATRICE,  an easy swinger that seems light-hearted without losing its essential serious affection.  And there’s a prize.  I didn’t know about Roberta’s father, Viennese-born composer Frederick Piket (whose life and work is examined here).  Although he wrote much “serious” music — secular and religious — IMPROVISATION BLUE is a lovely “popular” song I kept returning to: its melody is haunting without being morose, and I imagined it scored for the Claude Thornhill band in a Gil Evans chart.  It should have been.

SOLO begins sweetly and tenderly and ends the same way — with vigorous questioning and exploring of various kinds in the middle.  Roberta is an eloquent creator who takes chances but is true to her internal compass, whichever way it might point for a particular performance.

You can hear some of SOLO at Roberta’s website and at CDBaby.

And this January 31, you will be able to hear Roberta, the inspiring percussionist Billy Mintz (he and Roberta are husband and wife, a neat match), celebrating tenor saxophonist Lena Bloch’s birthday — with bassist Putter Smith and legendary saxophonist John Gross.  Fine Israeli food and wine are part of the party at the East End Temple.  Tickets are $18 in advance, $22 at the door; $15 for students: click here to join the fun.