TO EXCITE THE JADED PALATE: “DINNERTIME FOR HUNGRY COLLECTORS”

Given the instant availability of musical performances that were once only to be imagined, one could excuse jazz collectors for becoming a bit jaded.  With the beautiful “complete” issues from Mosaic and Jazz Oracle, for instance, one could purchase ALL of the Louis Armstrong Deccas, the Count Basie Columbias of the 1936-40 period, the Ellington small and big bands of the Thirties . . . the Red Nichols Brunswicks.  As well, one can purchase collections of music that once were only listings of rarities in a discography: three discs of Jack Purvis’ recordings.

On smaller but equally diligent labels, such as Anthony Barnett’s AB Fable, one can hear Ray Nance, Ben Webster, Jimmie Blanton, Fred Guy, and Sonny Greer jamming in a hotel room in 1941.  If that were not enough, imagine Ben playing clarinet.  CDs on Jazzology and Delmark collecting the solo and band recordings of Frank Melrose.  Beautiful hot rarities on the FROG label.  The Masters of Jazz series — now sadly defunct — which gave us young Dexter Gordon jamming with Bill Harris and Jimmy Rowles, Lester Young on the radio in 1940-2.  (I could go back in my memory to write a long encomium about the various Jerry Valburn issues of the middle Seventies — on his collection of labels.  “It swings!”  But that is for another post. I know that my scant listing of marvels isn’t sufficient, but I trust readers can and will supply their own recollections of collectors’ dreams gratified.)

Still, as one’s collection grows, the possibility of becoming jaded — what more is there to possess? — is ever stronger.  Occasionally, I have caught myself, to my amusement, feeling like a sated Roman emperor for whom the ordinary marvels — centaurs, gryphons, gladiators, nubile virgins — are not enough.

Until today, with the announcement of a two-CD set on the Dutch Doctor Jazz label (thanks to Loren Schoenberg spreading the word on Facebook) that would keep even a drowsy jazz Emperor wide-awake. 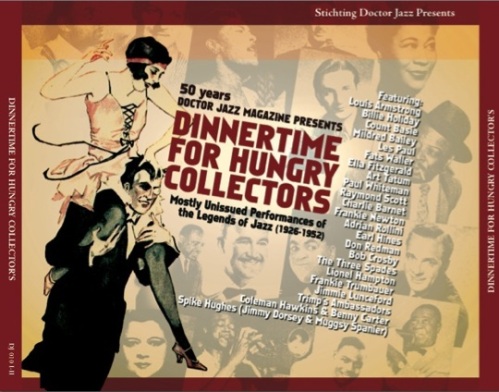 Loren nudged us all by suggesting a most marvelous explosion of possibility — 1939 live recordings, not previously known, by Louis and Sid Catlett, and others by Count Basie and Lester Young.  That would be enough for me.  But there’s more!

Details for Disc 1 here and Disc 2 here.  And a wonderfully detailed review by Max Easterman in VJM can be found here.  Although I now buy CDs more slowly — guided by the occasional feeling of satiety, with visits from Prudence and her sister Financial Wisdom (we call her “Finnie” for short), I ordered this set yesterday.  I couldn’t resist.

Like Loading...
This entry was posted in "Thanks A Million", Generosities, Hotter Than That, Irreplaceable, Jazz Titans, Jazz Worth Reading, Mmmmmmmmmmmmm!, Pay Attention!, Swing You Cats!, The Heroes Among Us, The Real Thing, The Things We Love, Wow!. Bookmark the permalink.

9 responses to “TO EXCITE THE JADED PALATE: “DINNERTIME FOR HUNGRY COLLECTORS””