THE RAGTIME SKEDADDLERS: A FINE TIME AT CLINE WINE (July 2013) 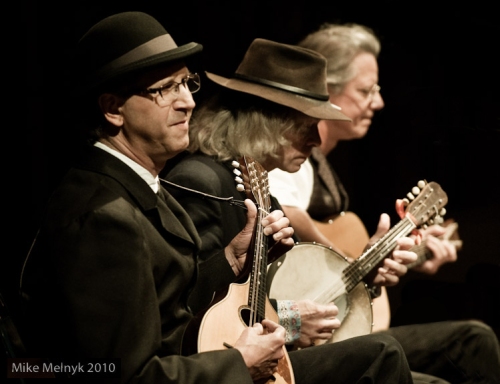 But right now I want to introduce you to THE RAGTIME SKEDADDLERS — a delightful string trio whose music and gentle approach captivated the Beloved and myself as we sat on a porch in a soft breeze.  Unlike other “traditional” groups who take their inspiration from various notions of New Orleans jazz or Chicago jazz, the Skedaddlers go back to a time when string ragtime, light-hearted yet propulsive, was America’s true popular music.  This trio doesn’t speed up or approach the music with either clownish levity or undue scholarly seriousness.  Rather, they are old-fashioned melodists, creating sweet lines that arch and tumble over one another in mid-air. It is as if Dvorak had been transplanted to a Southern or Middle Western backyard picnic or country dance in 1895 and had immersed himself in sweet harmonies and dance-like motions. The Skedaddlers are entrancing on their own, and a delightful change from the often heavy ensembles so prevalent in occasions of this sort.

Neither of the RS’s CDs says much about the band, so I asked for a bit of background on the Ragtime Skedaddlers. Dennis Pash (banjo-mandolin) is the leader of the group. (He’s the fellow in the center of the videos that follow.) Dennis has been playing string ragtime since the Seventies when he was one of the founders of the Etcetera String Band. For more information about the ESB, click here.  In addition to being a great interpreter of ragtime on the mandolin, Dennis has researched and collected materials on string ragtime. He has lectured extensively, co-hosted a series of radio shows on string ragtime, and published an article on the Joplin string arrangements in the Rag-Time Ephemeralist. Dennis formed the Ragtime Skedaddlers in 2009 to perform and record ragtime era music in arrangements for two mandolins and guitar. Dave Krinkel (guitar) and Nick Robinson (mandolin) mostly played old-time string band music before Dennis sparked their interest in ragtime. The Skedaddlers have become regular performers at ragtime festivals in California, and have also played to audiences more used to the sounds of old-time and bluegrass string bands. The Cline festival was their first appearance at a traditional jazz festival, and they held audiences — both the people on the porch and others walking around listening to the sweet strains — entranced.

Now, you’ve read enough.  Enjoy this rare and delicious pastoral music!  In the videos below, Nick is closest to the camera, playing a National Reso-Phonic mandolin; Dennis is in the center playing a banjo-mandolin, and Dave farthest from the camera playing guitar.

The Skedaddlers have created two CDs, both of which have scholarly (but not dry) information about the songs and their composers.  Both CDs can be purchased here, and can also be found through CDBaby, Amazon, and iTunes.  The next few shows that the RS will be playing are Saturday, October 19: Wine Country Ragtime Festival, Sonoma, CA 95442, and Saturday-Sunday, November 23-24: West Coast Ragtime Festival, 1401 Arden Way, Sacramento, CA 85815. 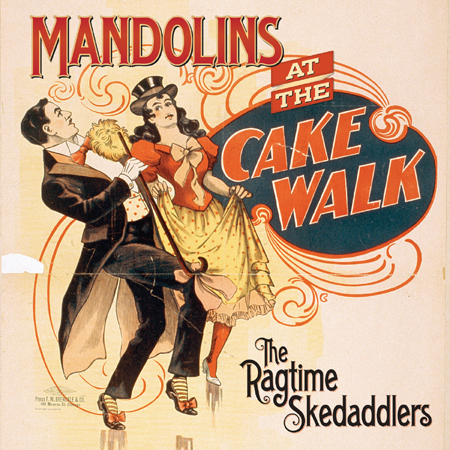 Posted in "Thanks A Million", Bliss!, Generosities, Ideal Places, Pay Attention!, Swing You Cats!, That Was Fun!, The Heroes Among Us, The Real Thing, The Things We Love, Wow!