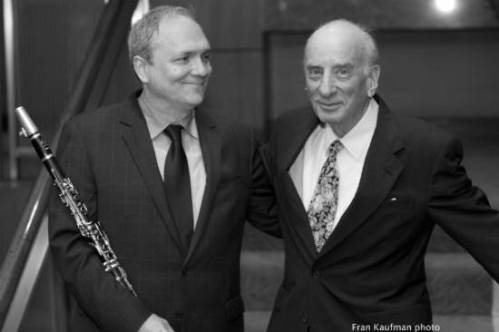 I had a great deal of trouble writing this review of the new duo CD by pianist Dick Hyman and clarinetist / saxophonist Ken Peplowski because I didn’t want to take the disc out of the car player.  (So the punchline here is: BUY SEVERAL.)

Years ago, Dick recorded a solo album for Monmouth-Evergreen with the title GENIUS AT PLAY (and a cover image of an orange road-construction sign).  The people at Victoria Records, bless them, decided that GENIUSES AT PLAY wasn’t a good title, so the disc is called simply LIVE AT THE KITANO — a selection of titles created on the spot by Dick and Ken in 2012.

I know that in the swirling maelstrom that I might whimsically call “the jazz marketplace,” a disc such as this has a good deal of competition.  On the surface, it doesn’t “push the envelope”; it doesn’t “transcend old frontiers”; it isn’t “cutting edge.”

But those terms, so beloved of the most extreme publicists, are irrelevant here, because what Dick and Ken do is explore, improvise, and play, all beautifully. They are masters of “tonation and phrasing,” which is to say that they play melodic lines with warmth, intelligence, and humor — they know, for instance, how to pace out the notes of BLUE ROOM so that the upward leaps of the melody sound wistful rather than mechanical.  To make an instrument speak and sing is not easy, but they do it in ways that amaze other players.

And when they get together in duet, magic results: a playful conversation that both fits and expands the mood of the song without tricks or gimmicks.  I keep returning to the idea of PLAY — a word that means more than the logo on top of a button on a digital answering machine — for Hyman and Peplowski, because they are brave, carefree, and wise in their joyous romps or musical experiments.  No atonality, no showing-off-for-its-own-sake, but the sweet assurance of wise players who know what they can do in the service of Song.  And they are clearly inspired by one another: Hyman has always been a gentle sparkplug, someone who sweetly and gently encourages exploring, and Peplowski fears nothing.  Even critics who keep insisting that he sounds like Benny.

The repertoire is wide and imaginative, but always strongly based in melodies: BLUE ROOM, GONE WITH THE WIND, I MEAN YOU, YELLOW DOG BLUES, LUCKY TO BE ME, THE WORLD IS WAITING FOR THE SUNRISE, UGLY BEAUTY, MY SHIP, LOVER COME BACK TO ME – QUICKSILVER.

Ken plays tenor on WIND and LOVER — most beautifully, I might add. And although the session was recorded live in a room with people and glasses, the occasional rustles aren’t distracting — rather, they enhance.

The disc is issued by Victoria Records; it’s VC 4393, and it’s a masterpiece. Better yet, it’s deeply moving music and great fun. All at the same time.

Posted in "Thanks A Million", Bliss!, Generosities, Hotter Than That, Irreplaceable, Jazz Titans, Mmmmmmmmmmmmm!, Pay Attention!, Swing You Cats!, That Was Fun!, The Heroes Among Us, The Real Thing, The Things We Love

A RIDDLE: WHAT HAS MANY LEGS AND MANY FRIENDS, SWINGS AND STRIDES?

No, it’s not a playground set.  Or a new insect. Give up?

I know that there will be a good deal of Fats, James P., the Lion, boogie-woogie, some jazz classics and pop standards, a touch of Cole Porter, a whisper of Django, a sniff of Donald Lambert . . .

Three concerts have been scheduled for some time: lucky and wise people bought tickets to the Lesher Center in Walnut Creek, California, for the 5 and 8 PM concerts on Saturday, August 24, so that these concerts are sold out.  (I hope only that this enthusiastic response means a return engagement for this group in 2014.  Is that hint sufficiently subtle?)

But all is not lost.  I believe that tickets are still available for the Sunday, August 25, show at the new SF Jazz Center: click here. If you are not close to this hall, I am sorry. But if you are, come join the party. I don’t think there will be any more asking of riddles, but some questions will be answered from the stage — using notes, not words — such as WHY DOES SWING MAKE US SO HAPPY?

Posted in "Thanks A Million", Bliss!, Generosities, Hotter Than That, Ideal Places, Irreplaceable, Jazz Titans, Mmmmmmmmmmmmm!, Pay Attention!, Swing You Cats!, The Heroes Among Us, The Real Thing, The Things We Love, Wow!