Yes, I know it’s about five weeks early.  But Emrah has provided us with a double delight — a great romantic ballad in swingtime, beautifully sung by Quentin Jackson, with solos by Doc Cheatham, Rex Stewart, and Benny Carter . . . as well as a Carter reed-section passage and rollicking piano accompaniment from Todd Rhodes.

The delights of this performance are many, and they grow with repeated listenings.  The supple, fluid sweetness of Doc Cheatham’s melody statement; the vigorous “I will play a note or two to every beat” solo chorus, so flavorful and personal, by Rex Stewart; the lusciously slippery Carter reeds; the dashing vocal chorus by Quentin Jackson (play this for everyone who insists that before Crosby, all male singers sounded insufficiently masculine), and the rocking motion of this ensemble, thanks to Wilborn, Taylor, and Austin, refuting another canard, that jazz musicians were waiting to get rid of banjo and brass bass so that Modernity could burst forth.

Happy Valentine’s Day, all you lovers. Start your romantic engines early.  Work on becoming just as swoony and loving as the men and women portrayed on Emrah’s photographs and postcards.

Posted in "Thanks A Million", Bliss!, Generosities, Hotter Than That, Irreplaceable, It's All True, Jazz Titans, Pay Attention!, Swing You Cats!, That Was Fun!, The Real Thing, The Things We Love, Wow!

WHEN THEY WERE ALL VERY YOUNG (Part One): MISS LEACOCK, MR. GIFFORD, AND THE FELLOWS

Barbara Lea and the Crimson Stompers, 1948: 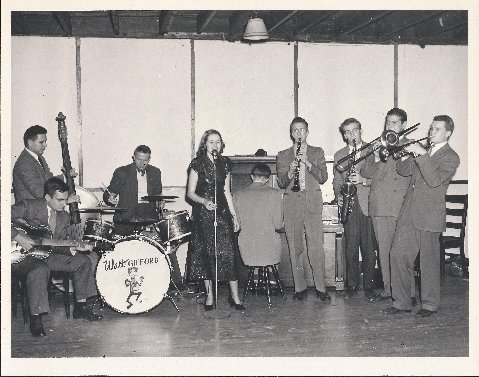 That’s Miss Leacock, Barbara Lea to you, singing as if her life depended on it, with the Harvard small hot jazz band, the Crimson Stompers, in 1948.  Bill “Hoagy” Dumham is at the piano; Walt Gifford is at the drums; Larry Eanet is on trombone; Ollie Taylor is one of the clarinetists . . . and the rest are not known to me, at the moment.  The photograph originally belonged to Gifford, then was passed on to the late Joe Boughton, and it now resides in the Barbara Lea Archives, tenderly maintained by Jeanie Gorman Wilson — and is reprinted here with her kind permission.  Here’s a story from the Harvard student newspaper, which explains everything:

Back in the days when the Crimson Stompers were getting organized, they held their practice jam sessions down on Coolidge Hill Road behind Stillman Infirmary at the home of Charles H. Taylor, professor of History. And they had a cornetist sitting in with the band whose playing Walter H. Gifford, Jr. ’52, drummer and manager of the group, describes as a “mean cornet a la Max Kaminsky.” The horn-player’s name was Sargent Kennedy ’28, Registrar of Harvard College.

During the summer of 1948, Gifford went to a musicians’ hangout in his home town of Washington, D. C., and met a heavy dark-haired young trombonist-pianist named Laurence J. Eanet ’52. It didn’t take long for them to discover two important facts about each other–that they were both starting at Harvard as freshmen that fall, and that they both loved Dixieland jazz.

It was quite natural that, when they came up to Cambridge in September, the two started shopping around for enough men to fill out a little “amusement only” jazz ensemble. Friends told them about a fine guitar player who was a junior at the time–David Sutherland ’50, who is now at the Law School. And then there were three.

“Through the College grapevine” they heard about a fine young clarinetist, Oliver S. Taylor ’53, Professor Taylor’s son, who was then attending the Belmont Hill School. They found that Taylor was not only enthusiastic about joining their group, but that he could also recommend a good trumpeter, a Milton Academy boy named Bruce Elwell. (Elwell, relatively young and inexperienced compared to the others, has since moved on to Rollins College in Florida).

The unit was rounded out by the addition of two classmates, bassist Herbert Levin ’52 and pianist Hoagie Dunham ’52.

They used to go down to Taylor’s home evenings and shake the house with their practice sessions. “The Taylors’ was a proving ground for our band,” Gifford explains. “We really started to play well in ensemble there.” During this period Kennedy enjoyed going to the house at night to sit with the boys.

They started to make trips to the Savoy on Massachusetts Avenue to listen to trumpeter “Red” Allen and the Searsdale (New York) High School sensation, clarinetist Bob Wilber. After a time, when they became known at the Savoy, they would climb up on the stand and take over the nightclub.

One night Dunham showed up with a girl who could sing. He had met Barbara Leacock, Wellesley ’51, on a blind date. The good-looking brunette had a voice that pleased Dunham’s fellow musicians and she became a featured vocalist on the band’s College engagements during the following year. They put on two concerts in the Lowell House Junior Common Room and broadcast Monday nights.

The day before they played at the Freshman Smoker, the entire group trooped down to join the musicians’ union, because New Orleans clarinetist Edmond Hall was coming out from the Savoy to play with them “and the union was watching us like a hawk.” Shortly afterwards they played for the Radcliffe freshmen at Agassiz Hall, where they were paid off in rye smuggled in by an admiring Cliffe girl.

Last year the band started off at the Savoy with the trumpet played by 20-year-old. Tufts graduate Paul Gibson, whom Gifford calls “the best jazz trumpeter this side of New York.” Then they branched out. They went twice to Smith College (Gifford is carried away by the memory where 200 girls in sweat shirts and dungarees sat in a semicircle and shrieked for the real oldtimers like “Coal Cart Blues” (an Armstrong standby). And they found another faculty supporter in Roy Lamson, Jr. ’29 clarinet-playing professor of Sociology at Williams.

They played the college circuit from a house party at Dartmouth to a performance in a baseball cage at a Spring Country Fair at Wesleyan in Middletown, Connecticut. Sandwiched in between were a number of Monday night sessions at the Savoy with bands led by Hall, trombonist Vic Dickenson, and pianist Joe Sullivan.

I was too young to be in that group, but I have heard the Stompers (Frank Chace played with them, and there is a riotous long ROYAL GARDEN BLUES from the session with Ed Hall — alas, neither of these delicious combinations are available on CD for the masses thirsting for the Real Hot Stuff) and wish that such impudent explosions of joy, collective and singular, were happening on college campuses all over the world.  When I go back to teaching, I would give extra credit to any group of students who could play COAL CART BLUES.  That’s a promise.

And Bill Dunham, happily, is still with us, beating it out on Monday nights with the Grove Street Stompers at Arthur’s Tavern on Grove Street off Seventh Avenue in lower Manhattan.  Stop by and tell him you saw his back on JAZZ LIVES.

My French is poor, but I wish to introduce a rocking version of CHINA BOY performed by some of my friends and heroes very early in this new year of 2014:

It was recorded at Pub O’Flaherty’s in Nimes on January 8, 2014, by Armand Yepes (whose video style I admire — it is very reassuring to see people cross in front of the camera in cultured France!) — the musicians are Michel Bastide, cornet; Daniel Huck, saxophone / vocal; Jean-Francois Bonnel, tenor saxophone and more; Bernard Antherieu, clarinet; Philippe Guignier, banjo; Patrice Aviet, string bass; Jeff Guyot, washboard.  I know Monsieurs Bastide and Bonnel from Whitley Bay, M. Guyot from our conversations online, and the others I admire even though we have not met in person.  If someone were to ask me what moves me in jazz right this moment, I would play them this CHINA BOY.  I especially delight in M. Huck’s two irrepressibly joyous scat choruses: how the austere-looking woman on the couch is so reserved is beyond me, but, then again, I am not French.

A thousand thanks, gentlemen. You bring us joy.

Posted in "Thanks A Million", Bliss!, Generosities, Hotter Than That, Ideal Places, It's All True, Jazz Titans, Pay Attention!, Swing You Cats!, That Was Fun!, The Heroes Among Us, The Real Thing, The Things We Love