I first heard pianist Mark Shane a long time ago on someone’s illicit cassette recording of an outdoor festival.  Through the rustlings and the sonic murk, he came through like a beacon of swing.  I heard finely detailed melodic invention owing a good deal to Tatum and Wilson, translucent improvisations with subtleties reminiscent of Hank Jones and Tommy Flanagan.  I had to wait until 2004 to meet him in person, but he didn’t disappoint, and still doesn’t.

When I started to purchase Shane’s CDs (a venture I commend to you) I found he was often in tandem with a glorious singer.  She swung without a letup but her approach was delicate and warm.  She was very much aware of the great singers of the past but had brought her own tender sound to their repertoire. Her work was and is genuine, and when I played her music for other musicians and fans, the reaction was always, “Who IS that?  Wow, she is the real thing!”  I had to wait until 2013 to meet Terry Blaine, and it was a joy to see Mark and Terry perform together.

Not everyone can make their way to a Shane-Blaine gig . . . but their music can come to you.  And it has! 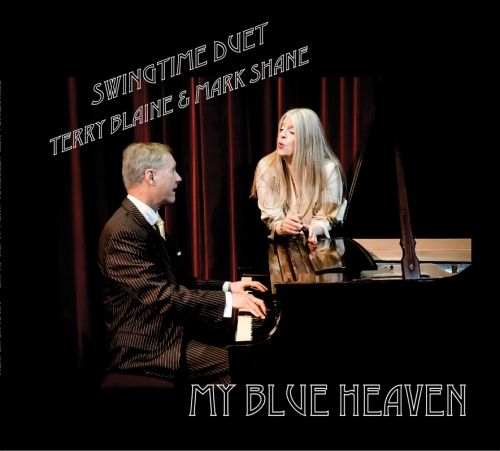 Their new CD is available here at CDBaby (as a physical disc) and will be available at all the usual sources as a digital download in a few days.

When I heard that Mark and Terry had recorded a disc, I asked to write some notes for them:

Our special friends are back in town, and I am so grateful.

Play a piece of music for a jazz historian and ask for a response: you’ll get an analytical primer of famous names, influences and styles, cities, dates, and record labels. A musicologist will talk of rhythmic and harmonic patterns, ethnic and cultural influences.

But music is much larger than the words and ideas that attempt to explain it. It is vibrating energy sent from its creators’ hearts to ours. True, physical entities are part of it: the uniqueness of a singer’s voice, a pianist’s touch on the keys. But ultimately music is one marvelous way that artists, devoted to feeling and craft, send messages to us.

Terry Blaine and Mark Shane are remarkable transmitters of wondrous vibrations. In the Thirties they would have been called “solid senders.” Although they have lovingly studied the great improvisers of the past, they emerge whole and joyous as themselves. In swinging synergy, Terry and Mark travel through and beyond any song. Hearing them, we emerge, refreshed and nourished by what they embody in music. They do not “imitate”; they do not approach the music from an ironic postmodern distance. They are the emotions they transmit – sly hilarity, pleasure, longing, romantic fulfillment, contentment. This is the real thing, without pretense, full of warmth.

In the first minutes of this disc, a listener will hear great sincerity in music that never parades itself, an art secure in its wisdom. Terry’s voice is sweetly intuitive, connected to the mood of each song. The way she slides from one note to the next is a caress. Her approach is both generous and wise, for she always lets the song shine through. Mark Shane is a master of delicate yet profound swing; he honors the great musical traditions by creating an orchestra at the piano, with unceasing rhythmic motion. A simple melody statement in his hands has the fluidity of a river, with currents of shading and light, surprising depths and textures. Mark and Terry are a marvelous team, a musical community that needs no other players. Their interpretations of music and words are whole-hearted gifts to the composers, the lyricists, and to us.

We know what our response to this music is: it makes us feel the joy of being alive. We’re happy in the Blue Heaven Terry and Mark create for us. You will be, too.

The songs are MY BLUE HEAVEN / HONEYSUCKLE ROSE / AIN’T HE SWEET / SKYLARK / LOCK AND KEY / MY MELANCHOLY BABY / ROCKIN’ CHAIR / I LOVE BEING HERE WITH YOU / THE NEARNESS OF YOU / THERE’LL BE SOME CHANGES MADE / MY SPECIAL FRIEND IS BACK IN TOWN / COME UP AND SEE ME SOMETIME / LET’S DO IT / SOME OF THESE DAYS / WRAP YOUR TROUBLES IN DREAMS.  The recording is delightfully clear and unadorned. It’s heavenly.

In case you have never heard Mark and Terry before, here is a performance recorded at the High Falls Cafe in New York, with drummer Matt Hoffmann gently joining in.  Their rollicking WHEN DAY IS DONE is a joy:

Posted in "Thanks A Million", Bliss!, Generosities, Irreplaceable, It's All True, Jazz Titans, Mmmmmmmmmmmmm!, Pay Attention!, Swing You Cats!, That Was Fun!, The Heroes Among Us, The Real Thing, The Things We Love