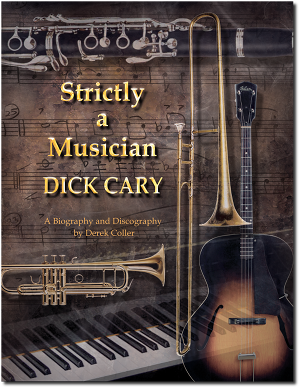 Usually a reviewer waits until (s)he has finished the book before writing. I’ve only read one-sixth (one hundred pages) of Derek Coller’s biography of multi-instrumentalist / composer / arranger Dick Cary, but I didn’t want to wait to tell you how good it is.

I think it is one of the most important books about how it feels and what it means to play jazz in public.

Cary (1916-1994) is one of those figures in jazz — invaluable but shadowy — whose identity is defined by associations with famous names.  A long time ago, I knew him the pianist in Louis Armstrong’s first All-Stars. Listening to TOWN HALL CONCERT PLUS over and over, I heard him as a masterful accompanist, deferentially but beautifully showing the way, never intruding, quietly swinging in delicate fashion.  Later I delighted in his brilliant, nimble trumpet work — soaring in ways reminiscent of Bobby Hackett.  But it was as the great swinging exponent of the Eb alto horn (the “peck” horn) that he made the greatest impression on me: hear him on Eddie Condon’s JAM SESSION COAST TO COAST or JAMMIN’ AT CONDON’S. More recently, I admired his arrangements and compositions performed and recorded with his “Tuesday Night Friends” on Arbors issues.

But even when I noticed his always welcome presence, I never attempted to piece together the evidence to ask, “Who was this Dick Cary?”

I am so glad that Derek Coller — a very well-respected researcher and a fine straightforward writer — has done so. Derek has a well-earned reputation for intelligence, empathy, and candor, so the book is honest and thorough, without being ungenerous.

So many respected volumes (in and out of jazz) are well-crafted syntheses of what others have written. STRICTLY A MUSICIAN is entrancing because of its tireless use of first-hand “new” materials. The book has been written with the help and complete cooperation of pianist Jim Turner, who inherited the Dick Cary Estate and maintains the Cary website.  Cary was interviewed by a number of people, including the late Floyd Levin; friends saved his correspondence and recalled his stories.  But the spine of this book is Cary’s diaries, which he kept (with a few gaps) from 1931 to 1994 — 56 diaries in all.

I feel so grateful for this possibly vanished phenomenon.  Had Cary lived in our times, and communicated by email and social media, his introspective recollections would be gone.  His diaries are essential to our understanding of his life, his work, and his sensibilities.  Keeping a diary is by definition a private act but Cary kept his (unlike Philip Larkin) because he wanted to share — posthumously, I assume — what he had seen, done, and felt.

Anyone’s diary might be intriguing as a candid record of daily experiences and perceptions, but the diaries of musicians — creative individuals making a living in the public sphere by being asked to “perform” in public, to interact with the audience at close range — are bound to be fascinating.

Being human asks us to balance one’s public and private selves.  It isn’t always a battle, I hope, but musicians are on display.  They smile at the bandleader; they shake hands with fans; they might speak more candidly to their colleagues on the stand, but in general we meet their public selves when we ask for an autograph or thank them for a great set. A musician who is candid without tact on the microphone may enjoy the sensation for the moment, but might lose an opportunity for a job, so the Public Self is firmly in place for most of them until they speak among themselves or with others they trust.

Cary’s diaries — and this rewarding book — give a reader a deep feeling for what a working musician sees and experiences, and Coller uses this material wisely, sparingly, yet to great effect.  The book is not a day-to-day record of aches and pains, physical and emotional (although Cary does complain). The diaries contain details that make a typical jazz fan excited: who was on the gig last night, who played what, who was “helpless” from alcohol before the evening was over.   We learn what a night’s work paid in 1944. We find out who is a pleasure to work with, who is a total bore or sharp-tongued mocker.

Through these excerpts from Cary’s diary, we are taken behind the scenes.  Those of us who do not play professionally will find it as close as we will ever come to being part of the band.  No, bands, for their are many. Reading this book, I often felt as if I were sitting with Cary at a small table, and he had decided I was a trusted friend, someone to whom he could share his inner life.

This is invaluable, and it goes beyond the anecdotal.  Coller admires Cary but does not pretend that The Jazz Hero was saintly, so we get a clear sense of Cary as someone who speaks his mind, and not only to his diary. But Coller (unlike many other modern biographers) is not interested in revealing that The Jazz Hero was A Bad Person. When Cary is irritating or foolish — in retrospect — we learn of it, and the book moves on.

A pause for some glorious sounds.  Here’s a sample of what Cary sounded and looked like in performance (with the Climax Jazz Band — he’s the bearded fellow playing an alto horn to the right):

Back to the book.  In the first hundred pages, I encountered head-spinning details of jam sessions, of arranging for Glenn Miller and Benny Goodman.  What it was like to walk home after a gig with Eddie Condon.  How Jack Teagarden came and tuned the piano first on every gig he was on.  That Rod Cless asked Cary (in Pee Wee Russell’s hearing) what he, Rod, could do to be more like Frank Teschemacher. What it felt like to hear Tatum in the forties.  How Dick Hyman — age 21 — appeared to Cary. Cary’s hearing and meeting Charlie Parker. A dinner with Charlie Creath and Zutty Singleton (gumbo!). What being typecast as a “Dixieland” musician did to Cary. An early sighting of Barney Kessel.  The Eddie Condon Floor Shows and the 1944-5 concerts. Working for Billy Butterfield and Jean Goldkette, and Cary’s six-month tour with the first Louis Armstrong All Stars. Cary, in 1941, playing BODY AND SOUL and THE SHIEK OF ARABY with Coleman Hawkins and Sidney Catlett at a Boston gig. Portraits of Brad Gowans, Wild Bill Davison, George Brunis, Danny Alvin, and Nick Rongetti.

Cary was articulate — one of those straightforward writers who captured one aspect (perhaps a transient one) of someone’s personality in a few sharp strokes.  And he was also just as ready to put his own playing and conduct under the microscope.

STRICTLY A MUSICIAN (a phrase that Barney Bigard used to praise Cary instead of Earl Hines) is an enthralling book — one that I have been rationing my reading . . . so that I won’t finish it too quickly. If you love this music, it is invaluable.  Rare photographs, a comprehensive discography, indices, and more. And Coller — who by choice remains almost invisible — is a fine careful graceful writer, shining the light on Cary and his colleagues all the time.

The book is available here, but I also encourage you to contact Jim Turner here and visit the Dick Cary Music site, which has treasures to share. Jim tells me that Dick’s “Tuesday Night Friends,” his rehearsal band, is still going strong after twenty years — because of the devotion of the musicians to Dick’s music.

5 responses to “JAZZ WORTH READING: “STRICTLY A MUSICIAN: DICK CARY” by DEREK COLLER”