William Carlos Williams: “Forcing twentieth-century America into a sonnet—gosh, how I hate sonnets—is like putting a crab into a square box. You’ve got to cut his legs off to make him fit. When you get through, you don’t have a crab any more.”

Robert Frost: “Writing free verse is like playing tennis with the net down.”

Younger, I would have sided with Frost: too much freedom leads to chaos. But I celebrate Williams’ position (even though his metaphor makes me wince) more as I age, feel, and listen.  Tidiness is a wonderful thing in the kitchen cabinets, but it might lead to the slow death of creative improvising.

In that spirit, I present the latest works of saxophonist / composer / historian / scholar / seeker Allen Lowe, a four-CD set of original compositions with one exception, a spoken-word piece by the novelist Rick Moody. 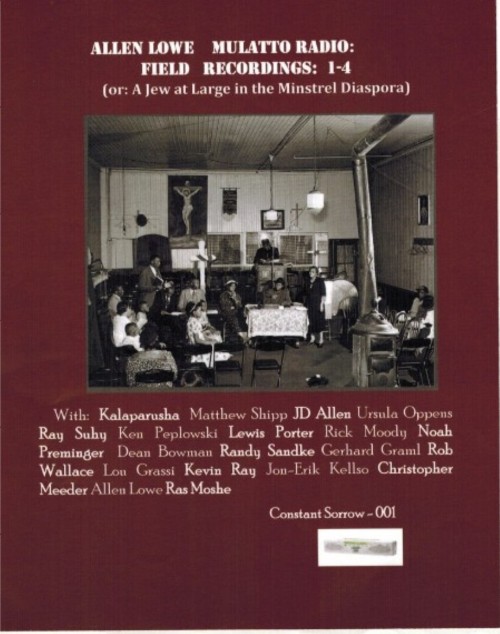 JAZZ LIVES readers will be familiar with many of the names on that cover; others will provide engaging and sometimes quizzical surprises in listening and emotion.

Lowe’s works don’t seek to present snapshots of particular eras; they don’t offer “styles or schools.” Rather, his imaginations are intense, deep, yet unfettered. FIELD RECORDINGS, Lowe says in his liner notes, grew out of an argument he had with Wnton Marsalis — during Lowe’s attempt to interview Marsalis.  Disagreeing about “minstrelsy,” Marsalis characterized Lowe — in Lowe’s words — as “merely another in a long line of deluded white academics.”

Lowe spent the next six years immersing himself in “early entertainments of every racial persuasion,” which led him to compositions — song forms — that reflected what he had heard and experienced.  He also plays and improvises on many of these performances heard in this CD set.  More details here.

Lowe writes, “There is a tradition in certain kinds of writing in which the writer takes past works and puts them to his own use for very specific philosophical and artistic reasons. Brecht called this copien, as in the use of older texts as a means to something new and different, as a method from which to challenge prior ideas and forms. This project was done in exactly this spirit, as a way of altering certain received ideas of popular and jazz song. It is also a challenge to certain formal and intellectual assumptions.”

I haven’t heard more than one quarter of the set, but found the music so inspiring that I wanted to spread the word about it.   The performances weren’t always easy to listen to — Lowe, as composer and player, doesn’t shy away from improvisation’s rough edges, but he doesn’t run into harshness for its own sake.

What I appreciate most about the music — I was listening both with and without the benefit of Lowe’s commentaries — was its depth of feeling and innate ability to surprise.  The surprises weren’t ones I could predict (I know that sounds like an illogical paradox, but listening to many of the great musicians, I feel I know “where (s)he might be going” in the next chorus).

Rather, I felt the ground shifting under me in the best sense of the metaphor. Over and over, I felt beautifully startled, gently lifted out of my expectations and planted somewhere else, experiencing the sounds from a different perspective.  Each voyage was a fascinating series of what Emerson calls “zig-zag tacks.”  I heard echoes of New Orleans polyphony and street parade, dark unrequited blues, ensemble questing that echoed Mingus and freer improvsations, with searching, winding melodic lines, unpredictable harmonies that felt good as soon as they found my ears.

Language has a hard time describing music in the best of circumstances, and words are particularly inadequate here. One must be a creative listener to feel Lowe’s many musics, but they are well worth the investigation.  He is honest, inquiring, and sly — as is his work on these four CDs.  But beware!  This set is not ear-cushioning, to be listened to in conjunction with household chores, nor is it meant to be heard as one hears some discs: seventy-five minutes of supple protection from the world.  I predict that the listener wise and brave enough to purchase the FIELD RECORDINGS will approach the music as one does a new book of poems: a poem or two at a time, rather than as an artistic devouring of it all.

The curious — and I hope there are many — will listen to samples here and then plunge in — this set costs less than two CDs and is wonderfully lively. You can also learn more at Allen’s website and blog (called EVERYTHING ELSE IS POST MODERNISM) — where Frankie “Half-Pint” Jaxon and Norman Mailer, compelled to share a subway seat, eye each other with suspicion.

I admire Allen Lowe’s courage, range, and audacities. The music is often, on first hearing, “weird,” but that’s a compliment. A little weirdness is like good seasoning: so much missed in the music we are sold, so richly enhancing in the right proportions.

And to return to the austere Robert Frost.  My letter to him, unsent and unread, is as follows: “Dear Mr. Frost. If you removed the net, you might not have tennis, but you certainly would have an engaging dance.”

Posted in "Thanks A Million", Bliss!, Generosities, Irreplaceable, It's A Mystery, It's All True, Jazz Titans, Jazz Worth Reading, Pay Attention!, Swing You Cats!, That Was Fun!, The Heroes Among Us, The Real Thing, The Things We Love, Wow!