The renowned (diligent but never stuffy) scholar of jazz on film, Mark Cantor, is also a generous fellow, and he has launched a new website.

There, you can see and hear Fats Waller, Joe Marsala and Adele Girard, Louis Armstrong, Mary Lou Williams, the Washboard Serenaders, Andy Secrest, Benny Carter, Connee Boswell, Red Nichols, Lionel Hampton, Harry James, Dave Brubeck, Punch Miller, Lady Will Carr, Ethel Merman and Johnny Green, the Max Fleischer team of surrealists, Leo Watson, Teddy Bunn, Ray Eberle, Sidney Bechet, Thelma White, Buck and Bubbles, Maude Mills, Gerry Mullingan, the MJQ, Jack Teagarden, Buddy Rich, Oscar Peterson, Bill Robinson, Louis Jordan, Joe Williams, as well as groups and musicians we might never have heard about — the daring Sandra among them — and a few mysteries: unidentified players just waiting for you to recognize them. (If you are interested in footage of “the girls in the band,” you will find some here as well.)

Some of these films and excerpts are familiar, but many are rare: offered here for your viewing in the best available prints with good sound and clear images.

Some groups sound larger than their numbers.  Whether the reason is experience, community, or intuition, they blossom on the stand, emerging as an entity more gratifying and complete than their individual personalities, instruments, and sounds.

Here’s a trio of piano, cornet, and guitar.  Close your eyes and you could think you are listening to a six or seven-piece band.  Open your eyes, and you wouldn’t miss a clarinet, trombone, string bass, or drums.

Such magical synergy doesn’t happen as a matter of course — but it did last Sunday, March 24, 2014, when Mike Lipskin (piano), Leon Oakley (cornet), and Paul Mehling (guitar) delighted us.

Here are eight performances from that evening — cheerful music imbued with the sweet spirit of Fats Waller and his Rhythm. Mike, Leon, and Paul don’t copy people or records, but their buoyant joy in playing evoked the swing Masters.

BABY BROWN, for and by Alex Hill:

SPREADIN’ RHYTHM AROUND, that 1935 anthem:

A romp on AVALON:

YESTERDAY (the Lennon-McCartney soundtrack of the late Sixties, but watch out for the later choruses):

Messrs. Lipskin, Oakley, and Mehling play a variety of gigs with a variety of ensembles, from solo piano to gypsy jazz to a stomping two-trumpet band . . . catch them while you can!  (They are, singly and collectively, the real thing.)

Imagine an engrossing book “about” jazz that has very little to say about the music. None of the usual content or digressions: anecdotal stories of musicians; portraits of club owners, record producers, concert impresarios. No one’s mother plays the organ; no one has a loving mentor or a horrible first gig.

But the book, MORE IMPORTANT THAN THE MUSIC, by Bruce D. Epperson (University of Chicago Press, 2013) is an intriguing study of something most people involved in the music in more than a casual way find invaluable: discographies. 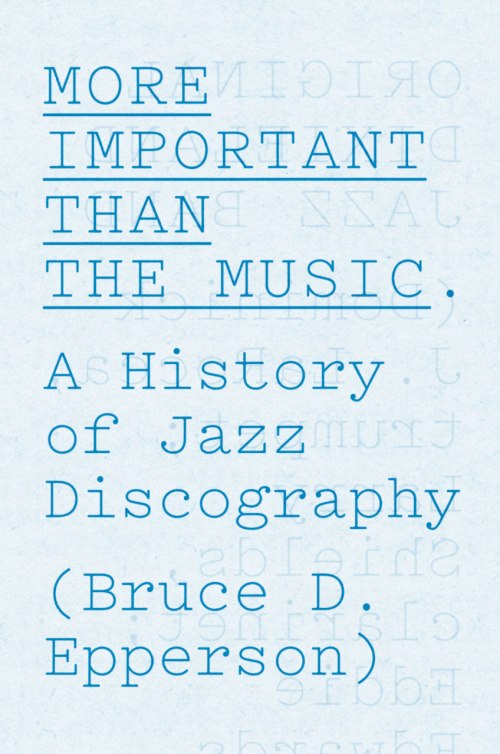 A discography, for those new to this, is an essay — or book-length — or a dozen volumes — or an online source — that documents the recorded history of this music. As a bibliography (at the end of your fifth-grade report on The Eye) lists the works consulted, a discography seeks to present all the information known on these recordings.  It can be limited to one artist, a span of time, a style or genre, or it can attempt to be encyclopedic, comprehensive.  Before jazz existed, of course, there were catalogues of compositions — think of the BWV numbers or Kochel numbers for Bach or Mozart.  But it was only when listeners and collectors began seriously to both amass and study recorded evidence — artifacts of performance — that the idea and the actual realization of discography came into being.

Epperson comes to this book (the result of five years’ study — and it shows in the best way) from a singular perspective. He is neither a musician nor a collector; rather, he is a bibliophile fascinated by the books and the people who envisioned and created them. (For some “jazz readers,” this is a perspective that takes some getting used to. It is as if one was handed “a study of Shakeapeare” that was really a history of the most renowned and influential editors of the texts of the plays. If one feels at a distance reading about everyone from the first innovators up to Tom Lord, Epperson’s lively prose will stand up to the accompaniment of one’s favorite recordings — all the master and alternate takes in chronological order, of course.)

A good deal of the book is a serious but not dry historical survey of the form — discographical research and publication, as we know it, began in England in the late Twenties and continues as I write this. At first, it was an outgrowth of the urge common among collectors to know all so that all could be possessed. If one fell in love with the sound of Bix Beiderbecke or Eddie Lang, for instance, one wanted to know exactly what recordings they had appeared on (and which were tempting imitations) so that one could, in this world or an ideal one, possess all their music or at least know that it existed. I think of an orinthologist’s “life-list,” where birds spotted get checked off, and I have seen many discographies that are also tidy or untidy lists of what a particular collector has. (I’ve done it myself, and I recall reading my copies of Rust, Jepsen, Lord, and specialized discographies with a mixture of awe and yearning: “Another take of X MARKS MY SPOT exists?  And it was issued on Bolivian OKeh?  And I don’t have it?  How can I hear it?”)

Why were discographies desirable or necessary?  When jazz performances were issued on single discs, often without the individual players listed on the label, one couldn’t be sure who the Kentucky Grasshoppers or Lil’s Hot Shots were. One could trust one’s ears, but that method has often led to what I would call Collector’s Enthusiasm, where every muted trumpet solo had to be by King Oliver; a vague aural shadow of saxophone on a 1934 Clarence Williams record — could that be Lester Young?  So, at first, they were lists created by collectors, then made public as more widespread enthusiasm about famous and obscure recordings developed.  Then, discographies could serve an ideological purpose: all the recordings in these pages have notable “jazz interest” (translation: they reflect my aesthetic values); they could be divided along racial lines to reflect theorizing about the development of an art form.  From more balanced perspectives, they could reflect much about the ways in which art was made public, and tell a great deal about individual artists or groups.

Epperson’s book deals adeptly with the ideas behind the varieties of discographies, and he does so by specific reference — tracing the changes in the form through specific publications and the writers / researchers responsible for them. This might, to the uninitiated, seem like a scriptural list of begats beginning with R.D. Darrell, but the creators themselves seem to have been at best energetic, at worst acrimonious. There are many small contentions documented in this book: questions of accuracy, of plagiarism, of theory and practice. Epperson’s story begins in England, takes in France and New Orleans, digresses most pleasingly into the phenomenon of “field recordings” and the changes brought in discography and record collecting by the long-playing record, and comes up as close to the present as possible. I was amused and pleased to see jazz scholars I know and admire depicted in these pages: Jan Evensmo, Manfred Selchow, Robert Rusch.

Epperson concludes with some deep philosophical questions (with commentary by Michael Fitzgerald, who knows the field deeply): in this new world, where it appears that everything one wants to hear can be heard in digital format, stripped of its evidence, what effect on discography as a scholarly endeavor or a music-lover’s act of reverence? And for the twenty-first century listener who can have all the issued and some unissued recordings of The Bohemian Stompers in one neat multi-disc set, are comprehensive discographies necessary or are they an antique manifestation of the urge to have all the rarities in one place?

Incidentally, the title isn’t Epperson’s point of view — it comes from a 1947 article by Ernest Borneman, “The Jazz Cult.”  The book has useful illustrations of pages taken from the respective discographies, generous footnotes and bibliography.

I think this book will have a lasting place in the libraries of many jazz enthusiasts and collectors, and I can see it treated with equal pleasure and respect in graduate programs in library science. But that makes it sound too serious. Epperson is a lively, witty writer, and although he tends to fairness to all sides so thoroughly as to occasionally seem diffident, his sharp observations are a real pleasure.

I said at the start that the book was different from most jazz tomes in that it wasn’t deeply based on anecdotage, but one story has stuck in my mind.  The renowned British discographer Brian Rust, Epperson tells us, was already collecting jazz records by the time he was 13 — in 1935 — “it was cheap, and it was approved by the family nurse, who assured them that ‘it’s not possible for germs to survive on smooth surfaces.'”

If anyone comes to you and asks what you are doing, for the love of goodness, with those records or compact discs, feel free to offer that answer.  Jazz records are, if nothing else, sanitary, and thus laudably safer than other objects by which we might amuse ourselves.

Posted in "Thanks A Million", It's All True, Jazz Worth Reading, Pay Attention!, Swing You Cats!, The Real Thing, The Things We Love