(If John Hammond were alive, this band would already have a contract with English Parlophone, be playing at Smalls Paradise, and be broadcasting over WEVD . . . but it’s 2014, and we have to make such things happen for ourselves):

and another set of KAPERS:

Who are these Swing miracle-workers?  Why, they are the Thrift Set Orchestra, a band based in Austin, Texas.  At their site, you can read the biographies of the individual musicians and learn more about the group. I don’t see a place where one can request an autographed picture of the TSO, but soon that will be necessary, as jazz and swing dance fans coast-to-coast get the message.

If the Thrift Set Orchestra looks familiar to you, it might be because I posted two versions of their THE MOOCHE in honor of the band and of Ellington’s birthday here.

What makes them so special? I have to put them in context. There are many other youthful jazz bands out there devoted to the music of the Swing Era (and by that I do not mean formulaic versions of IN THE MOOD for dancers), and they all serve a useful function.  But few of them play as convincingly and with as much inventiveness as the TSO.

Some bands execute transcriptions of the original arrangements and recorded solos splendidly (no harm done there); other bands offer their own improvisations (likewise); some bands woo audiences with energy and vintage clothing or snappy uniforms and Art Deco stands (visually appealing for those who like spectacle).

But for me the deepest question is always: “What does the music sound like if I close my eyes?  Does it please my deepest self?”

I know it might seem odd, but for me, the test for a new CD is the car — my Old New Car with a decent sound system.  Driving somewhere with a previously unheard disc in the player, I can’t read the liner notes or check who’s soloing on track six.  I can only listen. And my response to the TSO disc was nearly ecstatic. I played it once, then again. And in the next few days I played it every time I drove, even for a five-minute errand. Driving on a main street in a suburban business district, I made sure to lower my windows so that everyone could hear the TSO put their own stamp on NOBODY’S SWEETHEART, BLUE DRAG, or HELLO BABE. No one came over at a stop light to ask the source of this joy, but I am convinced that I did some good, even subliminally, by offering this swinging beauty to innocent bystanders. Spreading joy to children who have never read a book about improvisation.  “Mama, that man had music coming from his car!” “Hush, child! We’re going home right now.”

Back to the sounds. The TSO is a compact, energetic, and accurate jazz-swing orchestra, with players who can read and improvise in an idiomatic yet loose manner, and who can swing convincingly on their own solos. Their ensemble playing is authentic but not stiff, the solos inventive and personal. The band echoes Ellington and Bennie Moten, but it has its own Western Swing spiciness too.  The CD offers a pleasing mix of classic songs and originals, as well as less familiar Thirties evocations (not copies) of Freddy Taylor, Cab Calloway, Bob Crosby, Jean Goldkette, informal sessions at Squirrel Ashcraft’s featuring Bill Priestley on cornet. Guitarist / vocalist Albanie Faletta sings deliciously on BLUE DRAG, and trombonist Mark “Speedy” Gonsalez plays Roy Eldridge’s ROCKIN’ CHAIR marvelously as a feature for the lower-register horn, getting every note splendidly in place. David Jellema’s cornet shines throughout, nimbly evoking early Hackett, and he adds his clarinet to the ensemble when a trio is called for. The two-man sax section of Graulty and Doyle, switching horns, is absolutely a model — and their soloing is individual yet idiomatic in the best way.  Anchored by Hal Smith’s perfect drumming (you could listen to any of these tracks for the drumming alone and be refreshed), the rhythm section rocks — no pianists need apply.

The overall sound of the band is both light and intense, and there is no hint of pretension or stiffness. They don’t sound as if they can’t wait to get back to their post-Coltrane modal studies. The rhythm section is powerful but never obtrusive, and the horns glide from lyrical solos to speaking gutty truths through their horns (trombonist Mark could be our generation’s Snub Moseley, and we welcome him!).  The TSO, in addition, has the sound of a working band: people who are used to playing together and who enjoy each other’s musical company.

Had this CD had simply been expert recreations of recordings, I would have been far less enthusiastic.  Although eleven of the tracks here display some allegiance to recorded performances, each of them has small delicious surprises: brief horn solos where one wouldn’t expect them, a brief horns-only passage in SUNDAY; the welcome presence of a banjo on HELLO BABE; friendly adjustments, adaptations, and inventions: new touches that seem just right, something that Foots Thomas or Bill Challis would have liked just fine.  Witty musical ingenuity rather than idolatrous museum-quality reproduction is the result.

And in case you are someone with a record collection, muttering, “I’d rather hear the originals,” the TSO has some new originals to offer you, danceable melodies with memorable lines — most of them taking a single melodic phrase and moving it around in the best Waller style to create tunes that don’t leave your head.

You can purchase the CD here for $15 plus $3 shipping. 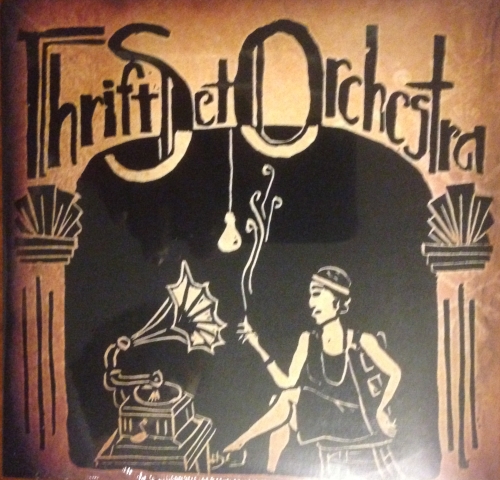 I predict a brilliant future for the TSO. I’m delighted they exist. We need them — a musical embodiment of Bach’s Rescue Remedy.

And as for its band name — the Thrift Set Orchestra, here’s what its creator Jonathan Doyle told me: “The name came from a thought around the idea of the economy of size of the orchestra, or maybe about an economy of musical style. It might have been about recycled culture too, finding clothes and records in thrift stores and putting all of the styles from the different eras together as one pleases, embracing beautiful and interesting things from the past that have lost value in contemporary society.”

The TSO embodies a beautiful philosophy in their music.