THE ELDERS CONVERSE. THE BIRDS SING. 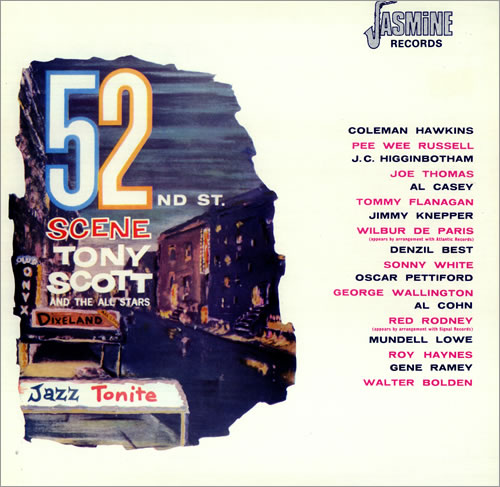 On the surface, what follows is a video recording of a vinyl record turning, the sound captured by the most primitive means — the camera’s microphone aimed vaguely at the “record player”‘s speaker.

Were I more willing to concentrate on the niceties of technology, you would all have this music in more precisely-edged sound, but I have a nostalgic fondness for such archaisms as this. And while I was recording it, I heard a good deal of birdsong — audible while Tony is soloing — from the world outside. I think it a great melding of songs rather than an interference.

(For those who deplore my methodology, this session is available on two Tony Scott bootleg CDs, but you’ll hear no birdsong.  Your choice.)

I took the trouble of videoing this disc because it speaks to me — and I hope to you — in many ways.  For one thing, it is a slow blues, a form of expression often neglected in post-World War Two improvisation, except for rural blues musicians. Everything gets faster, so musicians and audiences often grew restless during a slow blues.  Ballads were fine, because they lasted only a chorus.  But recording a slow blues — aside from wisely utilizing the technology of the time — was a tribute to the way it all used to be, when we all had the time to linger, to muse, to sink deep into a musical world without feeling irritably restless after three or four minutes.

Intentionally, it was called BLUES FOR THE STREET — that block on New York’s Fifty-Second Street, now anonymous, that in the decade between the mid-Thirties and the mid-Forties held a cornucopia of jazz clubs. People who were there said the crowds were loud, the drinks watered, the atmosphere in general anything but reverential, but all the musicians one ever wanted to hear played and sang there, from deep New Orleans traditionalists to the most modern of modernists.

And they seem to have enjoyed a convivial respect and pleasure in one another’s company, even when journalists and publicists tried to divide them into schools and warring factions. Elders took care of youthful strivers (Tony Scott was mentored and fathered by Ben Webster, for one) without any personal motive larger than the flowering and continuation of the music they all loved. Postwar cultural shifts (once you settle down in the suburbs, raise a family, watch television, and mow the lawn, you can’t stay out all night anymore) and other factors made the Street vanish. But its memory remained bright, a vision of a musical Eden where all was possible.

I first heard BLUES FOR THE STTREET perhaps forty years ago, on Ed Beach’s radio program honoring trumpeter Joe Thomas — the patron saint of sweet, measured simplicities that turn out to be deeply emotional — and his gentle, probing solo stays with me still.  Notice, though, that each of the players exhibits a truly personal voice — leisured but intense — while saying how much they miss The Street.

Later, in 1973-5, I was blessed — I do not use that word casually — to hear Joe Thomas in person, thanks to his dear friend, colleague, and advocate Michael Burgevin.  I will have more to say about Michael in the near future.

I hear this music as the conversation of the elders, the people who have Been There and Felt Deeply, murmuring their regrets at the loss, their joy at the coming-together, their hope to create something that would live longer than their breaths transmuted into sound. “Out of our sorrows at what has vanished we might make lovely songs.”

LOVE IS JUST AROUND THE CORNER was a quietly exuberant tribute to Pee Wee Russell and to the Commodore Music Shop, for Milt Gabler encouraged Pee Wee to stretch out on this pop song — a Bing Crosby movie hit — for one of the new Commodore Records in 1938.  Tony Scott, perhaps hearing in his memory the duetting of Pee Wee and Jimmy Giuffre on the December 1957 THE SOUND OF JAZZ, steps up alongside the Elder to say his own piece.

Music, like love, is always around the corner — even if that corner has been obliterated.

Posted in "Thanks A Million", Awful Sad, Bliss!, Generosities, Ideal Places, Irreplaceable, It's A Mystery, It's All True, Jazz Titans, Pay Attention!, Swing You Cats!, The Heroes Among Us, The Real Thing, The Things We Love