AMONG THE FAMOUS, A FEW REMAIN MYSTERIOUS

One of the most pleasures of JAZZ LIVES is that some people find it to offer information or to ask for help in solving mysteries. A few weeks ago I received a most pleasant email from a woman in the Middle West. Margaret had found JAZZ LIVES and hoped I could answer a few questions.

I’m writing to you because I think you may like jazz as much as my dad did. He loved jazz, had a huge record collection (now gone, sadly) and large library of jazz related books. One of them, Jazzmen, by Frederic Ramsey, Jr. and Charles Edward Smith, he took with him when he went to hear his favorite players, and got autographs.
It’s a very special book, with autographs from: Louis Armstrong, Jack Teagarden, Gene Krupa, Wild Bill Davison, Earl “Fatha” Hines, Marshall Brown, Pee Wee Russell, Herman Autrey (trumpet), George Wettling, Ruby Braff, Joe Sullivan (they were friends; Joe came to our house and he and dad exchanged Christmas cards) Jimmy MacPartland, Henry “Red” Allen, George Brunis, Meade “Lux” Lewis, Joe Venuti, Al Kipp, Muggsy Spanier, Eddie Condon, Bud Freeman.
There’s also a  Jim? P…? or Dueguis?, and possibly Gene Gifford. Also interesting, under Pew Wee Russell’s name is “e e mudder”. Please can you help me fill in the blanks?
My time in the English Department was helpful, and I told Margaret that I thought “e e mudder” was Pee Wee’s take on the poet e e cummings, someone he might have met or read or certainly heard of in all those years playing south of Fourteenth Street in Greenwich Village. But although I’ve done a good amount of handwriting-deciphering for book projects (as well as trying to figure out what my students might be writing in their untrained calligraphy) I couldn’t solve the mysteries. Perhaps JAZZ LIVES’ readers can?
Here are several pages from the writer’s father’s copy of JAZZMEN. 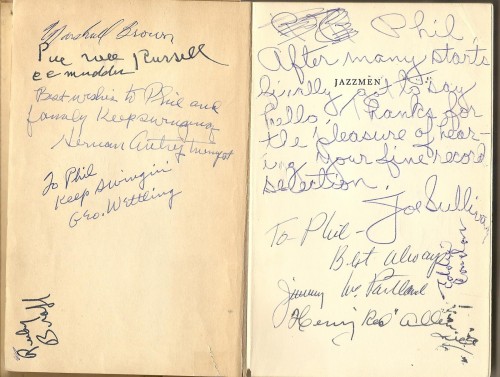 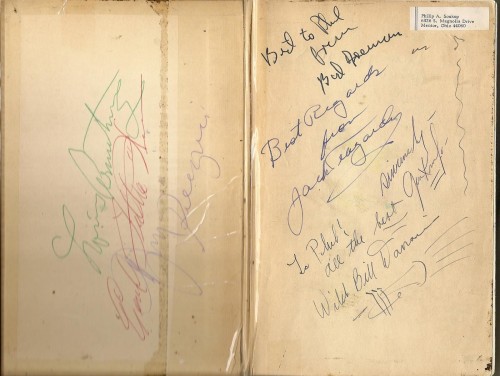 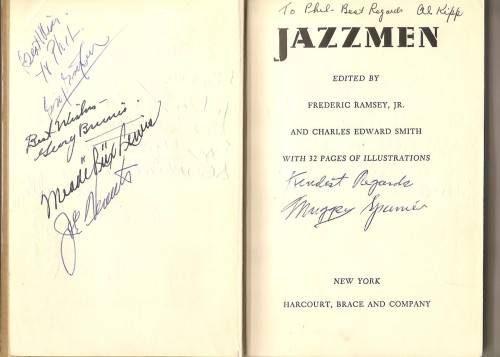 Left, possibly Zutty Singleton, certainly Georg Brunis, Meade Lux Lewis, Joe Venuti.
Right, Al Kipp, Muggsy Spanier.
Any suggestions about “Jim Deeguis”? and perhaps-Zutty Singleton?  And some biography on Al Kipp? Thanks to Margaret for searching me out, and thanks for the devoted Phil, who had such friends . . .
May your happiness increase!

Posted in "Thanks A Million", Bliss!, Generosities, Irreplaceable, It's A Mystery, It's All True, Jazz Titans, Swing You Cats!, That Was Fun!, The Heroes Among Us, The Real Thing, The Things We Love, Wow!