FROM THE STUDIOS OF STATION KLZ: THE DUKE VISITS COLORADO (1942)

More on eBay from the seller “anystuffyouwant” — some remarkable photographs, all new to me.

The first — not an Ellingtonian — is the short-lived tenor saxophonist Dick Wilson, who died in late 1941, less than two weeks after his thirtieth birthday. He played and recorded with Andy Kirk, a Mary Lou Williams small group, and he can also be heard on one of Jerry Newman’s uptown recordings with Harry Edison and Count Basie.  I’ve never seen a portrait of him in action, and I recall that Billie Holiday thought he was one of the most appealing men she’d ever known.

The next group of photographs shows the Ellington band — broadcasting over KLZ and in a ballroom. (I presume that they were on their way to California, but do not know if this tour pre-or-post dates JUMP FOR JOY.  However, the string bassist is Junior Raglin, not Jimmie Blanton.)

and an autographed portrait of the Rabbit, Mister Johnny Hodges:

What would the Ellington band have been without stylish Sonny Greer?

Finally, two people who didn’t get photographed as often as I would like. One, the utterly irreplaceable Ivie Anderson:

The other, a master of sounds — Tricky Sam Nanton: 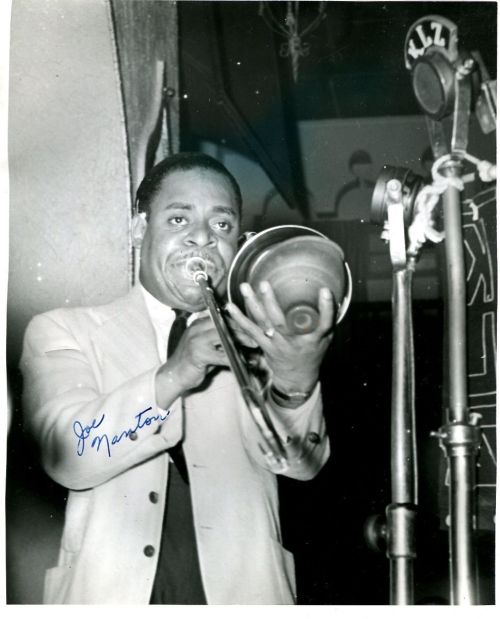 I’ve heard the Ellington band of that period on recordings and live airshots for many decades now, but these photographs bring the sound even closer to me. The other photographs I’ve posted from the same seller were all autographed to “Rollie”: did (s)he take these?  All mysterious, but the evidence that remains — even when slightly damaged by dampness — is wonderfully evocative. (My post on Rollie’s photographs can be seen here.)

The seller also has been displaying pictures of the Lunceford and Hampton bands . . . wonderful finds!

7 responses to “FROM THE STUDIOS OF STATION KLZ: THE DUKE VISITS COLORADO (1942)”