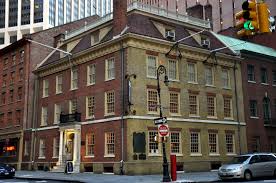 Fraunces Tavern is justly famous (it’s at 54 Pearl St, New York, and the phone is 212 968-1776) but I had never visited.  Even though I view Wikipedia with suspicion, this seems both detailed and accurate.  But I wasn’t visiting there this past Saturday afternoon to see where George and company bid each other farewell over dinner.  I confess that my idea of history is being in Louis and Lucille Armstrong’s turquoise kitchen in their house in Corona.

I was there because the trombonist / singer / composer Emily Asher has had a regular jazz brunch on Saturdays (1-4) and I had heard very good things about it, so I made my way down there to enjoy Emily, guitarist James Chirillo, string bassist / singer Sean Cronin, and a special guest.

I approached the first two sets as a civilian, drinking coffee (brought to me by a very sweet young waitperson), watching the ebb and flow of families, and digging the music.  Before I talk about the music, though, a digression.  I have a notebook when I go to any music, to write down information — song titles and the like — because I can’t always rely on my memory when I get home.  And I am a born eavesdropper and collector of things sweet and strange.

Here are a few samples.

While Emily’s Garden Party trio was playing, a large group of children was dancing in the adjacent room.  They were too young to know the Balboa, but they were having a fine time.

A man in his twenties looked at the band and said happily to his companion, “Oh, a little trombone action!” which was a good critical soundbite.

To my left sat a grandfatherly-looking man with what might have been a captain’s hat, surrounded by four or five pre-teenagers who might have not been his blood relations.  They were having a fine time, and he was talking with them about different subjects and eliciting their responses (as opposed to a monologue).  One subject was flags of the world, which I confess did not catch my attention.  But the subject that did was his grass-roots explanation of economics, which caught me because it had the enticing word CUPCAKES prominently featured.  Compressed, his explanation went something like this. “Everyone here likes cupcakes, and you can bake some and sell them for money and you hope to make a profit, and if they’re good cupcakes, then people are happy.  If you have a library, you don’t make any money, but the people who read the books get smarter and the whole society improves.”  I’m not sure that any of his acolytes were willing to give up the idea of cupcakes, but he was a sly and I hope effective economist.

Back to the music. It was tender, then it swung like mad.  STARS FELL ON ALABAMA, I’M COMIN’ VIRGINIA, and LOOK FOR THE SILVER LINING were dear and sweet.  Emily sang most fetchingly on VIRGINIA and SILVER; there was also heat on SOMEBODY STOLE MY GAL, SOME OF THESE DAYS, and a half-dozen others.  James Chirillo, the prince of swing, created a surrealistic masterpiece of a solo on THERE’LL BE SOME CHANGES MADE that would have pleased Stuart Davis or Magritte; Sean Cronin swung both with and without the bow, slapped the bass in the best Al Morgan manner, and harmonized with Emily on WHEN YOU WORE A TULIP. And — something new – – Emily picked up an empty coffee cup and used it in the best Vic Dickenson manner to make new sounds.  I was very pleased to see this manifestation of Vickensonian ardor.

By the final set, I had had enough of being a civilian and unpacked tripod and camera.  (Could I disappoint JAZZ LIVES?  Certainly not.)  So here are four treats from that set — and you’ll notice a young fellow with a trumpet.  He’s known here and abroad as Bjorn Ingelstam; he played wonderfully when I first met him, and he’s even better now.  (And April 1 is his birthday.  Happiness to the Youngblood!)

BLUE TURNING GRAY OVER YOU:

I WANT A LITTLE GIRL:

I know where I’ll be on some Saturdays to come.  You may notice that there is a hum of conversation, and I’ve often complained about this.  But the conversations I heard and overheard at Fraunces Tavern were sweetly reassuring, and I’d prefer them to the contemporary zombie glaze at the smartphone that I see too often.  (I am not alone in wincing at couples who go out for a meal and sit in silence, engrossed in their phones.)

Like Loading...
This entry was posted in "Thanks A Million", Bliss!, Generosities, Hotter Than That, Ideal Places, It's All True, Jazz Titans, Mmmmmmmmmmmmm!, Pay Attention!, Swing You Cats!, That Was Fun!, The Heroes Among Us, The Real Thing, The Things We Love and tagged Al Morgan, cupcakes, Emily Asher, Fraunces Tavern, James Chirillo, Jazz Lives, Louis Armstrong, Lucille Armstrong, Michael Steinman, Sean Cronin, Vic Dickenson. Bookmark the permalink.