To the most erudite readers, those who consult Geoffrey of Monmouth more than Facebook, the legendary island of Avalon is deeply significant in Arthurian legend: the Fortunate Island, the Island of Apples, the place where King Arthur’s sword Excalibur was forged and where Arthur went to die but remained immortal.  The best guess — only a guess — places the island somewhere near Wales. 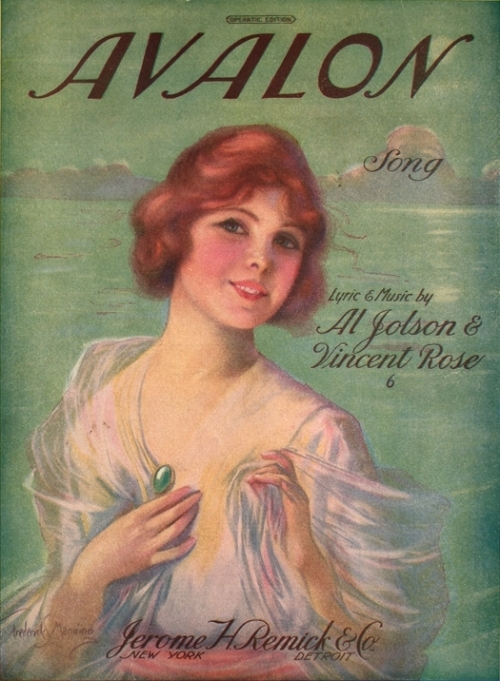 To others, AVALON is a hit popular song of 1920, composer credit going to Al Jolson, Buddy DeSylva, and Vincent Rose, yet its opening motif so close to a Puccini aria that the composer sued for plagiarism and won. (Knowing Jolson’s habit of cutting himself in on songs — that is, “Put my name on it as co-composer and thus give me one-third of the royalties, and I will sing it, making it a hit” — I think the song’s credit goes only to the other two writers. (Why only Rose and Jolson are credited on this cover is mysterious.)

Still others, and I am one of them, associate this song with unforgettable jazz performances by Red Nichols, Benny Goodman, Coleman Hawkins, Louis Armstrong and the Dukes of Dixieland, and many others.  The Goodman Quartet version has its own conventions: a descending riff near the end accented by a drummer — originally the Blessed Eugene Krupa — playing the pattern on the wood rim of the snare.  Charlie Parker recorded his own improvisations over the Quartet version, and the song continued to be immensely durable: ask Al Haig, Ted Brown, Lester Young, Art Pepper, Elmo Hope, Eddie Condon, Mel Powell, and Don Byas.

But back to myth and evidence.

Recent archaeological research now suggests that the Fortunate Island is located near or in Kecskemét, Hungary.  I could fill pages with the documentary evidence, but offer this video as proof.  This musical evocation of AVALON is so vividly alive here that I am convinced.  The researchers — a gallant international team — assembled at the 24th International Bohém Ragtime & Jazz Festival held in Kecskemét, Hungary, March 27-29, 2015.  The team had an informal name, but it will make sense once you understand the video revelations — Attila’s International All Stars, and they are Malo Mazurié (France) – trumpet, Evan Arntzen (Canada/USA) – clarinet, tenor sax, Attila Korb (Hungary) – trombone, Dave Blenkhorn (Australia/France) – guitar, Sebastien Girardot (Australia/France) – string bass, Guillaume Nouaux (France) – drums.

As a reward for patiently reading (or scrolling down through) my japes, here is a wondrously swinging AVALON by a band worthy of Arthurian legend:

I am especially delighted to see Attila Korb appropriately adorned, but that IS a stage joke.

You may order the festival DVD (in English) here.  And for more information about the festival, visit here.  All of this is thanks to the Producer,Tamás Ittzés, Kecskemét Jazz Foundation, who is a splendid musician himself, and to the legendary musicians who transport us to AVALON.

If you are ideologically fierce, hewing to your conviction that only people born in a certain nation or with a certain ethnicity or racial background can play “America’s classical music,” I propose an intensive course of aesthetic rehabilitation: listening to this video, eyes closed, for as many times as it takes to loosen the death-grip of those beliefs.

6 responses to “THE FORTUNATE ISLAND, FOUND!”