“Lo and behold!” is, by now, an archaic expression by which one refers to something surprising that has happened.  In this case, the surprises are all good ones.  (The record below belongs to William Berndt, who also took the photo.) 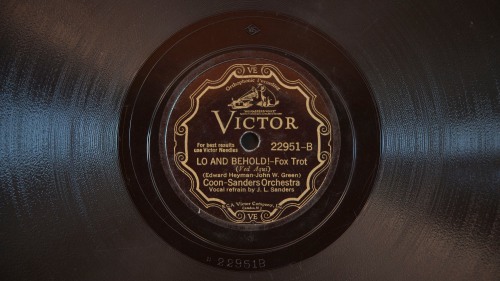 When Andy Schumm (multi-instrumentalist, arranger, composer, bandleader) came to the 2014 Whitley Bay Classic Jazz Party, he brought arrangements with him for a ten-piece band — which would have been a characteristic instrumentation in the late Twenties and early Thirties: three brass, three reeds, four rhythm.  At home, Andy and string bassist Beau Sample pilot a hot band called THE FAT BABIES (they’ve made two delightful CDs for the Delmark label and they have a regular gig in Chicago) . . . but the charts Andy brought held no terrors for the international luminaries at Whitley Bay.  In addition to Andy, there’s Menno Daams, cornet; Alistair Allan, trombone; Jean-Francois Bonnel, Lars Frank, Claus Jacobi, reeds; David Boeddinghaus, piano; Henri Lemaire, banjo; Malcolm Sked, bass and sousaphone; Josh Duffee, drums.  They performed — nobly — a lengthy set of hot music, dance music, an Oriental fox-trot . . . full of surprises, including a new Schumm composition in the best style and many new arrangements of venerable songs.  Herewith!

BABY (in the Guy Lombardo arrangement, with heat):

SHE REMINDS ME OF YOU (a song associated with Bing):

I WANT YOU, JUST MYSELF (homage to King Oliver with new solos):

CHINA GIRL (the aforementioned “Oriental fox-trot” with a wonderful outchorus):

I WANT TO GO HOME (a Joe Sanders arrangement):

SMILE WHEN THE RAINDROPS FALL (for Stan and Ollie, with a group vocal):

WHEN SHE CAME TO ME (comp. Schumm; manner, Goldkette):

And if you’d like to hear more music like this, the Mike Durham Classic Jazz Party is taking place in Newcastle-upon-Tyne, England, November 5-8, 2015.

A postscript.  I take public transportation to get in and out of New York City, preferring that to the stress of finding parking for my car.  So on the bus and on the commuter railroad, everyone has earbuds firmly mounted.  Often I can hear what they are listening to through the earbuds, which means that audiologists will never want for work — but I digress.  Whether or not you can make it to Whitley Bay, I would like all my readers who commute to save some of these videos for their trek to and from work.  It would please me immensely to think of people on the bus or train happily grooving to BABY or LO AND BEHOLD!  Do what you can, please, to help make my hot jazz / hot dance fantasy a reality.