THE IMPROBABLE MADE BEAUTIFUL (1977) 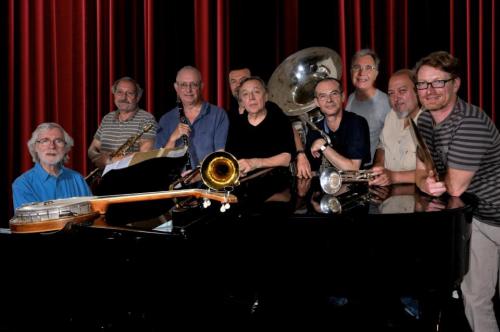 The Anachronic Jazz Band in 2012

I hope all JAZZ LIVES readers are familiar with the Anachronic Jazz Band — loosely translated, that’s “going against time” — a beautifully-rehearsed and inspiring jazz ensemble that plays modern jazz standards in the styles of the Twenties and Thirties.  With sincerity, accuracy, and wit they not only imagine worlds that never existed but translate those worlds into glorious music.  The AJB is a joyously playful band but also an exact one; they don’t just play music in a vaguely historical style; rather they take, perhaps, a Mingus composition and reimagine it as a Luis Russell recording.  They admire and they do not satirize.

They began in 1976 as a nine-piece orchestra led by pianist Philippe Baudoin and multi-instrumentalist Marc Richard, made several inimitable recordings, and then the members went their separate ways — reuniting in 2013.  Here ‘s my review of that CD.  And their website and Facebook page.

I want everyone to admire a particular AJB performance: a July 16, 1977 rendition — recorded and televised at the Nice Jazz Festival (“La Grande Parade du Jazz”) — of Thelonious Monk’s ballad ASK ME NOW.

But where Monk’s original is both passionate and spiky, the AJB reimagined this lovely ballad as played by Louis Armstrong (Louis, in this case, being Patrick Artero) with equally touching solos by Daniel Huck on alto saxophone and Philippe Baudoin on piano.

Ricky Riccardi, who lives Louis in his waking hours and dreams Louis in the three or four hours he’s allowed to sleep, would tell us that Louis indeed had a Monk record in his library — and transferred it to tape, his highest tribute.  Who knows that the two men didn’t cross paths in 1941 or 1942 or later?  But the AJB doesn’t simply write this as a musical science-fiction story; their rendition of ASK ME NOW sends love all around: to Monk, to Louis, to anyone with ears.

It gives me great pleasure to know that such things are possible.