This post was inspired by an object– odd, rare, mysterious — that surfaced here for a few days.  I assume that fans and “music lovers” still ask their idols to autograph objects for them, and the obvious one used to be a record.  In 2015, with so much music being conveyed digitally, does one go to a concert and hope that The Star will sign one’s iPhone cover with her Sharpie?  (I am not being facetious here; I think the owner of the 45 rpm single below had it easier.)

Whatever circumstances led to the owner of this record obtaining Louis Armstrong’s genuine signature on a paper label on top of another label, here we have the evidence.  And not irrelevantly, Louis had a particularly angular calligraphy: this was on sale at eBay next to a particularly inept forgery.  Starting bid $19.99, should you be curious.  I left it for another Louis-worshipper to buy, frame, possess, venerate, adore.  (Had it been one of the recordings Louis did with Gordon Jenkins, I would have indeed bought it.)

Update: For those who like financial dramas, the record sold for $55.78; there were four bids and the winning bid came in seconds before the bidding closed, perhaps suggesting someone with much eBay experience. 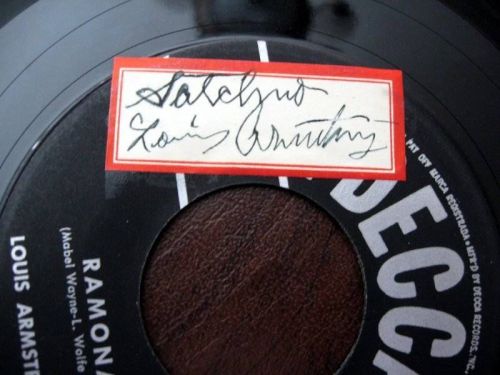 I find this fascinating on several levels.  Autographs are a gossamer bridge between us and the people we admire and revere: for as long as it took to write those letters, Louis Armstrong touched the piece of paper that we, too, can touch.

It is now possible to “do” the entire Louis tour.  Here’s the Oliver band, there’s Henderson and Bessie, Hot Fives and Sevens; wave to Lillie Delk Christian and to Johnny Dodds; big bands, Okehs, SONG OF THE VIPERS, Deccas, Victors, Columbias, MUMBO JUMBO, airshots and broadcasts, all the way up to THE NIGHT BEFORE CHRISTMAS.  It would take some time — one might need a college course to do it properly (calling Professor Ricky Riccardi of Queens College) — but much of the music is available, however poorly or incorrectly annotated, in cyberspace.

But how many people, like me, begin their Louis-journey with music recorded in the Fifties that has small credibility as “jazz”?  I bought many Decca compilation long-playing records before bravely encountering the Hot Fives and Sevens, and these — apparently not very important — records were my introduction to the man.  Legend has it that Joe Glaser, who managed Louis for decades, was always fiercely longing for a hit, a pop record that would sell millions and make money. Thus, we have APRIL IN PORTUGAL (originally written in 1947 and a substantial hit in April 1953) backed by RAMONA, from a 1928 film.

and the “flip side,” APRIL IN PORTUGAL:

I won’t attempt to elevate this “popular music” to the level of “high art,” except to ask you to listen closely to Louis’ trumpet on RAMONA, which to me is astonishing, and to the casual conviction with which he sings both songs.  And if you are one of those who refuses to surrender the myth that Louis, genius, was forced to parade himself and record such inferior materials when he should have been playing WEATHER BIRD, I leave you to your myths.

He did it; he could do it; he always did it.

This just in: if you’d like a truly comprehensive look at these performances, visit here.  But beware!  Ricky’s blogposts — although legal and non-caloric — are seriously addictive.

Like Loading...
This entry was posted in "Thanks A Million", Bliss!, Generosities, Irreplaceable, It's All True, Jazz Titans, Pay Attention!, Swing You Cats!, That Was Fun!, The Heroes Among Us, The Real Thing, The Things We Love, Wow! and tagged APRIL IN PORTUGAL, Ebay, Jazz Lives, Joe Glaser, Louis Armstrong, Michael Steinman, RAMONA, Ricky Riccardi. Bookmark the permalink.