TRAVELS WITH MOLLY: “LET’S FLY AWAY” 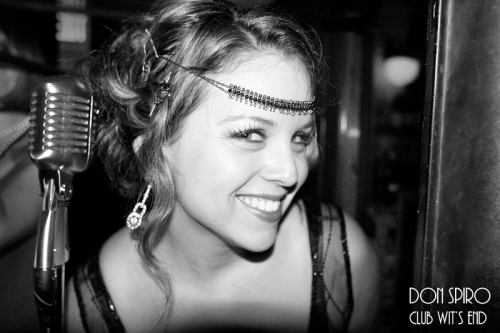 I’ve been admiring Molly Ryan’s singing — and her instrumental bandmates — for almost a decade now.  Her latest CD, her third, LET’S FLY AWAY, is a beautifully elaborate production, consistently aloft. 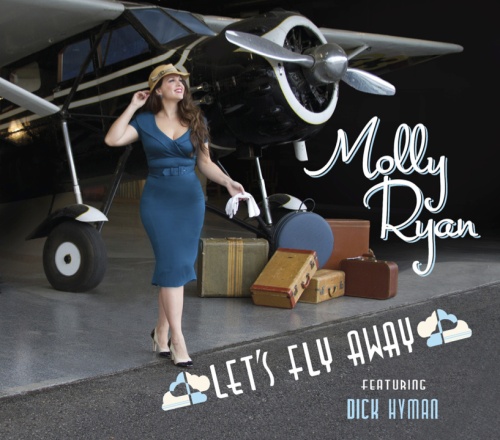 Here are the details.  The CD features a theme (hooray!) — the delights of travel, with some ingenious choices of repertoire:  WANDERER / BEYOND THE BLUE HORIZON / FAR AWAY PLACES / LET’S FLY AWAY / FLYING DOWN TO RIO / A RAINY NIGHT IN RIO / SOUTH SEA ISLAND MAGIC / THE GYPSY IN MY SOUL / THE ROAD TO MOROCCO / UNDER PARIS SKIES / TRAV’LIN’ ALL ALONE / IT’S NICE TO GO TRAV’LIN’ / ANYWHERE I WANDER . . .

When I first heard Molly — we were all much younger — I was immediately charmed by her voice, which in its youthful warmth and tenderness summoned up the beautiful Helen Ward.  But Molly, then and now, does more than imitate. She has a gorgeous sound but she also knows a good deal about unaffected swing, and in the years she’s been singing, her lyrical deftness has increased, and without dramatizing, she has become a fine singing actress, giving each song its proper emotional context.  She can be a blazing trumpet (evidence below) or a wistful yearner, on the edge of tears, or someone tart and wry.

The band, as you’d expect, is full of great soloists — everyone gets a taste, as they deserve, and I won’t spoil the surprises.  But what’s most notable is the care given to the arrangements.  Many CDs sound as if the fellows and gals are on a live club date — “Whaddaya want to play next, Marty?” “I don’t know.  How about X?” and those informal sessions often produce unbuttoned memorable sounds.  But a production like LET’S FLY AWAY is a happy throwback to the glory days of long-playing records of the Fifties and Sixties, where a singer — Teddi King, Lena Horne, Doris Day, Carmen McRae — was taken very good care of by Neal Hefti or Frank DeVol or Ralph Burns, creating a musical tapestry of rich sensations.

Now, below on this very same page, you can visit the page where LET’S FLY AWAY is for sale, and hear samples.  But Molly and friends have cooked up something far more hilariously gratifying — a short film with an oddly off-center plot, dancers, visual effects, hard to describe but a pleasure to experience:

Yes, it does make me think of Mildred Bailey’s WEEK-END OF A PRIVATE SECRETARY, but perhaps that association is my own personal problem.

Purchase a digital download of the CD (with two hidden tracks) OR the physical disc itself (with twenty pages of liner notes and wonderful art / photographs) OR hear sound samples here.

Airborne, delightful swing.  Why not FLY AWAY?  Let’s.

Posted in "Thanks A Million", Bliss!, Generosities, Jazz Titans, Pay Attention!, Swing You Cats!, That Was Fun!, The Heroes Among Us, The Real Thing, The Things We Love, Wow!

My title is, to me, the best one-line description of the Steamboat Stomp — happening in New Orleans, on the Steamboat Natchez, from September 18-20, 2015. 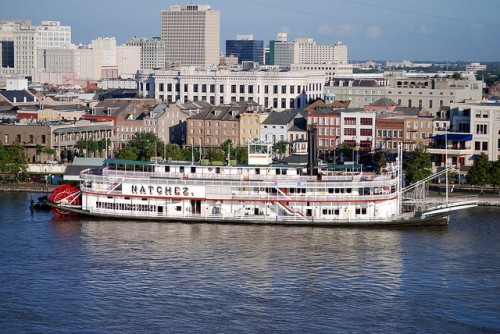 The schedule is here, and I can see myself fretting over it on the plane ride.  “If I see X now, I can’t see Y.  But I can see Y the next day.”  Jazz fest calculus, or perhaps chess.  But it’s always delightful to have more than one can handle rather than having long stretches of time.  However, on the Natchez, it’s entirely delightful to cruise up and down the Mississippi.  If one ignores the oil rigs outside, one can think of Huckleberry Finn.  Or, better, Fate Marable.

Here  is another site (the Stomp’s Facebook page) that offers different perspectives.

But here’s the best evidence, taken from the 2013 Stomp.

The official Jelly Roll Morton anthem of this carnival of joy:

Yes, you’ll have to pay something to board the Natchez, but your dollars will feel like dimes:

The way you’ll feel as soon as the music begins:

As Justin Wilson used to say, “I guarantee it!”