Before Facebook, before Instagram, before online dating apps that said YES or NO with a simple movement of one’s finger, technology and romance were always allied — perhaps uneasily, but connected.  Imagine the impact of inexpensive quick mail, or the telephone.  And then, the photograph.  And the moving image.  Hence this imaginative conceit: 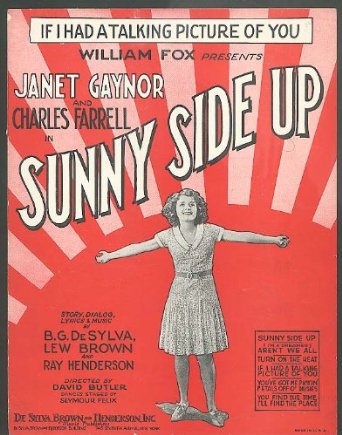 The bounce and optimism of the song might make us forget, for a moment, that the singer is sitting alone in his room, adoringly contemplating a photograph of the Love Object, wishing that he could move closer to an actual encounter — but the closest he can get is an imagined sound film of the one he yearns for, speaking from the screen.  And bliss?  Being able to run the film over and over.

I hope that the imagined lovers get to move from the realm of image into tangible reality, and that this song is “their” song —  now that they’ve been able to shut off the projector.

If you were there at this year’s Party, you’ll remember this delightful musical cameo.  If not, make plans for 2016 . . . I will share details when I know them. And for those keeping track: in the start of this video, we see and hear Thomas Winteler, preparing for the next set, and the many-talented Joshua Wyborn, who made the live sound come across to us so clearly.

Like Loading...
This entry was posted in "Thanks A Million", Bliss!, Generosities, Ideal Places, Irreplaceable, It's All True, Jazz Titans, Pay Attention!, Swing You Cats!, That Was Fun!, The Heroes Among Us, The Real Thing, The Things We Love and tagged 1929, IF I HAD A TALKING PICTURE OF YOU, Jazz Lives, Joshua Wyborn, Malcolm Sked, Martin Litton, Michael Steinman, Mike Durham Classic Jazz Party, Robert Fowler, Spats Langham, SUNNY SIDE UP, Thomas Winteler. Bookmark the permalink.