A friend told me about singer-songwriter Nancy Erickson’s new single, NEW YEAR’S EVE, and I’ve watched and listened to it half a dozen times.  Try it for yourself:

Doesn’t she sound beautiful?  Her focused, husky yet natural voice is a delight. And the song is hers, which is even nicer.  Nicest yet — for me, a true romantic — is that the song celebrates something more lasting than the first flush of what we often call love, something warming that goes on for decades.  Although much of the music of the last century-plus is about love, how much of it is about love that sustains itself?  I don’t hear this song as a gimmicky one to be tossed about between December 26 and 31, but as a real expression of feeling, something that can be hard to find these days.  Not glitter but substance.

You can subscribe to Nancy’s YouTube channel here, but you will learn more about her here.  And even here.

It takes a good deal to entrance me, but Nancy Erickson is well on her way.  I look forward to her new CD and more . . .

Posted in "Thanks A Million", Bliss!, Generosities, Pay Attention!, Swing You Cats!, The Heroes Among Us, The Real Thing, The Things We Love, Wow!

Steve Pistorius is an irreplaceable pianist, singer, bandleader, and visionary, and I love his Quartet — with a front line of Orange Kellin, clarinet; James Evans, vocal, reeds, and someone adept keeping time and swinging out the root notes — on this most recent occasion, Tom Saunders on bass sax.  The Quartet doesn’t strive to imitate anyone in particular, but what comes out is deep and swinging.

You could call it New Orleans jazz and not be wrong, but I think of it as four kindred souls having a sweetly intense conversation about the song at hand, where their intelligence and feeling raise up every note from what could be formulaic or prosaic. Here is what I wrote about their first disc, NEW ORLEANS SHUFFLE.  To read what I wrote about their second, UNDER A CREOLE MOON, you’ll have to buy the disc — which I’ll predict you would want to anyway. 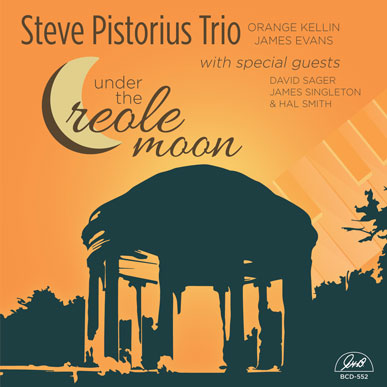 Now, this isn’t an advertisement for those two compact discs (although the subliminal energy is in my words, I hope) but a gift of music — a session on the Steamboat NATCHEZ recorded [by me, for you] during the 2015 Steamboat Stomp.

A cinematographic caveat follows.  I was shooting into bright sunlight through large glass windows, so there was a good deal of unsolicited glare.  Changing the videos to black and white helped cut down on the lurid aspect, but the four players are individually and collectively sheathed in what looks like swing ectoplasm.  Fitting, of course.  The sound, however, is fine and finer.

James rhapsodizes so wonderfully on YOU BELONG TO MY HEART:

Doc Cooke’s BLAME IT ON THE BLUES:

An Oliver rarity, I CAN’T STOP LOVING YOU:

Hot, intent, relaxed, soothing, compelling.  The best in their line.  And somewhere in these videos Steve says ruefully that this band has lost its regular gig.  I find that astonishing — in New Orleans, so proud of its music? — that I hope it has been remedied by now.  Club-owners and party-givers, take note.

And I will keep you informed about the 2016 Steamboat Stomp — something I hope to attend.