A COLLECTOR’S TROVE, AT AUCTION NOW

A cyber-friend and reader of JAZZ LIVES sent me the link to the Yonkers, New York auction house COHASCO, INC. , that is running an auction of jazz memorabilia ending January 5, 2016.  Much of the paper ephemera was new to me, and my friend thought it would be of interest to JAZZ LIVES’ readers.  So I am offering the information and the beautiful pictures here.  Full disclosure: I’m doing this for the usual reasons — interest rather than reimbursement — in case you needed to know.

The items are being offered as a collection: individual treasures are not available for bid.  And there’s been a good deal of interest in it already.

Here are three pictures that should speak louder than words: 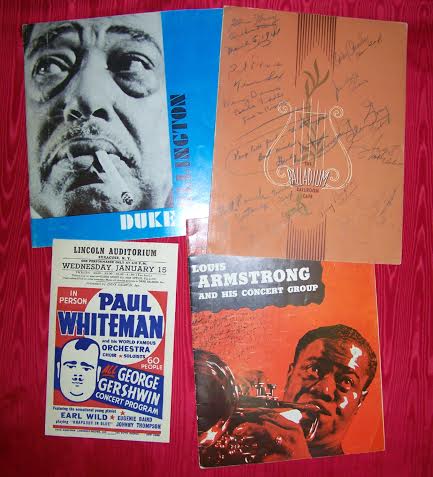 The consignor (who wishes to remain anonymous) has written these words, which should reverberate with many of us:

People collect all types of objects, from thimbles to stamps, to paintings and cars. I attribute my appreciation of swing and big band music to my parents. While other kids my age were enamored with the Beatles, I watched my dad carefully place a record player stylus down upon an old 78 rpm record and soon became captivated by the sounds of Harry James, Benny Goodman, Tommy Dorsey and other orchestras of the time. As I grew older, I realized that the melodies I enjoyed were truly the soundtrack to another era. As a record and memorabilia collector, the swing and big band music of the 1930’s and 40’s struck such a chord in the psyche, that collecting and preserving the ephemera of that era was a natural extension of my admiration for the music.  If I look at a ticket stub for a Benny Goodman concert, I suddenly hear Gene Krupa drumming the memorable beat of Sing, Sing, Sing, followed by Goodman’s sweet clarinet–like a sound wave time machine pulling me straight into the past. If I hold a Glenn Miller program I hear Miller’s theme song, Moonlight Serenade and in my mind’s eye, I see a newsreel projecting WWII soldiers coming home, marching back from victory and embracing wives and family. To me, collecting is about more than the ephemera itself, its a way to pay homage to not only the musicians, but to the “greatest generation.”

And here are some practical details about the collection.  It was “compiled over decades by an impassioned musicologist,” and its focus is on the Thirties and Forties, although the 235 vintage items are dated 1926-1966.

Capturing the golden era of Big Bands, some of the historic nights – and days – represented are 1937’s Benny Goodman vs. Chick Webb Battle of Swing, 1954’s landmark Festival of Modern American Jazz, Glenn Miller at CBS Radio Theatre, and many, many more. Additional venues represented include the Apollo (an early Louis Armstrong appearance), the Capital, Paramount, and Roxy Theatres, the Famous Door, Palomar Ballroom, Savoy Ballroom, Steel Pier, and others.

Much of the unsigned ephemera is very scarce – often magnitudes more so than signed material – and found only by chance. Duplicating such a collection would take many years and inordinate labor. The archive offers a wealth of materials, themes, and graphic choices for an all-encompassing display – or rotating exhibitions in a club, restaurant, performance space, academic music department, or favorite room of a home or office. Color montages on website and by e-mail. Request free detailed prospectus.