The great connoisseur of popular culture, especially women singers, Alan Eichler, just shared with us his VHS copy of the 1932 film HARLEM IS HEAVEN.  It’s a great gift, as it may be the first “all-colored” feature sound film, with starring roles for Bill “Bojangles” Robinson, Putney Dandridge, James Baskett, and with incidental music provided by Eubie Blake and his Orchestra, also with an appearance by Noble Sissle. 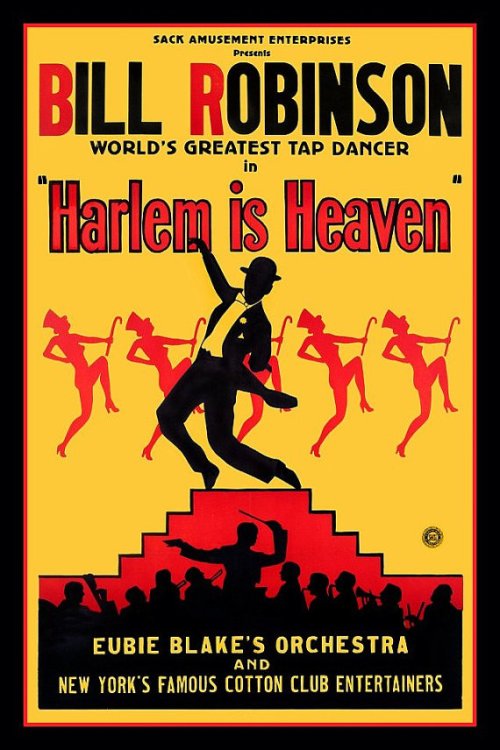 Now, I have reservations about the film itself.  Henri Wessell as “Chummy” and Anise Boyer as “Jean” are both beautiful young people, although their naturalistic acting is, to my taste, none too subtle.  And the plot (the film was written and directed by Irwin R. Franklyn) is thin to the point of transparency.

But what other film shows us so much of Bill Robinson as an actor, singer, and dancer — the stair dance sequence has been shown often but without credit, but the rest was new to me.  The dancers are presented to us as the world-famous Cotton Club entertainters, which is a look behind the scenes that we would otherwise not have had.

And this is serious business: is there any other film in the history of cinema that has Putney Dandridge as a deadly moral avenger who is never arrested or tried? I rest my case.

Even though I could not view the whole film in one sitting, I was captivated from the start by the little touches of 1932 Harlem reality: the marquee reading MILLS BROS. and the glimpse of the exterior of Connie’s Inn. Then, later on, there is a whole history of early-Thirties theatre and music and dance.  For fans of pre-Code splendor, “Jean” takes off her dress, revealing beautiful silk lingerie, while “Chummy” looks elsewhere, and later on there is a brief catfight between “Jean” and “Greta Rae.”  Worth viewing?  That’s up to you.

Posted in "Thanks A Million", Bliss!, Generosities, Ideal Places, Irreplaceable, It's All True, Pay Attention!, Swing You Cats!, That Was Fun!, The Heroes Among Us, The Real Thing, The Things We Love, Wow!