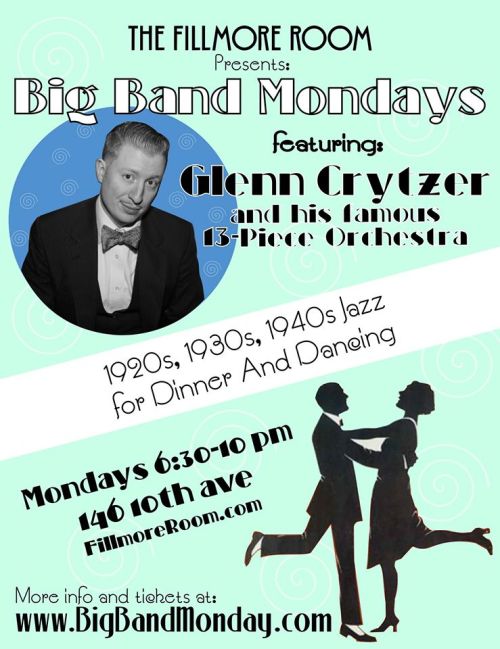 It’s lovely to see an enterprising musician take the risk of leading a big band — and Glenn Crytzer (compositions / arrangements / guitar / banjo / vocals) is just that enterprising.  Although most New Yorkers know him for his work with quartets and septets, his new Orchestra (four reeds, four rhythm, five brass) is creating a splash at the Fillmore Room — 146 Tenth Avenue at 19th Street — from 7-10 PM every Monday.  I was there last Monday, February 29.  You can’t see the brilliant dancers off to my left, but you’ll have to imagine them on a substantial wooden dance floor.

Ordinarily I wouldn’t post a dozen videos at one time, but I wanted JAZZ LIVES viewers to get a sense of the band’s sustained energy — the way it barrels through three sets.  And just maybe some viewers in the metropolitan area will be sufficiently inspired to make the pilgrimage to Big Band Mondays.

A MELLOW BIT OF RHYTHM:

THE ROAD TO TALLAHASSEE:

ME, MYSELF AND I:

Posted in "Thanks A Million", Bliss!, Pay Attention!, Swing You Cats!, That Was Fun!, The Heroes Among Us, The Things We Love