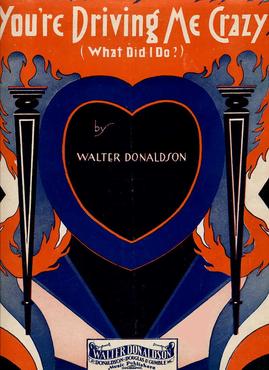 Walter Donaldson’s 1930 YOU’RE DRIVING ME CRAZY is one of those wonderful songs that — by now — sits midway between being an Old Chestnut and Almost Forgotten.  (How many people in the audience actually know the lyrics beyond what is shown on the sheet music above?)

Its lyrics are emotional, especially if you know the verse: the narrative is that a lover has treated the singer badly; the singer is weeping and asking the question, “What did I do to you?”  Very forlorn material.  I envision the song coming to life with one person telling another — “You!  You’re driving me crazy!” in the way that songwriters picked up on common parlance and made it memorable.

But, leaving aside the sad narrative, the song has always had a built-in bounce, and I cannot think of it without hearing the two bass drum thumps that begin Louis’ 1931 recording — drums played by the ebullient Lionel Hampton — and the joyous charge into swing that follows. Or, since Bennie Moten in 1932, who can hear the song without hearing MOTEN SWING as a countermelody?  So it’s a fascinating hybrid of heartbreak and joie de vivre.

Here we have a performance that marries the two halves: a sweet singer and a rocking band.  The singer is the wonderful Dawn Lambeth, who seems to float and glide, bending notes and reshaping them, but never obliterating the melody. And even at this tempo, you can hear the emotion of the lyrics.  And the band surrounding her is the epitome of swing: Ray Skjelbred and his Cubs, recorded at the San Diego Jazz Fest on November 27, 2015.  That’s Ray at the piano; Clint Baker, string bass; Jeff Hamilton, drums; Katie Cavera, rhythm guitar; Kim Cusack, clarinet — and guest star Marc Caparone, cornet:

There are far worse things than being driven crazy in this fashion.  See you at this year’s San Diego Jazz Fest, Novemner 23-27.