I don’t always speak to my college students about Literature; more often, I find myself standing at the intersection of Literature and Life.  So that when a student says to me that (s)he is exhausted because of working too many hours to pay for “things,” I encourage that student to consider, before springing to buy a glittery object, exactly how many hours of work it will cost.  I don’t know if my parental exhortation has any effect, but it is part of a cost / benefit calculation that has sometimes led me to put back something I was about to buy.

Cost and benefit is relevant here, because the person writing these words is still seriously exhausted by the previous weekend’s travel to the Rathaus, in Papenburg, in the larger territory of Westoverledingen, where the Generous Man of Jazz Manfred Selchow lives and has been staging concerts and tours for thirty years.  I know I spent more hours in transit than I did listening to music, but the ten-plus hours of the latter were and are precious.  A few notes follow. But first, a photograph (by my new friend Elke Grunwald): 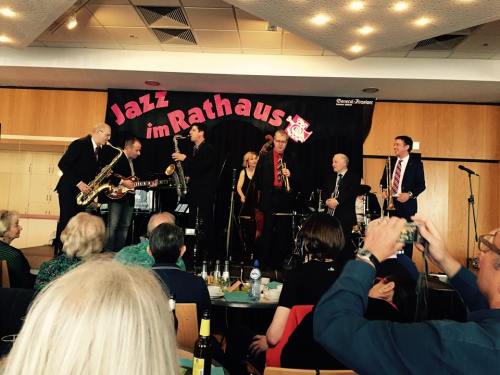 Friday night featured a two-set concert by Engelbert, Stephanie, Paolo, and Nicki — a group coyly termed SWINGIN’ LADIES PLUS 2.  The music was lively (TEMPTATION RAG), funky (BLUEBERRY HILL), riotously exuberant (THE WORLD IS WAITING FOR THE SUNRISE), multi-colored (THANKS FOR THE MEMORY), classic (SUNNY SIDE OF THE STREET, SHINE, LIZA, ST. LOUIS BLUES) tender (THE VERY THOUGHT OF YOU) and Brazilian (Nicki sang BRAZIL and played a samba medley).  I heard delicious echoes of Goodman, James P. Johnson, Garner and Don Lambert, but the quartet was itself as well as evocative, full of sweet surprises in ensemble and solo. 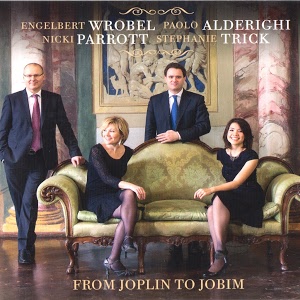 If you weren’t in the audience, you can still hear this group — their wonderful CD, FROM JOPLIN TO JOBIM, is available on iTunes and elsewhere.

And that was Friday.

Saturday, post-breakfast, was devoted to a necessary exploration of Sleep.  But at night, there was JAM SESSION NIGHT — four hours and more of sheer pleasure.  It began with a set devoted to Eddie Condon’s music and world, which was started off in just the proper spirit by Nico, reading aloud from WE CALLED IT MUSIC — in German — the passage where Eddie has to go to the induction center to determine if he is fit for service.  (The punchline, in English, is something like, “Get this man a drink!”)  After the laughter died down, Menno, Rico, Bert, Matthias, Niels, Nico and Moritz offered songs directly related to Eddie’s recordings and performances: LOUISIANA, WHEN YOUR LOVER HAS GONE, DIANE, OH, BABY!, THEM THERE EYES, a ballad medley, and MEET ME TONIGHT IN DREAMLAND.  The music also honored Milt Gabler and George Avakian, appropriately.  And it honored Eddie, with beautiful hot lyricism from everyone.

A short pause, and then Paolo introduced his clever AROUND BROADWAY — jazz classics that were originally show tunes in one way or another — with Engelbert, Stephanie, Nicki, and Bernard.  Berlin, Youmans, Gershwin, with intelligent but never pedantic commentary by Paolo.  And we heard HONEYSUCKLE ROSE, BLUE SKIES, OVER THE RAINBOW, ALEXANDER’S RAGTIME BAND, THE MAN I LOVE, and I WANT TO BE HAPPY.  (The audience and the musicians were already happy.  I saw this.)

One of the highlights of the weekend followed, a Hoagy Carmichael set featuring Menno, Matthias, Engelbert, Paolo, Nicki, and Moritz.  The classics were beautifully played and sung: SKYLARK, RIVERBOAT SHUFFLE, NEW ORLEANS, STARDUST, RIVERBOAT SHUFFLE, LAZY RIVER — with two delicious surprises: SHIM-ME-SHA-WABBLE, which Carmichael’s Collegians had recorded, although not a Carmichael composition, and THANKSGIVING, which was his work.  My marginal notations (what Stephanie called my “grades”!) were very enthusiastic.

Finally — who or what could follow that? — a set led by Rico in tribute to his mentor, idol, and ideal Louis.  A brief AIN’T MISBEHAVIN’ led off, then a seriously intent CHINATOWN, a more relaxed MY WALKING STICK, WILLIE THE WEEPER, a Rico-Niels duet on SWEET LORRAINE (unplanned and elegant), two versions of I LOVE YOU, SAMANTHA, YOU’RE LUCKY TO ME, A KISS TO BUILD A DREAM ON, and a two-tiered finale, merging STRUTTIN’ WITH SOME BARBECUE and WHAT A WONDERFUL WORLD.

A seemingly insatiable audience called for more, and got it — eleven players assembled for a Benny Carter-flavored I NEVER KNEW and a promise, WE’LL MEET AGAIN.

Delighted, thrilled, elated, exhausted, I went to bed as soon as I could.

After a perfect German breakfast buffet (I dream of these lavish assortments of food, I confess) it was time for Sunday’s JAZZ FRUSCHOPPEN (I now know that the second word means “morning / lunchtime drink,” another linguistic morsel for the word-hoard).  Bert, Rico, Engelbert, Niels, Stephanie, Helge, Nico, and Moritz took on the pleasure of honoring Basie in under an hour, with MOTEN SWING, SPLANKY, a plunger-muted feature a la Al Grey for Bert on MAKIN’ WHOOPEE, SHINY STOCKINGS, ALL OF ME (for the rhythm section) and a searing JUMPIN’ AT THE WOODSIDE.

Nicki led Menno, Matthias, Stephanie, Paolo, and Bernard through a tenderly swinging evocation (not imitation) of Billie, Teddy, and Lester, with ME, MYSELF AND I, LOVER MAN, PLEASE DON’T TALK ABOUT ME WHEN I’M GONE, SAY IT ISN’T SO, THE WAY YOU LOOK TONIGHT, STORMY WEATHER, and WHAT A LITTLE MOONLIGHT CAN DO — drawing on the best songs that Billie ever recorded, instead of A SUNBONNET BLUE.

And — a proper climax — a JATP set with a five-horn front line backed by Paolo, Helge, Nicki, and Moritz, which presented long versions of TEA FOR TWO, STOMPIN’ AT THE SAVOY, I SURRENDER DEAR, IDAHO, a BLUES FOR MANNIE, THEY CAN’T TAKE THAT AWAY FROM ME, LADY BE GOOD with Lester’s 1936 solo for two tenors, and an encore of PERDIDO, with swing rather than honking.

Yes, I video-ed the weekend, so those who weren’t there should not grieve.  It will, however, take some time for the videos to emerge: courtesy to the musicians requires that they be given a chance to see what they like or loathe.

A Manfred Selchow weekend is a jazz feast, and he’s been doing this and more for three decades.  We are all so grateful.