THE SKIES WILL CLEAR UP: BARBARA ROSENE / EHUD ASHERIE at MEZZROW 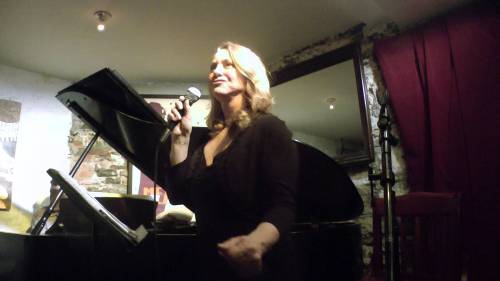 Barbara Rosene is a great, subtly emotive singer.  Her warm voice caresses the melody and lyrics, and her deep feeling takes us inside each song, making each composition its own small drama or comedy.  New Yorkers like myself have known this for more than a decade; if you’ve heard Barbara with the Harry James Orchestra, you know it as well.

Barbara and the splendid pianist Ehud Asherie performed two sets at Mezzrow (West Tenth Street, New York City) a week ago, on May 17, 2016.  Early in the evening, Barbara and Ehud offered one of my favorite songs, LAUGHING AT LIFE.  As she points out, most people know the song from Billie Holiday’s rollicking version — with elating assistance from Lester Young and Roy Eldridge — but it goes back to 1930, with recordings by Ruth Etting and McKinney’s Cotton Pickers.  (My guess is that John Hammond, who loved the older songs, suggested it to Billie, although the Goodman band was playing it on broadcasts a few years earlier.)

A sidelight: I had not known about this 1933 pre-Code film, which might not even have the song included, but who can pass up a poster like this?

To get back to our subject: I was instantly moved by Barbara’s rendition of the song — which could be sweetly maudlin in less subtle hands or sped up to “swing it.”  The tempo is perfect, and her delivery is sweetly, endearingly convincingly.  The rich textures of her voice are marvelous in themselves.

I don’t think anyone will be guffawing or chortling in empathy once the video has left its mark, but I know that Barbara and Ehud add to our collective happiness, as they always do.  (Ehud’s medium tempos are a wonderful education in themselves.)

And Barbara always has my permission to sit down.

Here’s the relevant evidence.  And there will be more music from this delightful evening at Mezzrow.  (A word about that club: it is comfortable in every possible way, and the music is lovingly the center of attention, as it should be.)