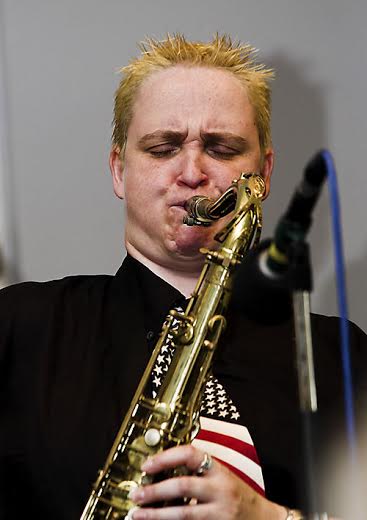 I first met Sarah Spencer (tenor and soprano saxophones and vocal) slightly more than a year ago and was immediately impressed by her deep immersion in the music — more specifically, New Orleans jazz (think of Cap’n John Handy) with digressions into Red Allen and J. C. Higginbotham, Al Bowlly, and others far and wide.  I wouldn’t get into a discussion of what “authentic” jazz is — too many potholes and roller skates left on the stairs — but Sarah played and sang in ways that seemed to come right from the heart, and she did her idols honor by evoking them while being herself.

Sarah had recorded several CDs but not much recently, so her new one — a selection of music recorded on location (Rochester, New York, October 18 / 19, 2015) is very much welcome. 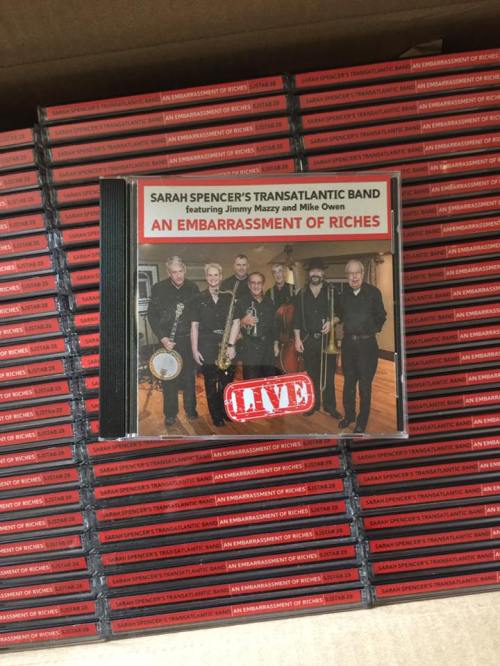 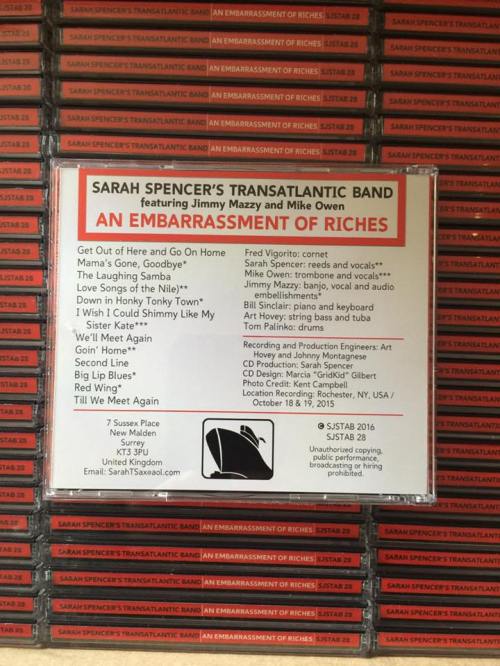 I think the details are readable, but a few words about the music are apropos.

First off, it’s her TRANSATLANTIC BAND.  Sarah was born in the UK, and trombonist / vocalist Mike Owen made the trip especially for the session.  The other members of the ensemble live and work on the East Coast, from Connecticut to Massachusetts, and their names should be familiar to traditional jazz devotees in that “Northeast corridor.”

The band is a refreshing hybrid.  I think that someone deep into the recorded legacy will recognize some respectful nods to legendary performances, but this is not an hour-and-change of “playing old records live.”  It’s audible immediately that this is a band that values both individual expression and ensemble improvisation, and several performances absolutely get up and romp as they gain momentum.  (It’s the kind of band where cornet and trombone both have metal derby mutes set up in front of them, if you get the reference.)

You can hear an enthusiastically involved audience, but no one claps along, whether on the beat or near it.

Sarah is distinctive — her rolling, bubbling tenor and soprano work goes in and out of the band (she thinks of herself often as a member of the rhythm section as well as a front-line soloist) and for all the people who come up to her after a set and say, “You really should listen to ______ or _______,” people she admires, she follows the more obscure but also satisfying path of Manny Paul.  Her singing is truly gutty and rich, fervent and occasionally raw (when the material demands it) and she never stands at a distance from the song, but jumps right in.

Here are two samples from the sessions, with a slide show of the players.

One begins the CD (a bit of whimsy, perhaps?): GET OUT OF HERE AND GO HOME:

and here’s LOVE SONGS OF THE NILE (video first, sheet music cover below: 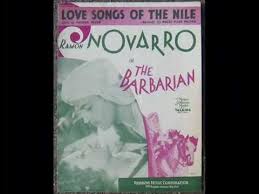 Other delightful vocal highlights on the disc come from Messrs. Mazzy and Owen, both deep into their own particular grooves.

The selections on the disc are wisely and sweetly arranged so that variety — not in some irritating way — is the principle.  Tempos, keys, and approaches vary from song to song, and there are several performances that are slower than medium tempo (always pleasing) with a stomping samba, sidelong glances at NOLA street parade conventions, and some deep blues.  The recording has some of the endearing imperfections that come with a live session (and I emphasize endearing) — all the things that I would rather have than the sometimes chilly perfection of a studio recording.

I’ve listened to the CD twice since its arrival yesterday, and I don’t see it as being shelved any time soon.  It’s honest, juicy music.  To get a copy for yourself, your friends, your extended family, email Sarah herself at sarahtsax@aol.com and let her know your thoughts.  The financial details are $20 for each disc (including postage and packing within the US); £15 (as above) in the UK.  Other countries will have their own special economic deals, and I am sure that Sarah would listen intently to a conversation about quantity pricing for double-digit orders.